As far as I know it was a quiet weekend on the racing front and with both road races and time trials being cancelled  on a regular basis I have to wonder if we are witnessing the death of cycle racing on open roads in this country. 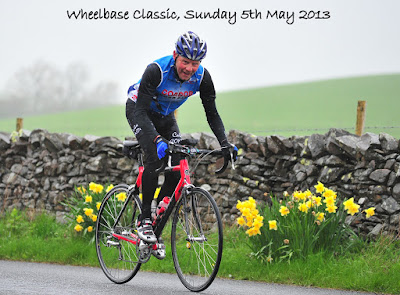 Melvin and myself left the clear blue skies of West Yorkshire to ride the re-arranged Wheelbase Classic Sportive which started outside the Wheelbase shop at Staveley, just the other side of Kendal. We were amazed at the numbers who turned up for this ride, over 200 for the long route and almost 400 on the shorter ride. We were setting off in groups of 20 or 30 at three or four minute  intervals. You could choose your start time, for the long course, between 8.30 and 9.30. I chose 9am hoping that Mel would start a bit later and settle into a reasonable pace before he caught me - alas, this was not to be and he joined me on the timing mat along with domestiques of the stature of former Olympian Des Fretwell. Fortunately we got separated on narrow lanes cramped with cyclists shortly after the start.
The route took us on quiet lanes to the north and east of Kendal before a timed climb of Barbondale over to Dent then the climb over Kingsdale, into strong winds and persistent rain to the feed station at Ingleton Community Centre. To cut the story short it started raining just after the start and just got heavier, I was soaked to the skin. I couldn't stop shivering at the feed and probably loitered there too long hoping that sweet tea and buns would warm me up. The route then took us up to Ribblehead and back to Dent, then north from Sedbergh on singletrack roads before crossing the M6 and meandering back to Staveley. During the ride I had teamed up with Phil Rawnsley of Bradford RCC and we worked well together keeping each other going and eventually finishing together with about 30th fastest times of 5hrs 27min. Mel was up there in the top ten with 4.46 (photos on the Sportsunday website show Mel taking pace behind a mountain bike - must be a story there) but Paul Daly, lacking team mates to ride with slumped to 5.35.
A very hard day weather-wise but a good, challenging route. 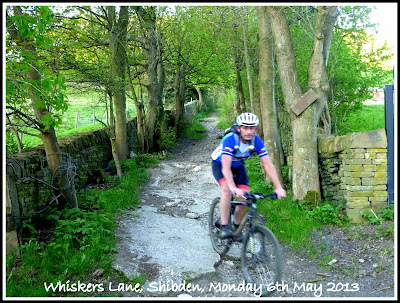 Just four out for the bank holiday evening MTB ride, Damian, Simon, Dom Turner and myself. We enjoyed tracks up through Chelsea Valley to Coley, Norwood Green, Judy Woods, Shibden Valley, Beacon Hill and Sunny Vale.  Good social riding - just what was needed after a hard Sunday - same time, same place next Monday - Hipperholme Cross Roads, 6.30pm.
Hope its a steady ride next week as Mel, Big Phil, Single Simon and myself have a 190miler, the Wiggy 300, on Saturday.
Good luck to Padiham Chris next Sunday making his debut at the Fred Whitton.