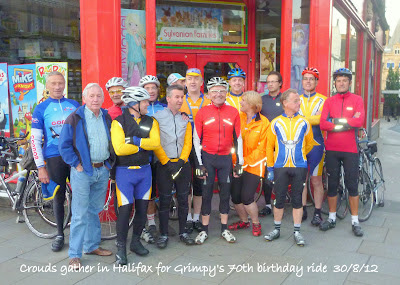 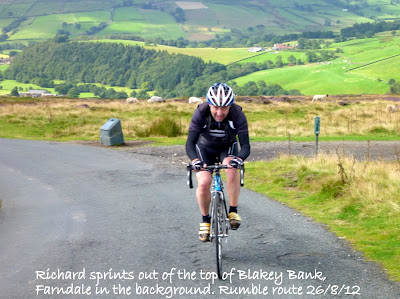 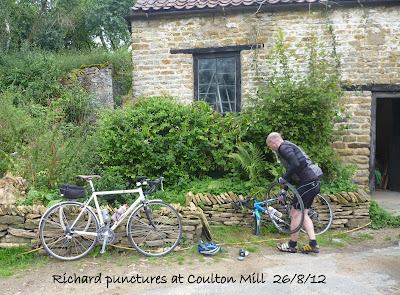 This Sunday Ravensthorpe CC are holding their annual 120 mile ride in memory of local rider Andrew Ridsdale who was sadly killed earlier this year whilst taking part in a time trial. The ride starts at 8am from outside the library in the centre of Mirfield. There should be a good turn out with several Condors already committed plus the Ritz Rebels giving their retro bikes an airing prior to the Eroica (Strade Bianche).
Posted by petehorne at Friday, August 31, 2012 No comments:

Good to see that the upper valley boys have started their preparation for the 2013 season, I hope to be out with you soon, lets hope that the Autumn weather is better than Summer. The poor weather doesn't appear to be affecting Brian - I haven't seen him for a few weeks but glancing at the CTT results page I see that he has returned 1hr 55min 50miles and a 54min 25mile times over the last couple of weeks - I'm sure he will try to explain to me why these are not good results when I do see him but the look pretty impressive to me.
I dipped a toe in the Sportive world for the 1st time for a few years last Sunday riding the Evens Cycles 'King of the Pennines' , a 101 mile route from Skipton.  I didn't expect there to be many riding this event due to the 'Ride with Brad' sportive from Barnoldswick taking place the same day so I was surprised to find over 500 cyclists signing on at Craven College where we were given breakfast  plus energy bars and gels for the jersey pockets. 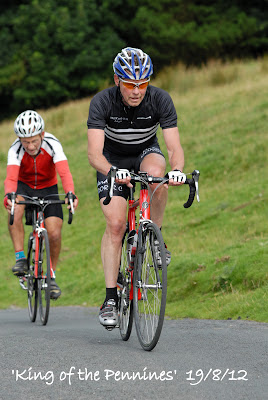 I teamed up with an old mate who lives in Skipton, Rick Small, and we went for the 9am start to give ourselves plenty of people to chase.  Rick certainly wasn't short of miles in his legs having just ridden home from the Mediterranean coast with his and his wife's camping gear attached to his bike in 4 panniers. However it didn't stop him being worried that he may be short of speed for the impending 3 Peaks CX.
The route took us down into Skipton then to Rylstone duck pond but via Stirton to avoid the by-pass roundabout. From Rylstone it was down to Eshton then up to Malham and climbed the left side of the Cove where a good number of riders were already experiencing difficulties - it was going to be a long hard day for some. Over Darnbrook to Arncliffe and up to Kettlewell for the 1st feed - Cake, flapjack, bananas, jellybabies plus gels and energybars and sportsdrinks for your bottles - rather impressive - I was obviously going to finish the ride heavier than when I started.  We then made our way up Langstrothdale and over Fleet Moss, I had been relieved to find that Rick and I were compatible up these climbs as I know that he can really push it climbing when he wants.  We turned right in Gayle then right and right again up to Countersett and Semerwater before taking a left down to Bainbridge.  The rain started at Akrigg but it wasn't cold so we soldiered on to the 2nd feed at Redmire village Hall. We loitered there for some time donning rain jackets when we set off again but taking them off again on the climb from Wensley over to Coverdale - still raining but too warm for the jackets. By the time we were on the climb to the top of Park Rash there were some big strong looking lads struggling but Rick and I, twiddling on our granny-rings were both feeling good and still catching up on the gossip. The descent of Park Rash was taken with care in the rain and after a brief stop at feed 3 at Kilnsey we headed via Grassington and Burnsall to the sting in the tail, the climb over Halton Moor to Embsey and back to the College for our 'goody bag' and meal. At £25 entry it was in fact good value for a great ride.

GET WELL SOON
Ian Wellock - Ian was run down by a motorist who 'didn't see him' (although another vehicle had already stopped in the other lane)  at Outlane roundabout a couple of weeks ago leaving him unconscious and with broken ribs and a broken coller which requred plating. I spoke to him yesterday and he sounds to have regained his usual self and is considering digging out his Turbo.
Clive Williamson - Clive has undergone surgery on his eyes and has invested in some hiking boots, he can be seen rambling over the Calderdale fells waiting for his sight to improve enough for him to return to his bike.

I must have caught the sportive bug 'cos I was going to enter the Rydale Rumble till I found out its been cancelled so I'm going to have a change of scenery anyway and do my own Rumble. I've got a 90 mile route planned this Sunday (26/8) from Sutton Bank car park including Blakey Bank, Rosedale Chimney and White Horse Bank (will shorten route if poor weather). I'm intending to leave Sutton Bank at 8am - if you fancy a day cycling in the North Yorks Moors let me know.
Posted by petehorne at Friday, August 24, 2012 1 comment:

A couple of weeks ago we took to the mountain bikes with Mr Holt for an impromptu Wednesday evening ride in the wild places about Hubberton Green on the top of the moor. Briefly, fleetingly, it was warm and dry, and clear and sunny. Shorts and shorts sleeves, carrying CamelBaks but leaving our woes behind.We worked our way along, exploring unfamiliar, untamed and overgrown bridleways and back down exciting new steep descents. So good we pulled our way back up Scout Road and found another packhorse path of well worn flags to rocket down. Just thought I'd mention it. You know it can be really good round here. Sometimes.

Then, just this past Sunday, we were honoured by the company of both Nigel and Richard for an extensive tour of the northern parish of punishment park, with no less than three crossings of the watershed from west to east and back, and back again - Isle of Skye, Meltham & Marsden to Diggle & Delph (Standedge Cutting perhaps, officially), then, regaining more familiar ground, Buckstones and back home. It started fine, we were well fed at the second cafe we tried in Uppermill, then set off for the major climbs with a bit of drizzle for company. Ah well, it was good to be out.

This week? Steve says he has a route. Something involving Bacup Road. I know, I know ...

Ian
Posted by Ian Robinson at Thursday, August 23, 2012 No comments:

Apologies for the late post. Nige, Steve & myself have a ride tomorrow from Hebden Bridge at 9am (traffic lights on the main road - in the centre of town). Off toward Greenfield and Isle of Skye. 50 miles. Low and slow. With a cafe stop. All welcome - send me a text if you fancy it and we'll hang on for you. 079 66 713 158. Ian
Posted by Ian Robinson at Saturday, August 18, 2012 1 comment:

If anyone fancy's a steady ride tomorrow I'm intending to do a route taking in Broughton, Winterburn, Thorpe, Burnsall cafe, back road to Cavendish, Otley and home in good time for the Pommel Horse Final.
8.30 Denholmegate - 9 Keighley.
Posted by petehorne at Saturday, August 04, 2012 No comments: