Pictures from the Red Rose

Thanks for Criss Crossland, David Dodwell and helpers for running another great ride last Sunday with the Red Rose Audax out to Glasson Dock.
The sky threatened showers but carrying a cape in my pocket all day made sure that it stayed dry (which is a small price to pay). The 55 or so riders who set off from Coleridge Street quickly strung out through Halifax town centre as we made our way up past the new B&Q and out onto Keighley Road. The route then includes a lovely little hill as a detour at the back of Keighley which, if ridden slowly, I'd go back and do again. Through Barrowford we then took a climb onto and along the ridge, where these shots were taken on Croft Top Lane. As you can see, the Condors made an effort to split up here so that we could each get separate photos - rather than coming through as one big flock! 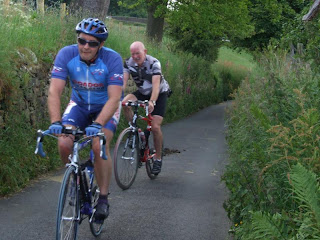 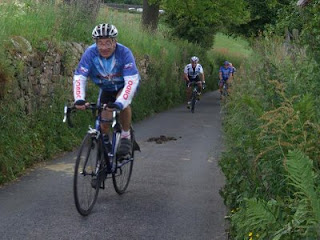 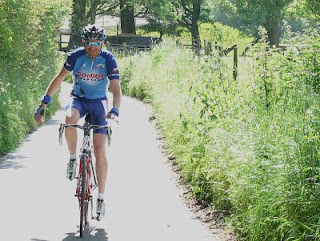 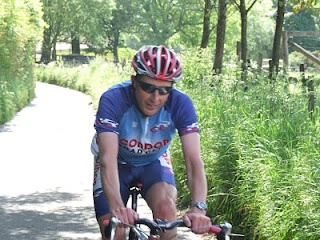 I was half considering packing at Whalley but carelessly arrived while the front group were still there and so was encouraged to carry on. A quick shot of coffee got me back on my bike and out to Mitton and Whitewell. The Trough of Bowland is a great road, but steep enough to split us up again. We saw lots of riders coming the other way - there must have been another event/sportive going on. Still, the Lantern o'er the Lune cafe was a welcome sight and we were all ready for a big plate of lunch (except Bob Johnson of VC167 who made do with a scone and a ham sandwich - I think you can tell who the fit ones are).
The run back through Garstang and Ingelwhite soon had me gasping for breath so I settled into my own rythm and enjoyed the scenery alone for the most part, occasionally bumping into the front group at stops in Longridge and Whalley. Then there was the satisfaction of arriving back to complete the ride - and have a cup of tea!
Posted by Ian Robinson at Friday, June 19, 2009 No comments: Links to this post