How different two Wednesdays can be. Last week a full compliment of 14 riders enjoying 80 miles of mild weather, this Wednesday only four riders braving a day of rain and mist.
The previous Wednesday started by a turn on to the Spen Valley Greenway. This easy start for those wanting to chat and cycle at a nice speed as you burn up the first few miles was interrupted by Paul Gower puncturing and early momentum coming to a stop. In fact it made it quite a long stop as he managed to pull out the total valve assembly from the tube, a feat not commonly used by experienced cyclists but performed with ease by the old fella!
The ride got back underway and traveled the Green way via Dewsbury and on the Ossett cycle way section through the edge of Wakefield and out to Methley Junction. Here we tried a new route (suggested by Mike Beecham) to cross the river over a footbridge and onto Allerton Bywater, missing out Castleford town centre could make this a route for future rides.  With mutterings from the ranks it seems that hunger was setting in so the cafe stop at the 'Bikers Cafe' was a welcome sight, all be it at a later time than usual!
The return journey also had some new roads included after going via Ledsham and Castleford the ride climbed up to Featherstone area and Sharlston then onto Crofton and Walton, crossing the footbridge to get to Horbury Bridge. A return onto the Ossett cycle way took us through to Dewsbury where the group had now split into three distinct clubs, the Condor, the Imps and the Alzheimers club, as decisions where to go had to be repeated a fair few times before the right direction could be taken. During the day Pete Horne managed to earn the nick name of 'slippery eel' as he managed to get out first at every junction, managing then to slip through lights at Dewsbury as others waited for a considerable spells of time and played catch up.
The ride gathered speed back up the Greenway it was then Paul Gower experienced his second incident by hitting the deck as an old guy on foot decided to stagger out in front of him, possibly an age thing I'm told! Not wanting to slow things down Neil put the hammer down as the group fragmented through Buttershaw and towards Shelf, the average speed of the ride doubling in the last few miles. 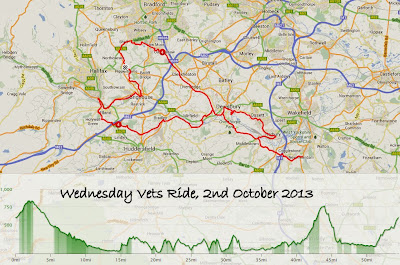 This Wednesday was a case of the brave or the daft! John Kaye, Paul Preistley and Pete Horne setting off at the allotted time in a strong downpour and Mike Beecham setting off more than half an hour later as it had stopped raining for a short while. The three riders took the Greenway and Ossett cycle way route in the morning to head over to New Millar Dam. Mike Beecham on instinct went that way too, entering the cafe twenty minutes later to tell them they were daft for going out in weather like this!
At least the afternoon proved more hospitable as the rain held off and allowed a route back to Horbury Bridge, Dewsbury and on to the trusty Greenway that then linked to the Caldervalley route through to Hudddersfield Road and then on to the Bradley side of the route. Coming back via the Old Halifax Road. The ride then went down to West Vale and onto the canal bank with a leisurely ride to the famous Paul Gower ‘drop’. A celebratory picture had to be taken to commemorate the beautiful bit of cycling performed earlier in the year where the old fella hurtled down a cobbled stretch without applying brakes, ended up on the floor and narrowly missed a canal swim and sinking his beloved Boardman! Happy days. 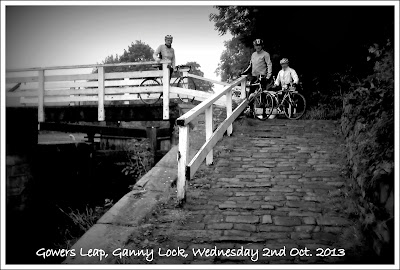 Thanks to Mike Beecham for making his debut blog - volunteers always welcome.
Posted by petehorne at Thursday, October 03, 2013 No comments: Links to this post