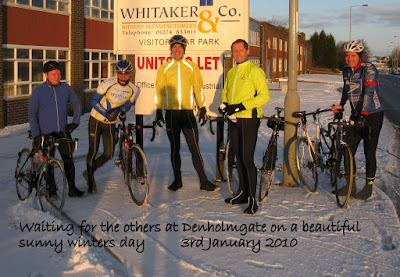 It was minus 4 when we met at Denholmgate but it didn't stay like that for long (it dropped to minus 5). However it didn't feel that cold, the sun was out, the skies were blue and all was right with the world untill we got to Kettlewell and found that both cafe's were closed. I reckon that Pete Whiteley must have known they was going to be closed 'cos he disappeared on the climb out of Skipton. It was good to see Pete out with The Condor again, I hope he wasn't put off by Damian's refusal to fit a mud flap to his guards. 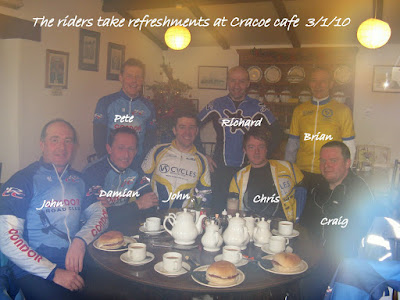 We went back to Cracoe and found a warm welcome there, plus the added bonus of not having as far to ride home. It did get a bit serious up Ingrow with the Racelight Tk's putting one over on the bog-standard T's but I reckon they've peaked too early - the North West Passage isn't for another 6 weeks. If you're wondering why the cafe photo is blurred its not the soft focus romantic look its condensation on the lens.

Posted by petehorne at Sunday, January 03, 2010 No comments: Links to this post