A late post - Robin and myself fancied a Bowland ride tomorrow, over Tatham Fell or Bowland Knott - with sustenance at Slaidburn. We also thought an earlier start - 8 at Denholme or 8.30 Keighley.
As I write this the rain is hammering down so fingers crossed for the morning.
Posted by Mel at Saturday, June 30, 2012 No comments: Links to this post

Posted by zapper at Wednesday, June 27, 2012 No comments: Links to this post 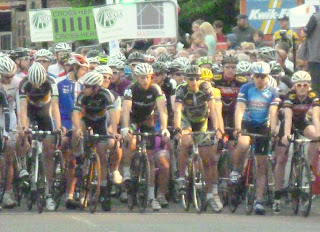 
Posted by petehorne at Thursday, June 21, 2012 No comments: Links to this post

Despite the quiet blog (hope the foots doing OK Peter !), and the discouraging weather, there is some bike riding going on.
Jubilee week-end saw me at Richmond for the tough '5 Dales' 100 miler, however due to road repairs after Tan Hill on the Keld to Nateby section we 'enjoyed' The Buttertubs route over to Hawes instead (then Fleet Moss and Park Rash). This did cut the distance down to 86 miles but far from being easier it was just faster. The improving Mr. Doherty joined Roger Palfreeman and myself to get it 'cracked off' in efficient style, unfortunately the Harrogate Nova trio were a bit more efficient and came in 4 minutes quicker. We managed 4 hours 35 mins. 19 mph average.
Last Sunday was the White Rose Classic resurrected by Ilkley CC. It proved very popular with a full field of over 1000 riders over 3 distances. A change from the original 110 mile route missed Malham and took us to Settle and over Attermire to Airton. Then down Wharfedale but still with the sting of Langbar to finish us off. ( I remember one year Nige had so much power still left at Langbar that he bent his rear wheel !)
Sundays posse consisted Robin, Dwarty, 'Bin man Thompson' and myself. The early miles had a bit of niggling headwind and after being passed by the fast boys at Fleet Moss we knew we weren't going to be top of the table today.
As we left Hawes to start the drag to Garsdale Head Dwarty's rear tyre blew out with some style. He confessed to spotting a lump on it earlier and thinking this could be terminal Robin and myself adopted the Pete Horne strategy of 'pottering on' - in any case we could only manage a potter over the Coal Road and up Dentdale. We were moving better down Ribblesdale but not as well as the VS duo who caught us at the bottom of the climb up Attermire.
It was a tough run in via Thorpe and Burnsall but by Langbar Dwarty's legs enjoyed a miraculous recovery which he used to distance us all as he struck out for the finish being chased by Robin and me but leaving his team mate. We may not have caught him but were helped by the appearance of a  timing point before Ilkley that Dwarty nearly missed.
We came in with 6 hours 39 mins. Top ten places but this time some 30 mins behind the fastest Harrogate Nova guys.
Its the Otley races tonight so I may see some familiar faces amongst the beers and bikes.

Riding tomorrow ... we'll be at Keighley roundabout at 9am ... some of the Heptonstall slackers have threatened to come along, and Steve

Skipton and back was a blast. The weather cleared by 7. The roads were heavy with the rain though, and we were picking our way lightly through traffic and roadworks most of the way out. Despite or because of this Damien (who has a loose relationship with cause and effect)  managed to get some quality time to himself off the front. Coming back and on another of his sortees into introspection initiated just before the main roundabout at Keighley bypass he was joined by two others who formed a handy break as the rest of us we were held up by slow lorries and then lights. VS were out en masse and enjoying soft pedalling (which they were very good at by the way, very cunningly disguising it as trying) whilst their break buddy pressed on. I was in two minds about whether to chase seeing as Damien was there, then decided to chase, having no idea whether he was actually still in the break, and wanting to feel that we had had a ride. We caught them up top of Ingrow, by which point I was well bushed, leaving VS to attack off the front in turns, whilst I got slower and slower in response. The elastic snapped for me on the last hill, and I left it to the others, with the young un losing to John by a cock length (Chris' description)

Posted by robin at Saturday, June 09, 2012 No comments: Links to this post

Janice kindly sent on the results from the ride to Skipton & back and amongst the 30+ riders taking part we had a few claiming allegiance to the Condor:

Thanks to the Imps & Hx CTC for organising. Maybe we can have a more detailed post from someone who took part? I thought about it ... too much. The bit of rain at teatime was enough to put me off.
Posted by Ian Robinson at Saturday, June 09, 2012 No comments: Links to this post