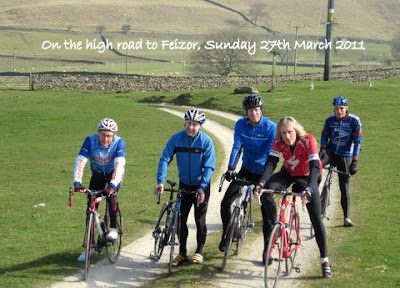 Pretty darned good day in the Dales; Yorkshire, particularly North Yorkshire on a bright spring day truly is ‘God’s own County’ I joined the three Petes, Stu originally from Bristol, Melvyn, Mick Collins, and Single Simon (sorry Simon don’t know your second name) at Keighley, we then proceeded through Gargrave and Airton towards the promise of bacon sausage and egg sandwiches at the intriguingly named hamlet of Faizor. We had Paul G and Paul H for company until Skipton and Brain until Airton where he turned. We then made our way through Malham up west of the Cove and over to Silverdale where we turned left and dropped down in to Stainforth. At this point we lost Simon who had to return home alone, single speed when he shipped his chain and managed to bend his rear mech hanger Faizor for those not in the know is about three miles north west of Settle at the end of a no through road, it might accurately be described as off the beaten track; little wonder then that this was the first visit for all except Pete H. We approached using a short cut over a rough track and dropped in to the village; the café and the staff exceeded expectations. 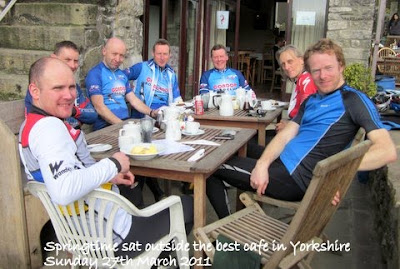 As we sat outdoors taking in the heat of the early spring sun life was good; so good indeed that we found it difficult to leave, however after Pete H and Mick had fortified themselves with apple crumble (who would have thought it on a bike ride) we readied ourselves for the journey home. As ever, for me, it was a battle for survival; I believe our route was through Wigglesworth and Paythorne however by the time we reached Gisburn I was ready for my own company and my own pace so I headed towards Skipton on the A59 whilst the bulk of the ride made their way home through Laneshaw Bridge and over Herders. Melvyn returned in the same direction as me but I didn’t see too much of him after the first couple of hundred yards; he did look round to see where I was at the top of the first drag but I waved on his way and thankfully he got the message. Postscript: Pete H had suggested that his route home might be quicker and he might well have been right. As I approached Queensbury having stowed my bike in my car at Denholme I noticed Pete H and Pete (?) ahead of me; unfortunately I was unable to berate them for riding two abreast as they took a left fork before I caught them - bugger! PS I believe Pete has some photo's that he plans to upload 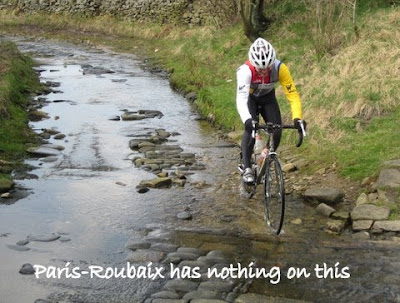 PeteH writes - What we didn't know was that PaulG had punctured on that pothole on the Gargrave road, the one that most of us hit whilst we were in a lineout behind Mel. Fortunatly Paul Hickey was more observant and stopped with Paul whilst repairs were made, they then made their way to Airton cafe.
After the cafe stop we had made our way to Wigglesworth not by the convensional route but by a scenic tour of Rome, Wham, Hesley & Long Gill - about 9 miles of singletrack, gated roads - not one motor vehicle seen.
After Richard and Mel abandoned us for the joys of the A59 we made our way via Barnoldswick to Kelbrook. I could see that the boys were getting bored with fast smooth roads so we took to the back lanes again and went to Laneshaw Bridge over the hills and through the 50yard ford by the golf course. Stu from Bristol (AKA Stu from Hebden Bridge) had been strong all day but was now feeling the distance and dropped off the back. Pete Smith suddenly remembered that he needed some speed work prior to pinning a number on next weekend (the first time for over 25 years) so he went for the Herders prime.
We regrouped at the top and pottered on to Stanbury expecting Stu to catch up - he failed to appear, Pete W volunteered to wait.
Great route, excellent cafe, good weather - halcyon days.