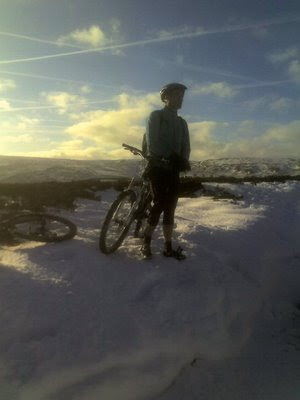 After a cracking mtb ride last week it was back to the muddy bikes again this weekend with Robin & Steve. We met in Hebden and climbed through Hardcastle Craggs up to "poo farm". Lower down the surface was frosty but gave good grip. Higher up and we began to slip and slide a little on patches of compacted ice, higher still and we had to work hard through some deep snow. By the time we descended "the field" to walshaw it was more like cross-country skiing!
The tyres made a great buzzing noise crunching through the thick snow. There weren't any tracks to follow but our own - so it was a choice between forging a new route off-piste or trying to follow EXACTLY in wheel of the bike in front (and steering, leaning, turning at the same time they did). Synchronised bikeing didn't work and I quickly went for the off-piste option.
We then headed up over the hill to Top Withens ("Bleak House") for more great snow-fields of fun. Then it got deep. Really deep.
In some places the snow had a hard icy crust and was like riding on tarmac. Then about ten feet later there'd be a footprint or weak spot that wanted to swallow my front wheel. So a mixture of riding and falling off ...
Which brings us to the photo here of Robin standing on a drift. This bit was like the cresta run - hard crust over deep snow lining the sunken track. One of the best sections of the ride. I was (almost) dissapointed to get back to the black stuff.
Posted by Ian Robinson at Monday, December 08, 2008 No comments: