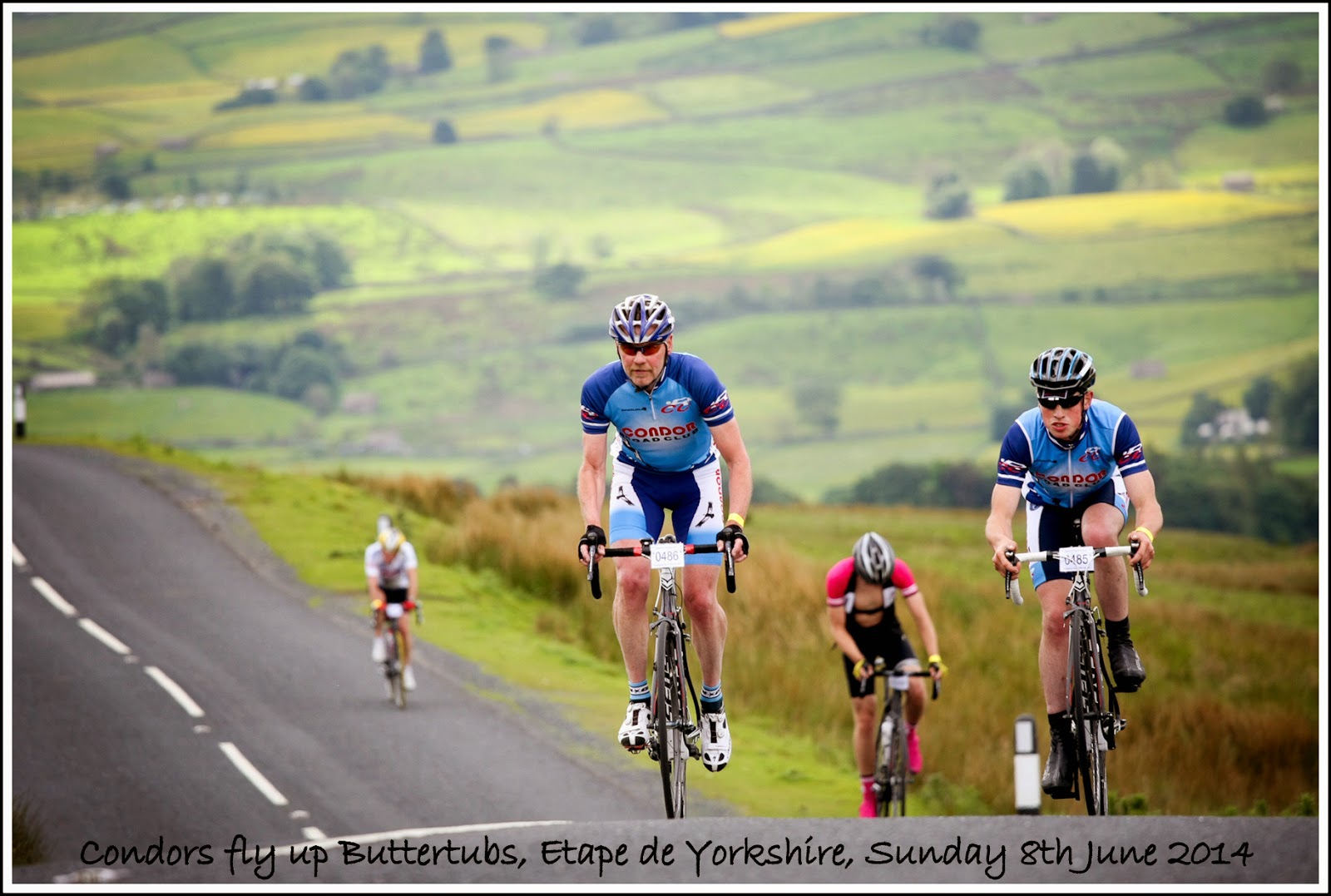 Whilst Mel and Grimpy were enjoying the real thing at Bashall Eaves, Chris and I joined about 11 hundred other riders at the Etape de Yorkshire, an imitation of a road race.  The sportive route was billed as being stage 1 of the Tour but using the excellent facilities at Leeds Grammar School for the start point rather than Leeds city centre.
We had been given a start time of 8.28am which gave us about 850 riders to chase, its always a great motivation to be able to see lots of riders in front of you and we were soon into our stride passing several large groups before turning into the Harewood Estate where all of a sudden we were alone, with me worrying that I'd been over-keen on our speed to the detriment of navigation.
However my worries were unfounded and we were soon back on familiar roads maintaining a speed which was no doubt comfortable for Chris but a little OTT for me. Our average was in the low 20's and we had been passing others with relative ease when on the Burley-in-Wharfedale bypass I was given a sudden reality check as a peloton of about 20 or so riders, driven at the front by several Harrogate Nova's, came past at such a speed that there was no way I could jump on the back.
I told Chris (once again) that he didn't need to sacrifice his own ride waiting for me but being a selfless team man he wouldn't have anything to do with sitting-in a group on non-Condors and he continued to to shelter me from a head wind over Chelkers and up to the 1st feed at The Old Hall at Threshfield.
From there up to Cote de Cray (thats Kidstones to us Yorkshire folk) we set a lively pace and amassed quite a group of followers, but soon split up on the contours where I allowed myself a slight chuckle to see a rider, even at this early stage of the day, laid at the side of the road experiencing the agonies of cramp.
It was quite hard into the wind from Aysgarth up Wensleydale, I had no option but to leave Chris at the front and we still had an average of 20mph when we reached the next feed at Hawes.
I suffered from this early pace as we made our way over the Buttertubs, but although my legs may have been feeling the pace you couldn't help but be inspired by the view of Swaledale as we descended down off the Pass. Swaledale is always a joy, but on a sunny Sunday with a helping wind there is nowhere in the world I would rather be.
After a toilet stop in Reeth we enjoyed the new road surface over Grinton Moor then the long steady descent to Leyburn and the 3rd and final feed at the Blue Lion at East Whitton. I was under the mistaken impression that the route from here was going to be relatively easy, down to Ripon, Ripley for a finish at Harrogate, I had been reassuring a guy from the Royal Marines that the remaining miles were a 'piece of cake' but when we got to Masham the sportive route took us right, down to Grewelthorpe, Kirby Malzeard and Grantly, a very lumpy route with a crap road surfice - I was really glad when we got to Ripley.
The finish was at the Yorkshire Showground where we were given a medal and a choice of hot meals.
We finished at quarter to four and recorded and average moving time of 18mph for the 123 miles - an average that fell quite a bit for me on our 12 mile ride back to Leeds Grammar School to collect the car.


Posted by petehorne at Wednesday, June 11, 2014 No comments: Links to this post