The suggested club run this week is 9:30 at Keighley - don't forget to reset your clocks, and to bring your cape.

Airton has been mentioned, but then so has Settle and Bolton-by-Bowland. Let's see how we feel and how the rain comes in. It would be good to get the westerly behind us at least for the homeward leg. I'll not be using the best bike.
Posted by Ian Robinson at Saturday, March 28, 2015 No comments:

Punishment Park (more punishing for some than others) 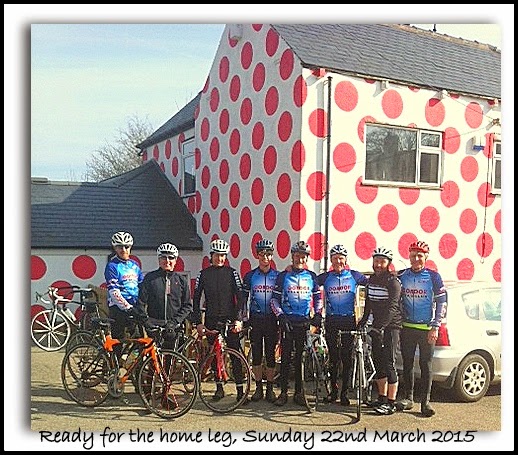 Good turn out for last Sunday's club run down to 'Punishment Park'. A great day for the classic circuit of Holme Moss, Snake and Strines, dry roads, sunshine and a temperature approaching 10 degrees. Robin's missing from the above pic, two café stops in one day was just too much for him so had ploughed along to enjoy Crowedge alone whilst we enjoyed the café stop and the back roads back to Calderdale. 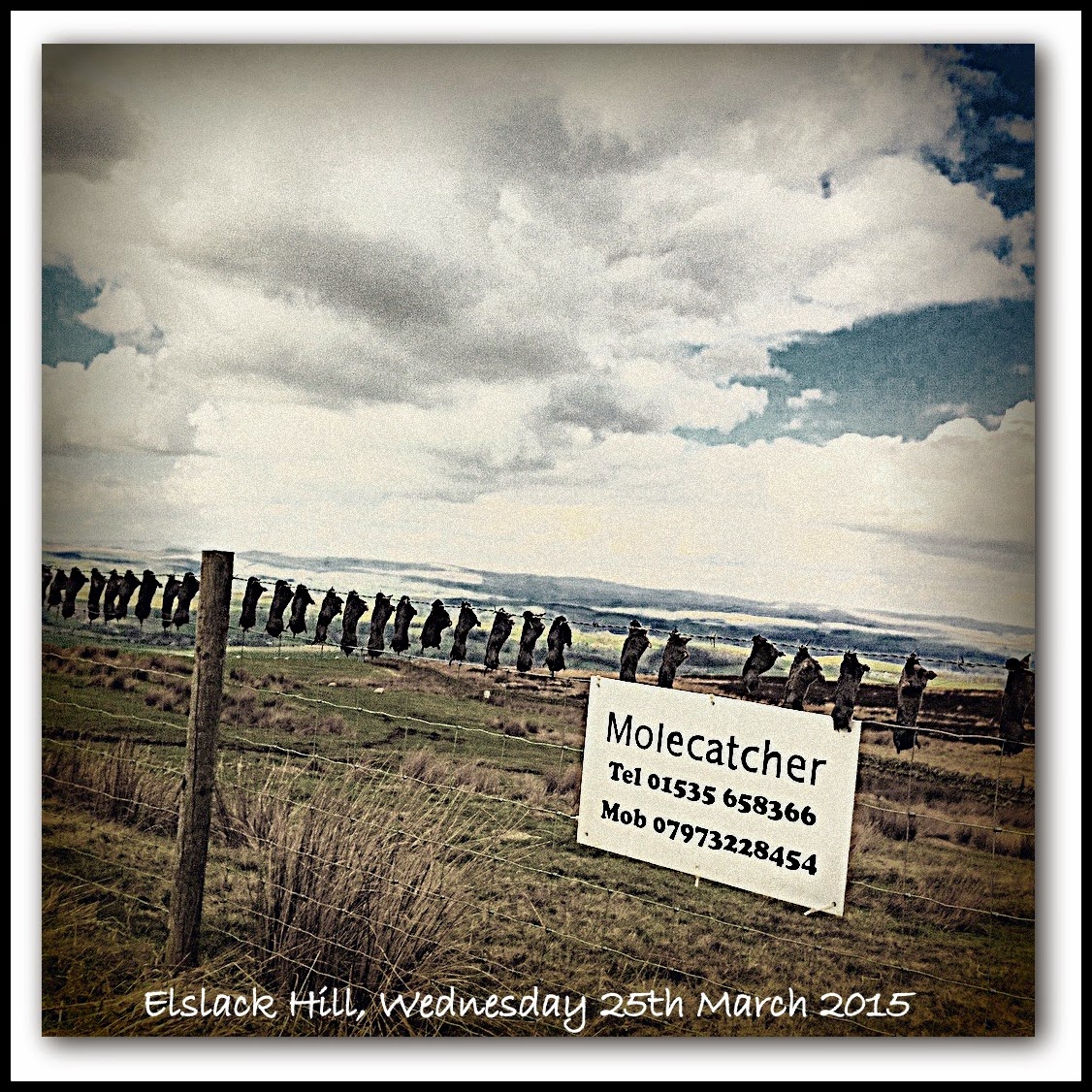 This coming Sunday Simon, Paul, Chris and myself are riding the Chirk 200. Poynton down to Wales and back. Its described as a flat ride but with strong westerly winds forecast so it shouldn't be too easy.
Posted by petehorne at Thursday, March 26, 2015 No comments:

A trip down to punishment park is proposed for this coming Sunday, meet 9am Sainsbury's Roundabout, Brighouse for Holme Moss, Snake & Strines.

Simon and I have entered the Chirk 200 Audax on Sunday 29th March, there are no entries on the day so if you fancy joining us get your entry in, on line, before 22nd.

Also on the itinerary is the Monyash Peak 100k Audax on Weds 8th April (Easter week), its challenging scenic route from Marple.   Paul D and myself rode it a couple of years ago in deep snow and were the only ones to finish so I'm hoping the weather will be kinder this year. I think its the following day that Paul boards the big bird in the sky to leave our shores pursuit of a better life in the antipodes so if you've promised yourself to give him some pain this may be your last chance.
For those looking for a flatter ride the Icecream Wensdae 100 is on the same day from the same location.

The following Sunday, the 12th April its our local Spring Classic, the Spring into the Dales 110k Audax from Mytholmroyd, organised by our friends from Halifax CTC.
Posted by petehorne at Thursday, March 19, 2015 No comments:


The Red Rose Ride
Another brilliant day was had this Sunday with a large number of riders attending The Red Rose Ride 200km Audax. Condor colours were a little thinly spread with only myself, Simon and Paul (who only threatened to ride to the Whalley control.
An 8am start through Halifax meant we were soon clear of town centre traffic and making swift progress with the early climbs sorting the wheat from the chaff.
Paul and I lead the front group down to Keighley and over Cowling, Laneshawbridge and over The Moss. A strong group including
Mick Collins, Simon Mayfield and Paul Ward.
We climbed over Padiham Heights, descending to Whalley and bidding adieu to Paul. Within moments Simon had caught us at the control and from here I rolled up the road with Mick and Simon navigating, at a steady pace.
Mick had told me that no-one could moan about a ride quiet as much as him, and this was surely true, as we approached The Trough Of Bowland. With a tailwind and the pleasant babble of Langden Brook, what could be better?
The descent to Abbeystead is one of my favorites. Simon said he was pleased he had conquered  The Trough and Mick just couldnt wait to sample the WHOLE new menu at The Lantern o Lune, which is now a bistro.
With only a brief rest-bite myself and Simon battled the headwind section to Longridge. Simon seemed thankful for my wheel which I gladly provided, but insisted that I press on now that we were on familiar roads. The road to Whalley was more undulating than I remember, but head down, ass up, I passed the few audaxers who had slipped us at the controls.
The climb up through Padiham and Burnley came and went, after all its one that's ingrained in my legs over the years. The Calder Valley was a sight to behold, with the bright afternoon sun reflecting off its steep rocky sides.
I arrived back to the HQ alone as the first finisher at 4.10pm, 5 mins before Chris Crossland had estimated me to arrive. As always a lovely spread of refreshments including the legendary trophy rice pudding was waiting. 10 mins passed when Simon arrived, having battled it alone, showing good form for his Paris - Brest -Paris lead up. Another 10 mins until the strong group we had ridden with earlier. I later passed Mick as I rode home still riding strongly as he approached Halifax.
Well done to all and thank-you to the organisers for another great route.
Chris Smith

This coming Sunday its the Red Rose 200k Audax, 8am from the Oddfellows Rooms, Halifax. Unfortunately I can't ride it myself this year but I'm sure it will as usual be well supported by the Condor.
Chris and I had an excellent day out last Sunday on the Yorkshire Gallop Audax, a good write up and photos can be found at http://balancingontwowheels.blogspot.co.uk/2015/03/yorkshire-gallop-200km-audax.html
Posted by petehorne at Friday, March 13, 2015 No comments:

(No So) Delightful Dales 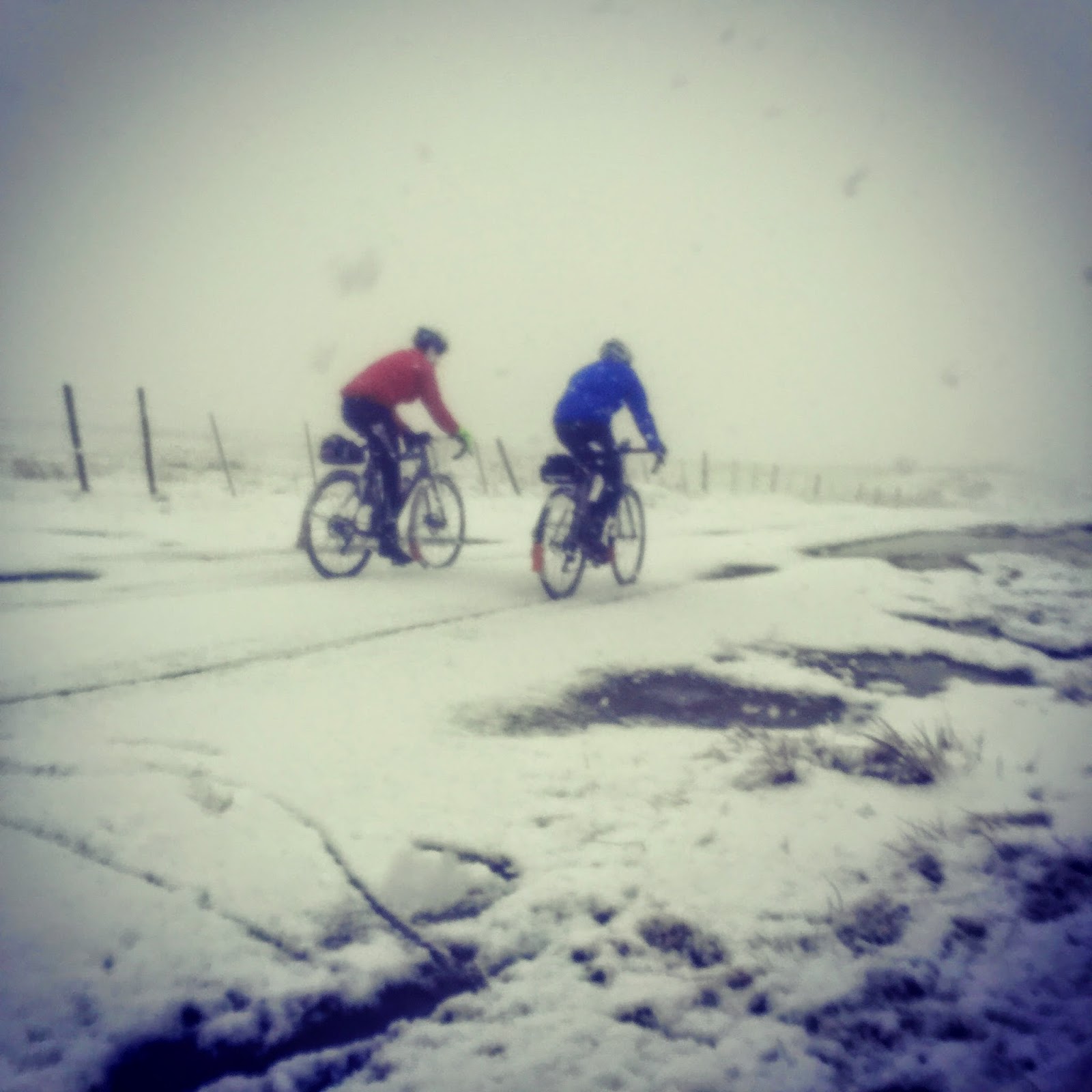 Chris and the author on The Old Coal Road

It was never  a great forecast for yesterdays Delightful Dales 200k ride but in my experience ﻿the weather is usually far better than the forecast - this is what I told Steve T when he let me know on Saturday that, after seeing the weather report, he had decided to give it a miss. However Padiham Chris and Irish John were not dissuaded by the possibilities of snow showers in the high Pennines and joined me and about 40 others to set out from Pendleton Village Hall at 7.30am on a dry but windy Sunday morning.

With a south westerly wind it was a pleasure to be blown up to Kettlewell and over Park Rash, there were even short intervals of blue sky in between hail showers as we raced down to the 1st check at Middleham. The ride over to Swaledale from Leyburn was not as hard as expected but once we turned west in Grinton we began to feel the full force of the westerly gale. However cycling in Swaledale can never be anything other than a beautiful experience although the undulations made sure I couldn't shelter behind Chris and John and I was happy to watch them disappear up the road, settling in to my own constant effort.

Towards the head of the dale I was caught and passed by the 5 times National Hill Climb Champion, Jim Henderson, he'd set off 10 minutes late from the start and was ploughing through the field, it was interesting to watch him in the distance pulling back Chris and John over Birkdale Common on the road to Nateby. 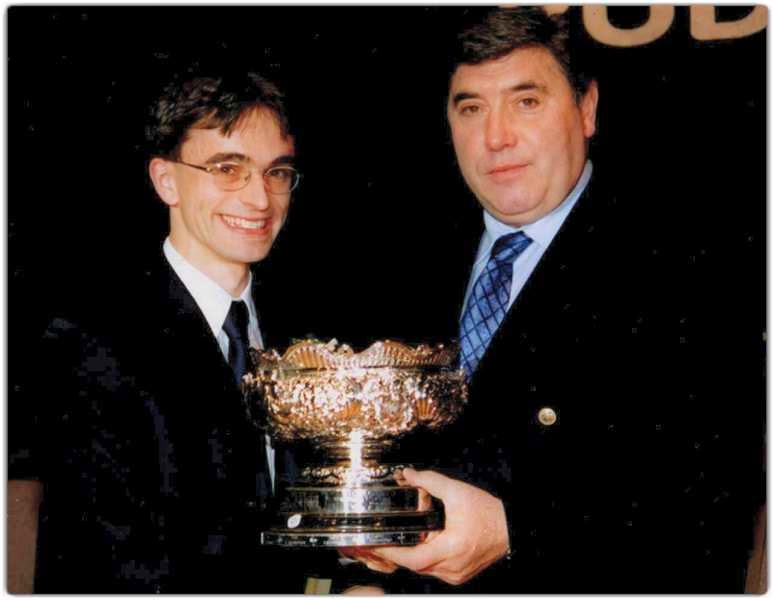 The 2nd and last checkpoint was at the pub in Nateby where after battling headwinds and hail I joined Chris, John and Jim. Unfortunately they not doing sandwiches but did a grand sticky toffee pudding and custard - I'm not sure I would have survived the next section without it. Jim declined to partake in the pudding fest and set off alone as we sat there, dessert spoons at the ready.

The hail was just beginning to turn to snow as we left he pub and it was surprising just how quickly it settled. By the time we got to the Moorcock junction at Garsdale, Chris and John were 100 yds ahead of me so any thoughts of taking what may have been an easier and lower level but slightly longer route to Ribblehead via Hawes were thwarted. The Old Coal Road over to Dentdale lived up to its reputation, I'd put a pair of new tires on the bike a few days earlier and they refused to offer traction even after letting some air out to reduce the pressure, this together with the cassette being jammed up with snow causing the chain to jump (excuses! excuses!) slowed progress.

However we battled on, I had to walk up Newby Head but was still making faster progress than several cars. Once back on the bike I had a couple of falls which began to make me ultra cautious. I was expecting conditions to improve as we dropped down towards Horton, they did, but only a little. John and Chris had a pint mug of tea and a toasted teacake ready for me when I got to the Pen y Gent café at Horton and once consumed we were off again. By Settle the roads had improved and by Wigglesworth we were on wet rather than snow packed roads making good progress again. It was good to get back to Pendleon. A few more observations of the days Audaxing can be seen here -
https://yacf.co.uk/forum/index.php?topic=88341.0 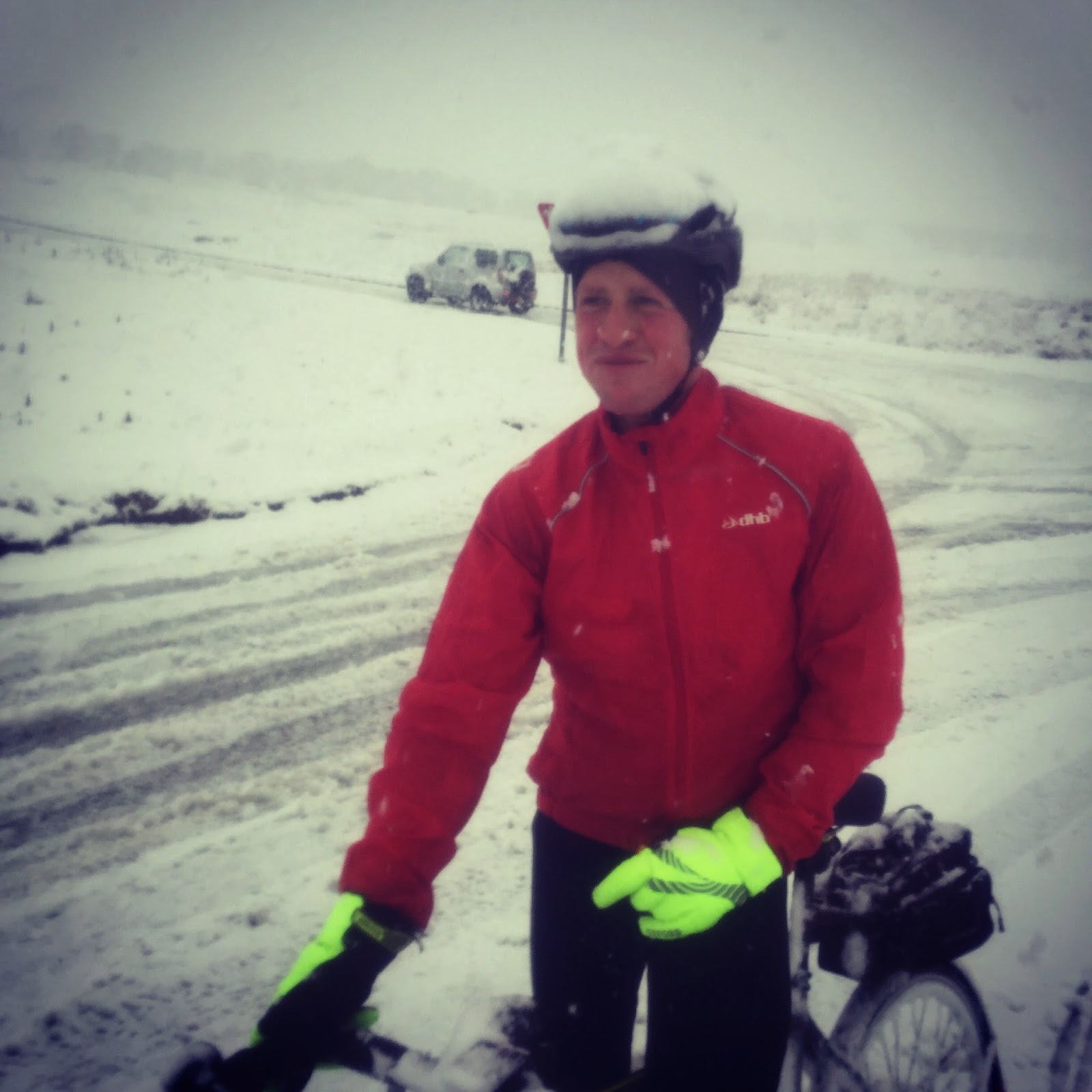 An ever smiling Chris waits for his team mate at Ribblehead
Thanks to John and his iPhone for the photos﻿
Posted by petehorne at Monday, March 02, 2015 No comments: