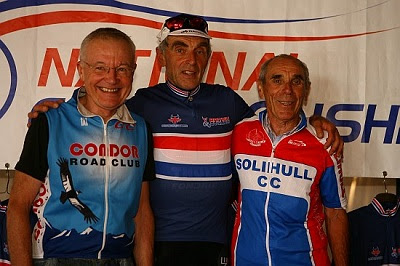 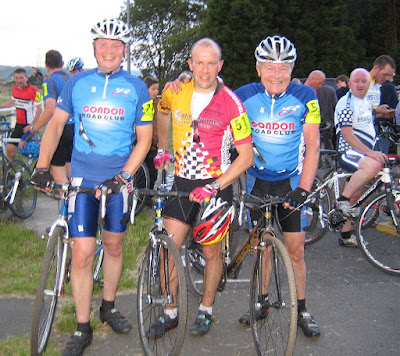 As you can see from the above Grimpy's been doing a lot of posing recently. The top pic is from the podium of last Sundays BC National Road Races held in Staffordshire, John took silver in his age group once again conceding gold to his 'bete noire' Mick Ives.
The other photo is taken at the end of last Wednesday's cyclo-cross at Greetland All Rounders and includes Steve Cavell and former Condor member Andy Whitworth (propriator of Tri Cycling at Kirkburton). John not only took the over 60's but he also beat the over 50's. This was the last event in the Yorkshire summer series, Steve was 3rd vet 50 overall.
Brian appears to be going well (although he would no doubt deny it). I've managed to find a few of his results on the net from the last couple of weeks. He took bronze in the Vets National 25 mile TT Champs, the following week he won his category in the LVRC Road Race at Stokesley and last Sunday he was 5th overall in a quality all age group field in the Pennine CC '50' witha 1.52. He did'nt defend his National 100 mile title but will be riding the YCF 100 next Sunday.

Posted by petehorne at Tuesday, August 07, 2007 No comments: