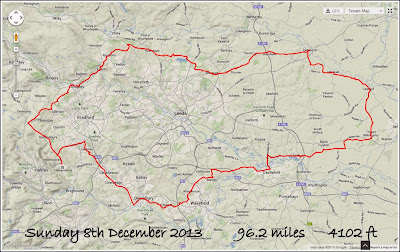 Only two at Odsal this morning, Myself and Steve Thewlis.  We hung around for a while expecting Padiham Chris to show but eventually decided we must make a start. A tail wind helped us set a brisk pace round the Greenways to Ossett and we continued in the same vein seeking out the quieter lanes to Castleford then through Fairburn Ings and flat arable lands to Thorpe Willoughby and up to Cawood. From there the byways became a little harder as we turned into the once helping breeze.
Chris had phoned me to apologize for missing the start time and was making his way through Leeds towards York, I told him we were heading for the cafe next to the bike shop in Tadcaster and eventually found him sitting outside the cafe at quarter past twelve.  The cafe was surprisingly quiet and we were soon enjoying our lunches.
Once refreshed we headed homeward via reasonably quiet back lanes through Bramham, Shadwell, Eccup, Bramhope, Guiseley and Esholt. At Shipley I was keen to show off Yorkshire's UNESCO World Heritage Site to our red rose team mate so we turned right past Salts Mill and through the back streets of the Victorian model village. By the time we were half way up Moorhead Lane past the golf club I was wondering if this had not been my best ever idea. Of course Chris hardly seemed to notice it was up-hill, very steep up-hill, as Steve and I watched him disappear into the distance.
We had enjoyed good weather so far but by Sandy Lane the temperature dropped and rain, which had started lightly as we were climbing out of Saltaire, was getting heavier and heavier. We said our goodbye's to Steve as he headed towards Cullingworth and, once we were wet through, stopped to don rain jackets before negotiating head winds and driving rain through Egypt, the Walls of Jericho and Moscow.
Chris left me at Queensbury for 30 miles of head winds and rain.
A thoroughly enjoyable day out.
Posted by petehorne at Sunday, December 08, 2013 2 comments: