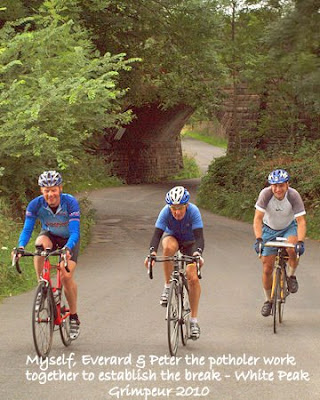 Myself and other assorted Condors & Imps have been riding the Peak Audax Grimpeur Series, 5 Wednesdays from the end of July to the end of August - here's a few photos. There's 2 left if you fancy a day off work. 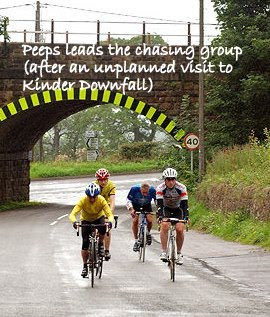 Last Wednesday it was the White Peak, a 105km circuit with nearly 8000ft of climbing. A navigational cock-up split the main bunch in Hayfield with Peeps and Brian (plus others) following the road to Kinder Downfall (ignoring the no through road signs). Myself and Everard kept faith in my GPS and soon corrected ourselves but Paul and Brian placed their faith in three lads who 'looked like they knew where they were going.' 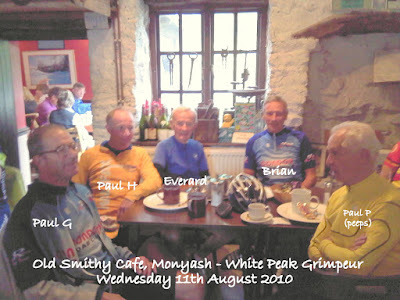 Anyhow we re-grouped at Monyash cafe where we spent an hour or more being noisy before riding back together to the finish at the Ring o' Bells, Marple (Robinsons excellent ales) 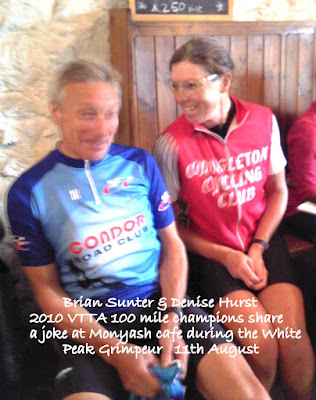 19th September - Bradwell Grimpeur 120 or 200. I'm hoping to ride the 120km event. They're organised by Danial Webb, he lives in Tod and has joined the Condor. Danial is also organising an Audax on behalf of the Condor, the 'Todmorden Loops', 100km, on the 13th of March next year so make sure you keep in shape this winter. Brian, Richard and myself rode one of Danial's events in the Peaks last autumn and in addition to a great route the catering both before and after the ride was second to none.

Posted by petehorne at Saturday, August 14, 2010 No comments: Links to this post