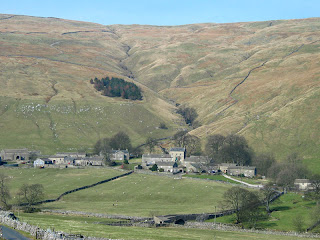 The storms and snow that were threatened didn't arrive and a big bunch of well over a dozen riders set off from "base camp" through Keighley. However, like all epic tales, there were casualties and detours along the way. By the time the final assault began on the summit of the Silverdale climb only three riders remained ...

A left turn in Crosshills onto the back road to Gargrave was my plan - it is just that very few wanted to follow and that left four riders going one way and the rest heading out on the main Skipton road. The gang of four who put in the extra hill had to dig deep in the hope of catching the bunch by Carleton ... only to find that Steve and Robin had already blown the group apart chasing non-existent ghosts up the road. I doubt that they ever caught us, cos we weren't ever ahead of them. Nigel, Damien, Dougie and one or two more had waited for us and for a short while we were back into a group. Nigel then announced that he had an urgent appointment back at home with some cardboard boxes, Dougie went straight on in Gargrave - presumably straight to Cracoe because he was never seen again. The rest vanished into thin air.

On through Bank Newton, Paythorne and Rathmell we were making good progress into Settle with a tailwind, plus the odd hail shower to keep us on our toes. Damien was the next unfortunate to be taken by the gods of the road. He was with us going into Settle, but didn't come out the other side and there were no wheel marks to show where he might have gone. Was he taken by the Naked Man?

Having started out with so many riders, sheer bloody-mindedness at this point meant that we just had to complete the stated aim and go over Silverdale. The final three of Ian, Melv and Richard were left to enjoy a great wind-assisted climb over the 'dale and take in the fabulous views of Pen-Y-Ghent before dropping down to Halton Gill. A run down Littondale (on the left-hand side, of course, Peter) took us on past Kilnsley to the cafe at Cracoe and some award-winning butties. Fuelled up we then had a short final leg back home.

Now, if only we can find a way of riding together for more than five minutes we might be able to start some sort of cycling club :)
Posted by Ian Robinson at Sunday, March 09, 2008 No comments: Links to this post