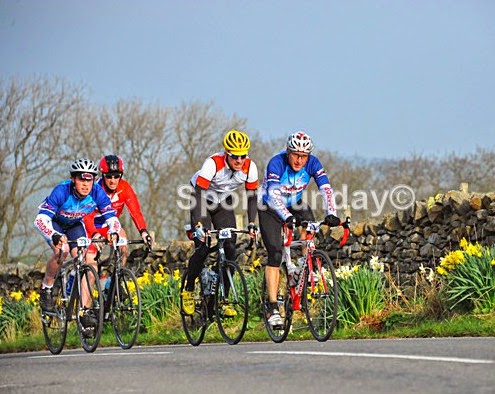 Go to  www.sportsunday.co.uk for photos from the event.

What a difference from last year when event was postponed due to snow and then run later in mist and heavy rain. This year with the temperature up and the prospect of sunshine the shorts were out for Chris Smith who joined myself and John Doherty. (Peter had sent his apologies due to a fight with the road surface somewhere - of which I hope we hear the full story soon.) I chose knee-lengths and gloves but was soon overheating as John set off like a scalded cat, with Chris struggling to hold a wheel through the twists and turns in the lanes around Kendal towards Kirby Lonsdale.
We got to Barbon with an average speed above 20mph and re-grouped for the climb of Barbondale which uncharacteristically was into a stiff headwind which made a usually fairly easy climb quite a battle. The climb was electronically timed and our time of 20 minutes was about the fastest.
A right turn on the cobbles in Dent takes us up Deepdale where the wind is helpful but as the road steepens John announces he has a puncture so we agree to wait for him at the Ingleton feed - after enjoying a wonderful wind assisted ride down Kingsdale.
After tea and fig rolls we head for Ribblehead into the headwind and sharing the work we pick up a couple of strong blokes to help us and we duly catch another group at Chapel le Dale. At this point 'white van man' performs a foolish overtaking manoevre attempting to turn left across us into the pub. The ensuing chaos sees Chris split off behind John and me and not aware of this we weren't to see him again till the finish.
Our legs started complaining on the fast run down Dentdale and then after Sedburgh it gets really painfull on the lanes around the Howgill Fells - but at least I could see the beauty of the fells this year.
We were back to Staveley in 4 hours 49 mins, for 81 miles, stalwart Chris just 5 mins later and soon reflecting on a grand day out, sat in the sun enjoying a pint from the Hawkshead Brewery and fine fare from the artisan bakery next door. It doesn't get much better.
Posted by Mel at Monday, March 31, 2014 No comments: Links to this post