COPIED FROM CYCLING WEEKLY WEBSITE -
Rapha Condor-JLT notched up a one-two in Saturday’s Border City Wheelers 29-mile event at Dalston in Cumbria.
19-year-old Hugh Carthy led the way with a superb time of 1-07-44, but that was just two seconds quicker than team-mate Richard Handley, while the best of the rest was vet Jon Sturman (Activ Cycles) who was another two and a half minutes back with 1-10-14.
Nigel Haigh (Strategic Lions) was 50 seconds quicker than anyone else in the Manchester and District TTA 10 at Allostock in Cheshire. The 43-year-old clocked 21-38 for the J4/17 course, while 48-year-old Barry Charlton (Swinnerton Cycles) was second with 22-28.
All Terrain Racing rider Zack Williamson flew the flag for the younger riders, the 18-year-old covering the distance in 22-55 to take third and push 50-year-old Paul Robinson into fourth.
Also flying the flag for evergreen riders was Brian Sunter, the 70-year-old member of Condor Road Club who won the Veterans TTA (North Midlands) 18km race at Ranby in North Nottinghamshire.
He clocked 26-23 to record a plus on age standard on 6:09, which was 12 seconds better than Ian Dalton (Cherry Valley RT). Actual fastest non VTTA rider was former British Best All-Rounder Kevin Dawson who clocked 23-16


Its only a few days since Brian was saying that he was wasting his time racing this year as he felt that he was a spent force; he no longer had the strength and fitness to compete for the win and it was about time he hung up his race wheels.  On Saturday he showed us once again the transformation which occurs once a number is pinned on his back and probably surprised even himself by conquering all before him on age standard in his usual season opener in North Nottinghamshire.

On Sunday Nigel, Lumby, Damian and myself had a potter over to Whalley to witness Padiham Chris in full flight in the Circuit of Pendle time trial. Due to roadworks the course had been shortened to 24 miles and it had also started 20 minutes later than scheduled which gave us time for tea and cakes at the event HQ. 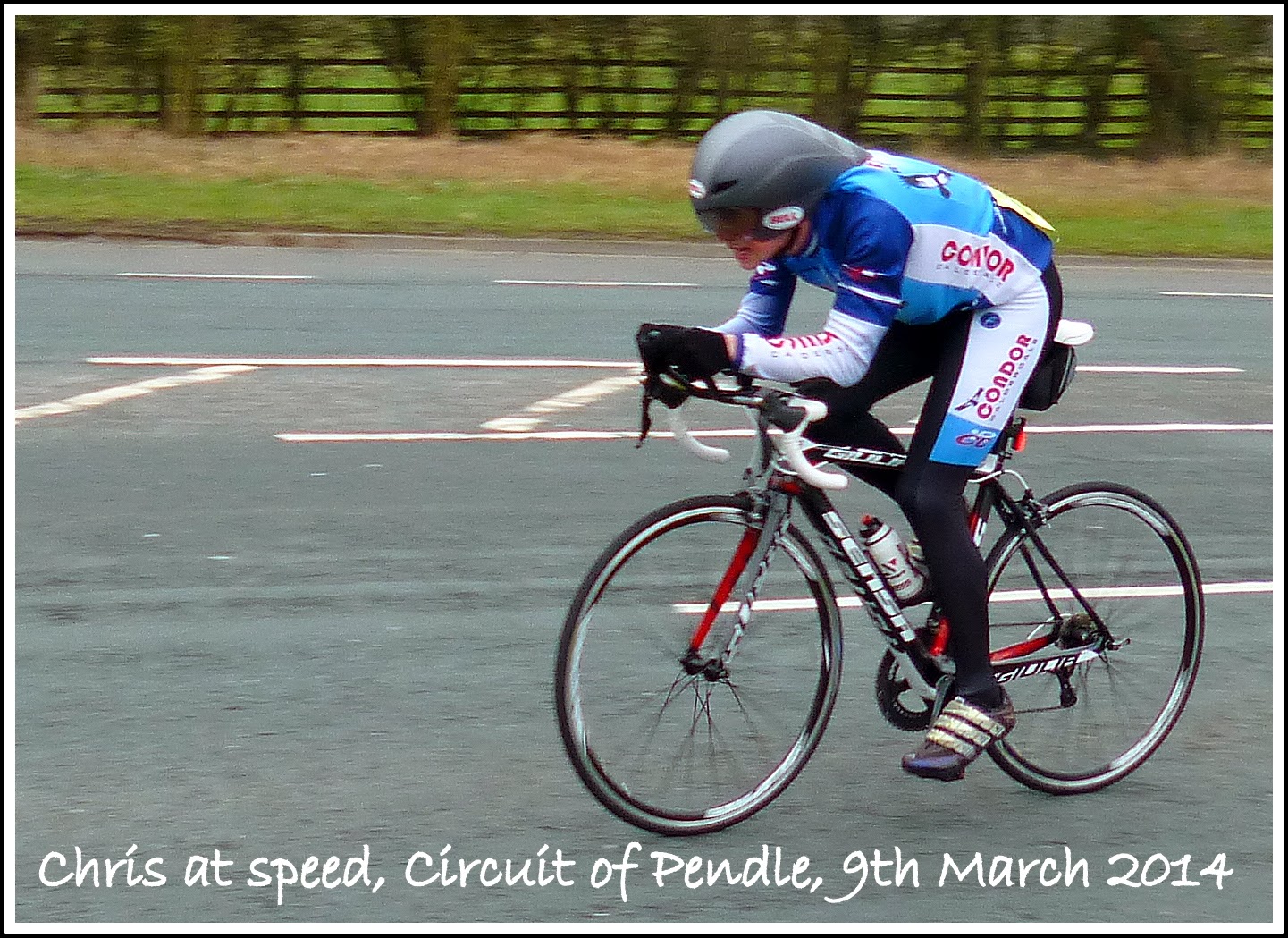 We then positioned ourselves about half a mile from the finish to witness Chris in full flight, how on earth he didn't win going at the speed he was displaying when he flashed past us I will never know but he was without doubt finishing strongly. 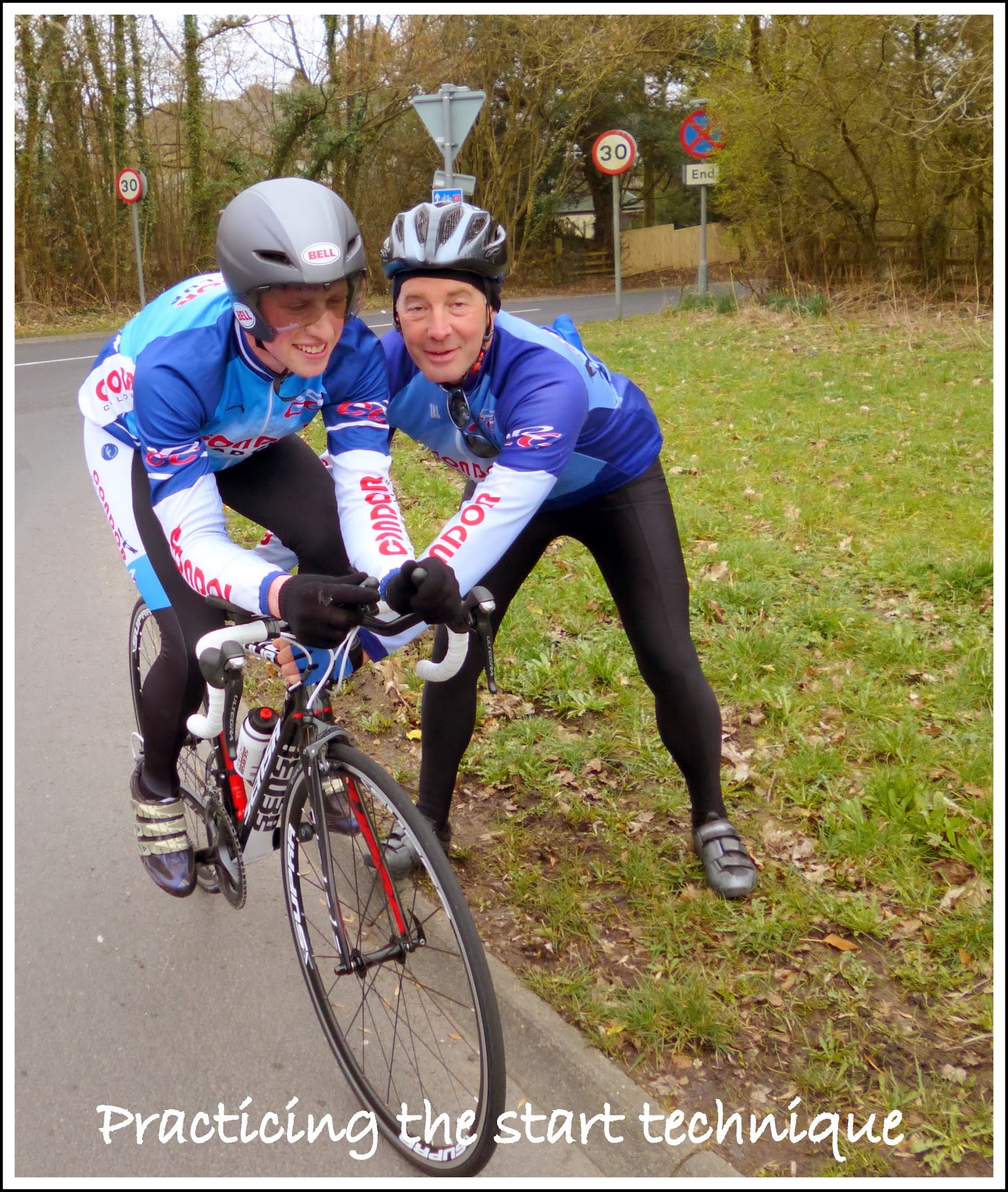 He was still bubbling with enthusiasm after the finish and looked like he could have managed another couple of circuits with ease. Results have not yet been made available on-line but I do know that Chris recorded a time of 64 minutes and will be blogging his own report and first observations on the world of British time trialing later in the week.

Once our spectating was over we headed back to gods own county via Pendleton, Worston and Downham,
taking a lunch break at the cafe at Barley (Downham cafe is no more). From Roughlee we picked up the Seasons of Mists route over to sunny Yorkshire where the temperature rose from 10 to 16 degrees.

No mechanical's even for me this week and home mid afternoon, hope its helped Nigel get over last Sundays ride and perhaps one day he and Ian may feel able to face Derbyshire once again.
Posted by petehorne at Sunday, March 09, 2014 No comments:

Following the example of Paul Daly I thought that you might like a picture of a migrating Condor temporarily over in California and having a quick ride after work with the ocean in the background. They have a dedicated bike path for miles along the coast - parallel to and separate from the main road. Its a tough life. 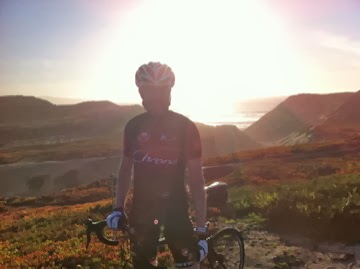