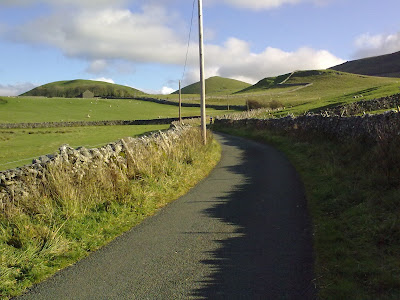 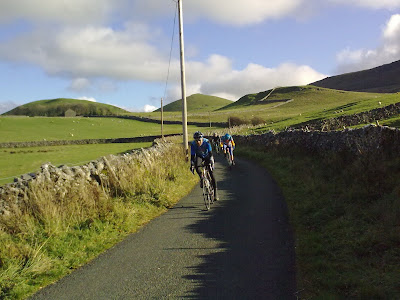 once an empty byway running from the hidden dales village that shall not be named is suddenly found to be carrying hastening cyclists, dropped by the leading bunch, but still accompanied by the expectation of breakfast barms (or some such northern word) to be had in cracoe's second best sausage emporium ... on the front we have the sly bearded chap, then a clean clad neil for whom the expanding view of fells clad in low winter light is paling in comparison with a permanent close-up of his quill stem, followed by vicar, for whom the ride - that is the ride after his assault on the gathering of meat and egg that no mere barm, no matter how indigenously capacious, could ever contain - was to become a mere bagatelle, a whimsy, so easy was the post repast pace ... indeed there was no sport to be had for any of us, bedevilled as we all became with a deeply unspiritual group mentality in which the above was the only really break, a shining shaft of individual light breaking the weighty underbelly of a slow-moving cloud of common denominator togetherness and solidarity
Posted by robin at Monday, November 08, 2010 No comments: Links to this post