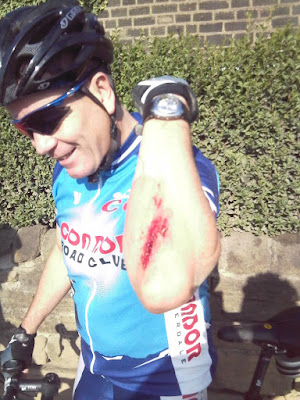 Health Warning ! The Saturday morning cafe run can damage your health (especially when you pass the time waiting for your team mates outside the Flappit by attempting to do track stands). This is what happened to Trudders last Saturday.
Bravo to Robin for his Northern Dales report.
This Sunday the 20th I've entered the Autumn in the Peak audax, a 118 km tour of the White Peak, starting from Bamford (just the other side of Ladybower) at 9am. Looks like a good route initially taking a westerly route through Sheldon & Monyash, round the back of the Roaches and back over Elton & Youlgrave. Some breakfast is available before the start and refreshments at the finish. Brian is down as a probable for the ride (as long as he has recovered from the YRC 50 on Sat afternoon). I hope to see some more Condors there - its a decent weather forcast and it will be good training for the Season of Mists.
Posted by petehorne at Friday, September 18, 2009 No comments:

Seeing as no-one has yet admitted to our completing yet another audax and so becoming dangerously familiar with said events, I am taking it upon myself to go declare publicly that Sunday 6th September witnessed a number of Condor riders, not even in disguise, and aided by Mick Collins and friends, gathering for one such event somewhere starting with Arn ... could be side, and not cliff, which even I know is in the Dales (isn't it?) and heading east for ages under the lee of Ingleborough, beyond Ribblehead and out beyond places with which I was only vaguely familiar and where lo it seems the Dales actually do stop and a kind of tourist arable-ism takes over. Luckily we turned about and headed to cafe for a big fry up at a cafe in a village that 'the condor' likes because its got a right good hotel fronted by a traditional green which, for our visit, was bedecked by a kind of vicious monochrome bunting of motorbikes heaving to and fro, slowly, under the immense weight of their leisure-fattened riders. Onto Tan Hill where in Condor style we split up. Surprised it took so long really. By the top Mick and mates been left to fend for themselves as we all pottered on under the able direction of the master of pottering on, who on this and, I gather, on all recent rides was ably assisted by a computer on his handlebars which looked like a mini shoe box and probably had a function for calculating the power-weight ratios of a size 7 on the end of an inside leg of 34 inches or some such ... anyhow it told us all the way admirably and meant the irksome map reading/navigational element of the audax was dispensed with, leaving 'the condor' to bray on uninterrupted. We ended having to cope with a head wind which called for a reluctant and limited co-operation from the remaining six of us, though when Pete mentioned we had 25 left, Brian instinctually hit a long turn at the front meaning the rest of us could begin quiet conversation, it was almost sociable. A worrying trend toward friendly riding confirmed when rather than leaving the finish with only a brief pause to get our time, we hung about long enough to have a coffee and for Pete to steal some strudel from an unsuspecting youth hostel cook ... you can take the man out of the force, but the force always lingers in the man heh?

Posted by Ian Robinson at Friday, September 18, 2009 No comments: