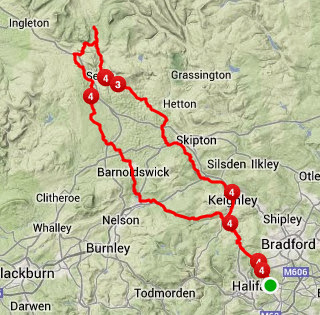 Superb weather and a great route for today's club run up to Horton in Ribbledale where we spent an hour or so shouting encouragement at the hero's competing in the 3 Peaks Cyclo X.
I was rightly worried when I got to Denholmegate at 8.30 to see that only fast men, Dom Turner and John Doherty were waiting for the start. My fears were confirmed when a few minutes later going up through Denholme village I was struggling off the back. We met Mel and Richard at Crossroads and, as published made our way up to Feizor Cafe via Oakworth and the Herders. On the descent to Laneshaw Bridge we collected Ian and Steve Barker. As everyone who knows them will understand the riding was tough when Mel and John were together on the front, the tail wind just making the pace faster rather than easier. Fortunately they missed the left turn for Fanny Greys in Foulridge and Ian and myself were able to take over the (steadier) pace-making through Ba'lick, Horton and Paythorne.
Steve and Ian left us at Settle and we made our way to Elaine's Tearooms on the back road through Lawkland, missing the delights of Bukk'a Brow.  As ever we were treated to a first class feast at Feizor, bacon, sausage and egg butties second to non before taking the Pennine Bridleway over to Helwith Bridge. We went up to Horton and in company with Steve Cavell who had walked over the summit of Pen y Ghent watched the leaders, led, for the 10th time by Jebby, then returned to Helwith Bridge Hotel  where the hard men drank beer whilst the more mature members of the peloton, Richard and I, opted for the drink that cheers but does not intoxicate, 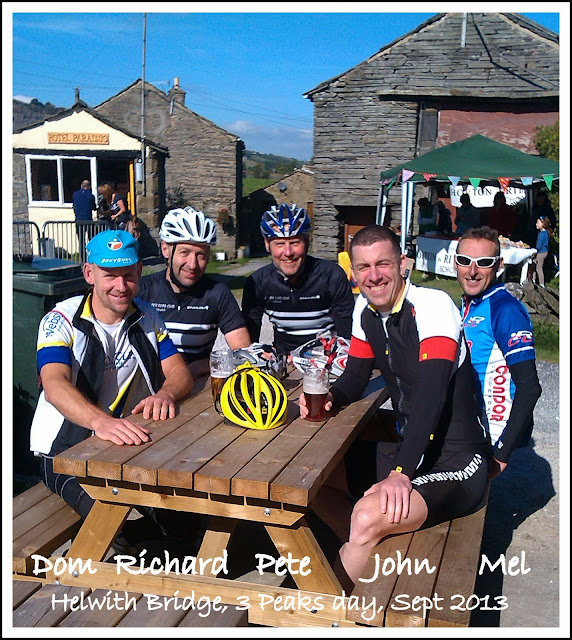 Once we were confident that the boozers were settling in for the duration Richard and I sneaked away, having a pleasant ride ride home at a more sedate pace. Although there was a fairly stiff head wind we chose the scenic (hilly) route over Attermire rather than the busier valley roads, arriving home in time to witness not one of the Brits finishing in the Worlds - just like the good old days.

Well done to Condor's Adrian Lord who finished the Peaks for the 3rd time with a time of 5.18.14, beating his partner Nerys by just over 20 mins but commiserations to their daughter Madeleine who, riding under the Todmorden Harriers banner retired at Cold Cotes.


Mel30 September 2013 10:23
We've seen the 3 Peaks race in all weathers but yesterday must have been the best.
Yes, it was down to me to uphold the Condor reputation and take ale whilst the 'lightweight' members headed home. Three pints of the local Penyghent brew later Dom and I were watching Dwarty dance away from us up Attermire climb ! On the back road from Carleton (the scene of much 'dying') Dom paid for his efforts (and for drinking crappy lager) and blew big style. I understand at Ingrow he begged Dwarty to leave him and crept home alone - hopefully before it got dark !
Posted by petehorne at Sunday, September 29, 2013 1 comment: Links to this post