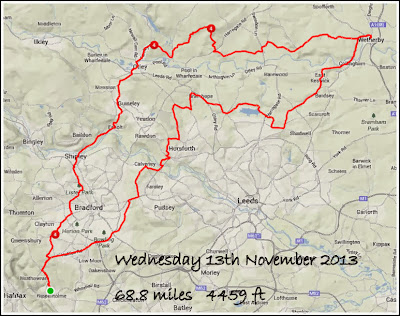 Another good turnout, 18 up at Shelf Roundabout at 10 o'clock, it was looking black up north and there was general agreement when Grimpy suggested going east to the cafe at Knaresborough for lunch. Unfortunately he took it upon himself to lead the ride and we ended up at Wetherby instead - never mind, the Asda cafe copes swiftly and efficiently when called upon to feed masses of hungry cyclists.
The downside was that our return route was on the same roads as the Condor Club-run only a few days earlier so when we got to Castley Lane, instead of turning left to follow the easy route to Pool in Wharfedale  we, or I should say, most of us, chose the more scenic route to Otley over Almscliffe Cragg and on the mucky single track road down to Leathley. Several Stangers, Everard, Pete G, Mike and Lumby chose to miss this little diversion and will forever be poorer.
We had a nice little 20 minute break on the way up to Farnley when Kev illustrated the massive power he carries in those big legs by breaking his chain (can't blame a worn-out chain as its only done about a hundred miles in the year since he bought it). I wasn't convinced it would work when our resident mechanic fitted a Campag link to the Shimano chain but it did and we were soon on the road again - and it was still daylight. 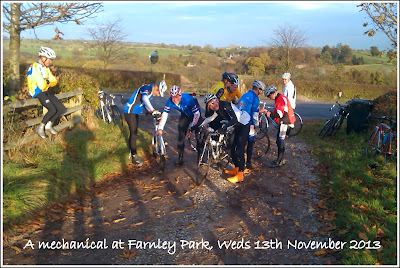 We split up at Shipley with a trio of Pauls (PD, PG & PP) and a triad of Johns (JG, JK & JH) together with Queensbury Martin, their appetites for steep hills still not satisfied, turned right towards Saltaire for the Northcliffe Golf Club climb and on to Egypt and the Walls of Jericho. My excuse for missing this pleasure was an appointment at home at 5 o'clock but I'm not sure if my companions on the softies route (KB, Phil Haigh and Neil King) had any excuse.

Posted by petehorne at Wednesday, November 13, 2013 No comments: Links to this post