I'm not around this weekend but I thought I'd mention that we have 2 or 3 riders taking part in the Bronte Sportive tomorrow. Looks like a great route and I'm led to believe that no one as yet has ever achieved the Gold Standard. You can enter on the day, at the start at Leeds Uni. Annex (close to the railway station) in Keighley before 8.30.

Next Saturday the touring section (thats me and Chris so far) are having an away day with a Tour of the North York Moors, we're intending meeting at the top of Sutton Bank at 8.30am for a circuit including Blakey Bank, Rosedale Chimney and White Horse Bank to finish with a cup of tea at the Gliding Club cafe.
Here's a write up from Simon Warren - 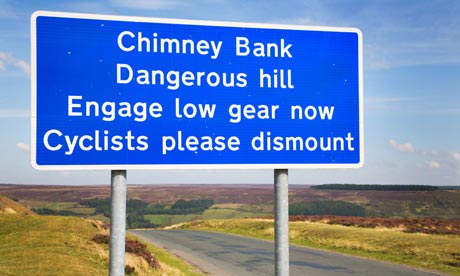 Few climbs have such a fearsome reputation as Rosedale Chimney, and rightly so. I snapped my chain not once but twice in my attempt to conquer this vicious stretch of tarmac. Leaving Rosedale Abbey, a sign warns you of the one-in-three – yes, one-in-three – gradient to come. This climb isn't for the faint-hearted. The surface is rough at first and steep from the outset, but improves as you pass over a cattlegrid and approach the double hairpin. The second bend here is so steep on the inside that it forces you far right, so take care. Now straightening up, the next stretch is ridiculously hard, the main problem here being just staying upright while either side of the road, sheep wait to see if yet another rider falls victim to the Chimney. Stick with it, as eventually the one-in-three does turn into a relatively gentle one-in-six, allowing you to build a little momentum to drag your bike up on to the moor.
Where From the bottom left corner of Rosedale Abbey leave the main road and turn south east on to Gill Lane, pass the giant warning sign, and head up. Grid Ref: SE 720 945 (OS94)
Length 1430m
Height gain 179m
Approx climb time 9 mins
Posted by petehorne at Saturday, July 19, 2014 No comments: Links to this post