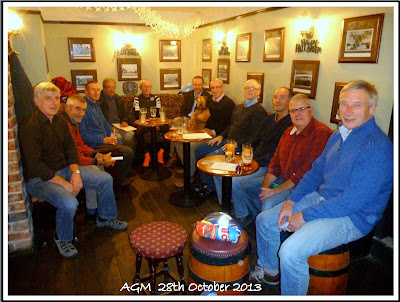 Annual Dinner and Prize Presentation  Paul Gower confirmed that the annual dinner and prize presentation is once again to be held at the Bailiff Bridge Community Centre, on Saturday 25th January 2014. He confirmed that a DJ would be hired and he is hoping to use same caterers as this year.

Official Reports -
Secretary - Nothing to report
Treasurer - Paul Gower distributed balance sheet showing that the club has just over £3000.00 in the bank, similar to last year. Paul reported that he had received 1st claim subs of £6 from 26 members and 3, 2nd claim subs of £4.  Four 2012 members have failed to pay 2013 subs - Robin Holt, Chris Sylge, Graeme Brown and Stewart Harper.
Racing Secretary - not present.
Social Secretary - Dinner in capable hands of Mr Gower.
MTB/Audax/Sportive Secretary - Peter Horne reported that Monday evening MTB rides had been resurrected for the summer months and due to the good weather had been popular with up to 15 riders taking part. The club has supported most local Audax's with 12 riding the recent 'Season of Mists'. Simon Fortune became the 1st Condor to complete this years 1400km London/Edinburgh/London and 'Padiham Chris' Smith completing an astonishing number of Audax's in his first year in the discipline (including 7 x 600's). Members have taken part in sportive's throughout the north of England with Melvin Hartley regularly flying the Condor flag at the sharp end.
Beak - It was agreed that the condorroadclub blog has taken over from the Beak.

Election of Officials - President Ian Robinson proposed that club officials be re-elected en-mass, this proposal was supported with the exception that John Ginley has now taken over as racing Secretary.

Any Other Business - John Ginley reported that a date had not yet been fixed for the 2014 Condor LVRC Road Race but he is planning to organize it on a Saturday in Spring. He is currently looking at a new circuit taking in Scammonden and Buckstones. 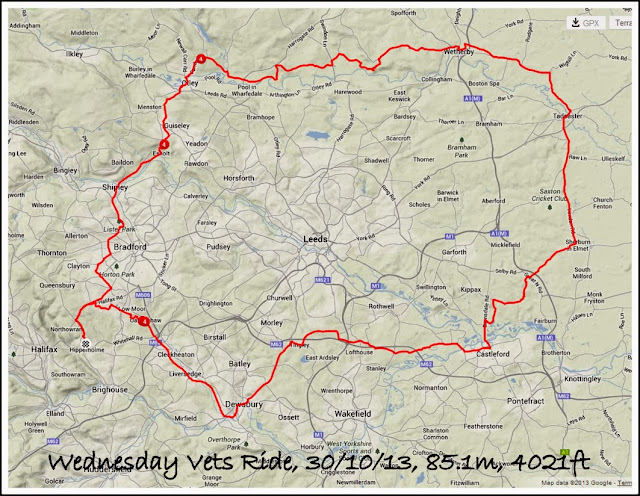 Good weather attracted 16 riders to Shelf Roundabout for todays ride, 85 miles for me so others, not living as near to the start will have had distances up to the mid 90's - new man Garry Traviss couldn't be much short of his first century after he was abandoned on the Greenway when a visit from the man with the hammer caused him to stop for an emergency re-fuel, unfortunately he then got lost.
Posted by petehorne at Wednesday, October 30, 2013 No comments: Links to this post