1 April - Settle and beyond

There will be an "April fools" outing from Denholme Gate at 09:00 for a ride up to Settle via Airton and - if the weather looks good - home over Bowland Knotts.
Posted by Ian Robinson at Friday, March 30, 2007 No comments: Links to this post 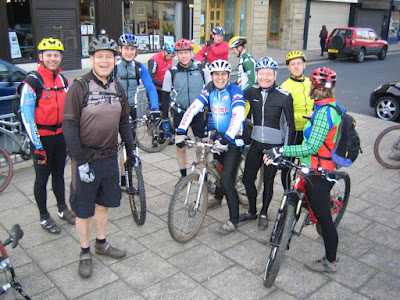 Evening mountain bike runs started last Monday with over 30 riders meeting outside VS Cycles in Brighouse at 1830hrs. We had a good ride in superb conditions going up through Rastrick Woods, down a superb descent, over the railway line and through the fields to Elland. Through Elland Bridge Park, up Gogg Hill, through to West Vale and along the side of Black Brook to Elistones Lane. Then up to Upper Greetland, down through Copley Woods and back to the Red Rooster along the canal towpath. The rides will meet there every Monday at 6.30pm through to when the clocks change back. Although some occasionally stop at the odd pub on the way round the runs always finish at the Rooster where the landlord, Eddie puts on a free supper.

The racing season is several weeks old now with Brian and John once again flying the flag for the Condor. They rode the LVRC Australian Pursuits at Barton-on-Humber last Saturday with Brian taking his first win of the new season easily beating former Huddersfield Star Wheeler, Richard Booth with whom he had formed part of a three man break earlier in the race. Grimpy showed that he's carried over his cyclo-cross form from the winter to take 6th place.

Myself and Nigel flew the Condor colours in the 200k Red Rose Audax on Sunday. We were joined by Damian, former Condor Pete Whiteley, Mick Collins, Steve Robinson (Sowerby Bros) and a few more familiar faces whose names escape me. It was dry and sunny but certainly not the glorious NW Passage weather, with a stiff, cold easterly wind making the home leg of 60 miles from Lantern o'er the Lune cafe at Glasson Docks, hard work. Hard or not it did'nt stop Nigel putting in the lions share of the work an the way home, I was almost feeling sorry for him as he was left on the front into the blustery wind - but I soon got over it. I went through whats become a familiar format, dropped on the climbs, spend miles chasing alone, catch the bunch at the cafe, nip out of the cafe whilst the're waiting for their tea to cool, get caught, sit in till the next climb then get dropped again. It was good to see Clive Williamson at the start, he's rumoured to have made a full recovery now from being run down by a motorist over Cringles a couple of years ago, he's obviously full of confidence and I hope he enjoyed the ride.
Posted by petehorne at Wednesday, March 28, 2007 No comments: Links to this post

It's rumoured that the youngsters are going Youth Hostelling this weekend. The rest are meeting at the Oddfellows Rooms, Coleridge Street, Halifax for The Red Rose 200k Audax. Start time 0800hrs (don't forget to put your clocks forward).
Posted by petehorne at Friday, March 23, 2007 2 comments: Links to this post

Meet 09:00 Denholme Gate with your winter kit on prepared for snow! Off north & then out west. A route was discussed but just now I can't for the life of me remember anything about it. Clearly I should listen more (or drink less) on a Wednesday in the pub. But Deuchars IPA is such a good ale...

Club meeting on next Wednesday 21 March 21:00 in the Puzzle Inn, Sowerby Bridge.
Posted by Ian Robinson at Saturday, March 17, 2007 No comments: Links to this post

11 March - out west toward Slaidburn

Meet 09:00 at Luddenden Foot for a run out west toward Slaidburn. The riverside cafe does great bacon and egg sandwiches, or can we only go there when it is sunny enough to sit outside?
Posted by Ian Robinson at Saturday, March 10, 2007 No comments: Links to this post

RARE PHOTO OF GRIMPY LEARNING TO RIDE HIS FIRST BIKE

We meet Denholmegate 0900hrs for the Blubberhouses route in reverse - Barden via Cringles or Eastby Brow, Stump X Caverns, Greenhow, Duck Street, I suggest instead of dropping down to Blubberhouses we turn left and go to Otley via Fewston & Norwood Edge. Cafe stop either at Stump X Caverns cafe or at Otley. 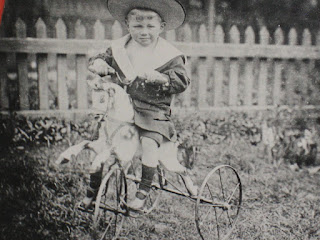 Posted by petehorne at Friday, March 02, 2007 No comments: Links to this post