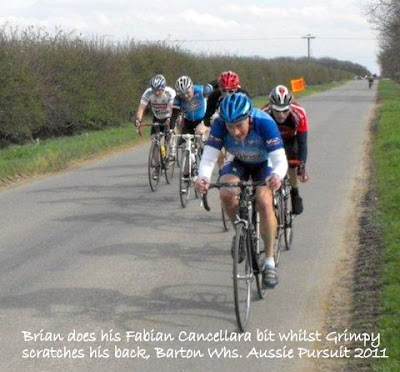 Ian was wondering where some of the regulars were last Sunday so I thought I would update the blog with the result of my investigations. Enquiries have revealed that Brian, Grimpy & Pete Smith had opted for the easy option, instead of going on the club run they rode the Lindale Road Race at Grange-over-Sands. All three were in the over 60's race (Pete making his debut in the 'E' category - belated birthday greetings). I understand that they were caught and passed by the young vets but Brian and a few more over 60's re-caught the youngsters with Brian taking =1st in his category. When I spoke to Grimpy he didn't know his actual finishing position but he finished in the same bunch and just behind Pete who I'm told was working hard and had made several attempts to bridge the gap to Brian. I understand that Sean Smith won the 'B' age group in the same event. I was riding an Audax down in the Peak District but the less said about that the better.

The previous weekend our road racing trio had ridden the Barton Wheelers Australian Pursuit, an event that Brian won in 2010 but he was unable to duplicate the win this year. He tells me that he had more or less blown by the finish after he and eventual winner Rob Stones had spent the event working very hard to avoid the younger riders catching them. Brian took 7th, Grimpy 8th, I haven't seen Pete so I can't report on how he felt on his first race for several decades, however I did hear a rather humorous anecdote about how he was looking round for the bike checker before the start. 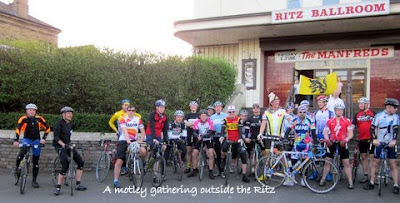 There was a good turnout of 28 for the Ronde van Calderdale last Wednesday evening including 4 Condors, Steve Cavell, Ian Wellock, Robin & myself. Pedalsport's Jack Clarkson took the mountains jersey with a fine ascent of Trooper Lane but he was outwitted in the final sprint into Elland by Mick Collins.

Posted by petehorne at Wednesday, April 13, 2011 No comments: Links to this post