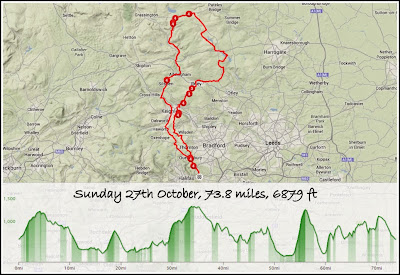 Not the best attended Condor Sunday ride but a good day out anyway.  I met Damien at Denholmgate and we hung around enjoying the sunshine until it became apparent that no one else was coming. However Mel, Oakworth Steve and, fresh from his starring role on Look North, Padiham Chris were waiting at the roundabout at Keighley.  We headed further east than in previous weeks intent on enjoying the autumn colours and were joined by half a dozen or so assorted Aire Valley and JD's riders.  Good legs had deserted me today and I was found wanting over Cringles and was lucky to have the company of Steve, on the comeback trail after being off the bike some time following a MTB crash whilst on holiday abroad.  We were re-united with our team mates at Addingham and made our way to Stump Cross Caverns cafe via Cavendish Pavilion, Strid Woods and Skyreholme.
A tail wind blew us up to the cafe in double quick time and by just turned 11o'clock we were enjoying better than I had expected b & e butties.  Once refreshed we rode on to Greenhow and turned right into a strong cross wind down Duck Street before dropping down into the shelter of the Washburn Valley and West End. From Blubberhouses, instead of crossing the busy A59 and onto the Otley Road we turned left, staying on the Harrogate road for less than a mile before turning right onto the little single track road down to Fewston.
As always the Washburn Valley was putting on a magnificent autumn display and it was a delight to potter up through Timble, around Low Snowden and over to Askwith.
At Askwith, being only a couple of miles from home, it must have been very tempting for Mel to say goodbye but, I'm not sure if it was the lure of Keighley Gate into a head wind, or the fact that I'd suggested we sample the Old Spot ale at Cullingworth, but he resisted the temptation to be lazy and before long he was battling with the Flying Farrier on the gravel of Rombalds Moor. Steve was feeling the miles by now and encouraged us to abandon him over the moor.
Anxious to take the most direct line once over the track Mel suggested the cobbles of  Thwaites Brow from Riddlesden, an inspired choice, I'd never been up that road before, if there's anyone else out there who's missed this pleasure you must add it on your things to do list. 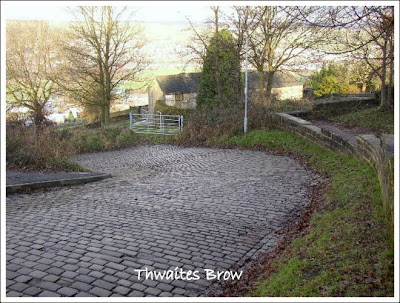 Another stiff climb soon followed over past the Guide Inn then it was all freewheeling down to The George, a 1st class establishment, the Old Spot excelling itself and the locals friendly.
Once refreshed we said our goodbyes to Mel, Chris, Damien and myself heading for home via the Great Northern Trail.
The map at the beginning suggests 70 odd miles; you can add another 30 or 40 on to that for Chris; when I left him at Queensbury he had another 30 miles of head wind in front of him - he assured me he would enjoy it.
Posted by petehorne at Monday, October 28, 2013 No comments: