Quantocks, Quarks and quite a lot of cycling... 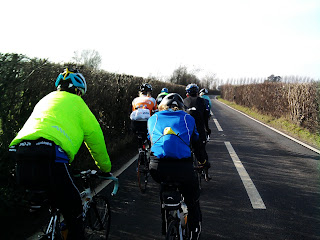 Hello all,
Time for another update from the other side of the Pennines....
I've now started track racing with the Monday night ACT league, did my first night last week. I was encouraged by a good performance in the Devil takes the hindmost and the scratch race. I'll keep you all posted on how that's going!
Before Christmas we had a few days out in the lakes. I've now tackled Wrynose and Hardknotts (admittedly not in sequence at the end of a 130 mile sportive..).
We started our January training in earnest with 3 days in Bristol. Some amazing riding in the Quantock hills and Exmoor with some silly racing around thrown in for good measure. We're doing regular chain gangs with the Manchester Wheelers 2/3 times a week which makes for a good mid week leg-breaker.
I've built myself a fixed-wheel commute out of some old bits I had knocking around and some bargains off eBay (Thanks to Dave Grant for the retro Campagnolo cranks!). Might pop some pictures up at some point. Hasn't fallen to pieces yet...
The Easter break is coming up in about a month or so. I'm looking forward to some riding with the "flock" to get a break from the Physics and murderous bus drivers!
Johnny
Posted by Johnny_Perry at Saturday, February 20, 2010 1 comment: Links to this post