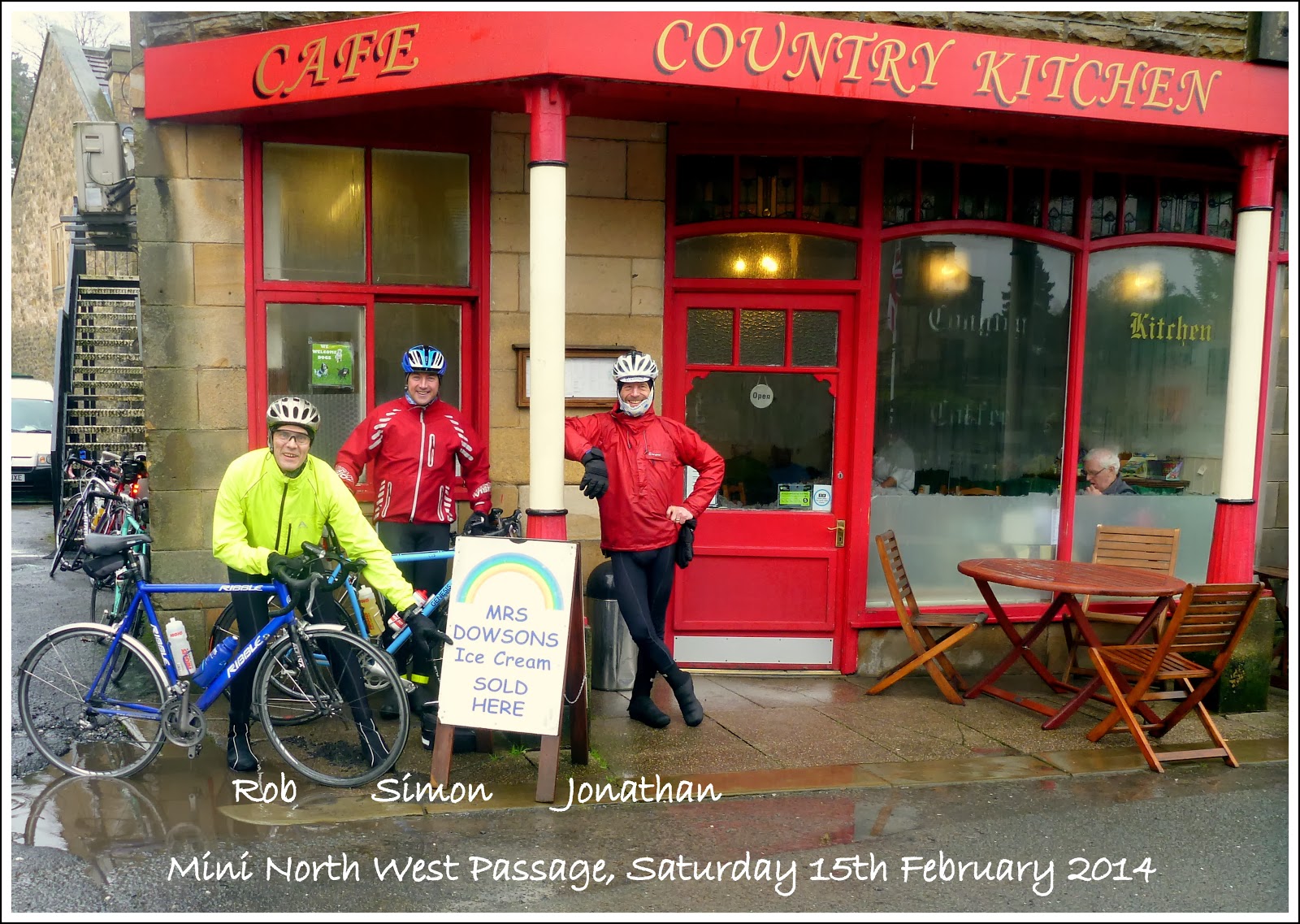 Must have been something good on daytime television this Saturday as there were many DNS's at the North West Passage. I admit that weather did look pretty grim as my brother-in-law, Rob, and I drove over Blackstone Edge into the driving sleet towards the start. Rob was visiting for a few days from his home in Scotland and had had the good sense to resist my suggestion that we should ride the 200k event but did agree to ride the Mini NWP, at a mere 75 miles.

As we drove west from Littleborough towards Rochdale I was quite impressed, considering the weather, at the number of riders being blown eastwards along the A58, almost 50 starters. Rather illogically considering the weather conditions, there were only twenty odd riders for the shorter event, I was pleased to see that Simon and Cragg Vale's  Jonathan Emberton were there and we soon formed a disciplined quartet at the head of the field.

A lot more west in the wind than had been forecast gave us plenty of variety, tail wind to Tod, head wind up the valley over Cornholme, tail wind over the Greystone climb then a head wind through Bolton-by-Bowland and on to the Waddington check.

The cafe was unusually quiet, we loitered there for an hour or so sitting on chairs that the staff had quickly  bin-bagged upon first having sight of us. After a leisurely lunch and tea drinking session the cheerful staff armed themselves with mops ready for our departure .

It took a while for the cafe legs to get going again with Simon and Rob beginning to pay for a lack of winter miles but their prayers were answered when we picked up helping breezes over Oswaldtwistle Moors and Old Betts.

Rochdale was looking as good as ever on the long fast descent from Owd Betts and although we spent what seemed like about half an hour at red traffic lights through the middle of town we were back at the Spring Inn 20 minutes before we were due (due to the lower max. average speed requirement on the Mini).

Well done to Mel, Chris and the VS lads, only 10 or 15 minutes slower for the 209k than what would have been likely in good weather.
Posted by petehorne at Monday, February 17, 2014 No comments:

As Saturdays grim weather was no surprise we were able to dress accordingly with robust wet weather gear. The local grupetto of only 6 contained the V.S. trio of Dwarty, Binman Chris & Eric as well as Padiham Chris and Dave Leckenby who I had travelled out with.
A helpful tail wind to Blacko helped soften the conditions but as we tacked around into the cross headwind on the climb Binman Chris sensed my desire to push-on and he made the move, with the 6 of us now making up the front group.
We didn't hang around in Settle and, trying to retain as much body heat as possible, we fumbled with Audax cards not even taking our gloves off. Taking turns at the front we battled the A65 in the cross headwind. The advantage of tri-bars was well demonstrated by Dave Lec with an instant 10% upping of the speed when he hit the front. I had to protest when the only available shelter for me was on the white line at the back of the resulting echelon.
As tradition dictates we enjoyed a very welcome hot sandwich and brew at Kirby Lonsdale and with the rain almost stopped I rewarded myself the luxury of a dry pair of gloves. Bob from VC167 tagged onto us as we left for a stiff slog down the Lune Valley but after Lancaster the wind was starting to nudge at our backs.
A quick re-fuel at Scorton and we were back to the 6 of us again and on the lumpy road to Longridge the tail wind saw Binman and Eric setting a good pace that had several legs complaining.
Meeting a red light at almost all the junctions around Blackburn allowed us a welcome breather before Haslingden Moor and we were all together for the inevitable 'kicking-off' on Owd Betts with Eric taking the KOM prize. Three of us descended to Rochdale with Eric and Binman dissapointed that my street knowledge couldn't lead them back to the Spring Inn first - but with the new tram system all the roads have changed again and after negotiating a few back streets we found the right road and were joined at a junction by Dwarty and Dave who had come around the ring road.
It was the usual finish around 4 o'clock with Padiham Chris just behind after being out-pedalled on the descent of Owd Betts prompting advice on turbo training or chain gangs to get his legs spinning more !
Once we were out of our wet gear and sat in the pub with a pint and pie it didn't seem like such a bad day after all, as someone said - you are more likely to regret the things you don't do than the things you do.
Lets hope for dry roads for the Imps Reliability on Sunday.