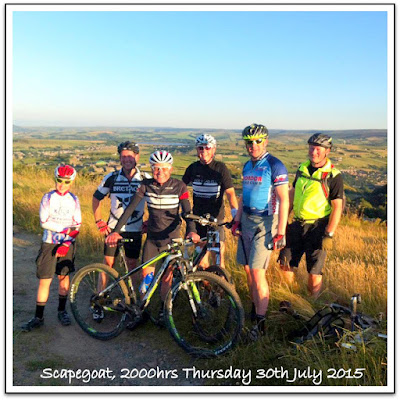 Decent weather forecast for this coming Sunday so Grimpy and myself are meeting at 8am at Callis Bridge (where MT Loop & Pennine Way cross Hebden Bridge to Tod road) for a potter, in a clockwise direction, round the Mary Townley Loop. Its only about 46 miles with about 6000 ft of climbing but don't underestimate it, and bring some food & drink with you as refreshment stops are infrequent. There's been a distinct lack of interest from other parties so far which just goes to show that cyclists can be sensible. 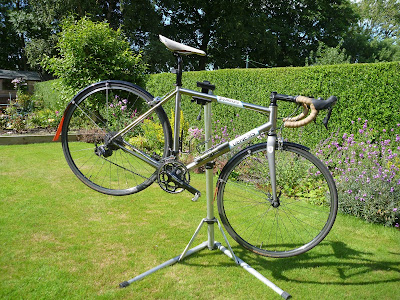 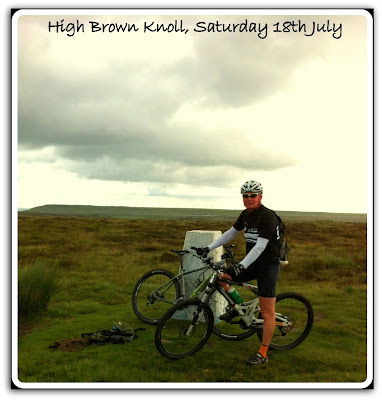 It was a Sunday of 2nd places for our racing men with Brian travelling down to South Wales for the Vets National 25 Champs, his time of 56min 11secs giving him a plus 18min58secs faster than his age standard and earning the silver medal behind Deeside Thistle's Derek Stuart.

Grimpy travelled down to Braintree for round 3 of the LVRC Percy Stallard National Road Racing Series taking 2nd place in his age group behind Bill Cotton and ahead of former pro Tony Woodcock. Thankfully the services of the Red Cross were not needed this week as they were the previous Sunday when he rode the Vets National Mountain MTB Champs on the 2012 Olympic course in London (fell off on a drop-off). Despite the fall he finished 3rd in his age group and 7th in the over 60's category. 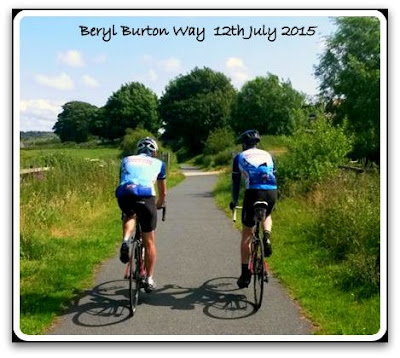 Meanwhile Chris stayed nearer home riding the Team Swift 100 mile Time Trial on a course in east Yorkshire coming 2nd by a mere 4½ minutes to Carlos Riise of the Shetland Wheelers (yes he'd travelled all the way from the Shetland Islands to deprive Chris of the 1st place cheque). A great result for Chris who recorded a time of 4hrs 6min 15secs on a cold and windy morning.

The mountain bike rides are still meeting at 6.30pm Thurs eves in Brighouse and this Sunday Grimpy and I are planning an assault on the Mary Townley Loop, meeting 8am at Callis Bottom, Hebden Bridge (if the weather doesn't improve its likely we'll cut it short).
Posted by petehorne at Tuesday, July 28, 2015 No comments: Links to this post

For anyone who is not keen on the Bronte Sportive then we can offer you an alternative - 9am at Hebden Bridge for Waddington. 'Go West, young man, and grow with the country'.
Posted by Ian Robinson at Saturday, July 18, 2015 No comments: Links to this post

If anyone fancies a steadier day out than recent weeks I'm planning to take lunch at Knaresborough tomorrow and will be at Shelf roundabout at 8.30am, all welcome.

Next Sunday, the 19th, Oakworth Steve, Mel and me have entered the Bronte Sportive from Keighley, an interesting 88m route. If you're feeling super-fit its your chance to give Mel some pain, if not you can potter round with me. £20 to enter or £25 on the day with all the money going to Manorlands Hospice, go to http://www.sueryder.org/Get-involved/Events/All-events/2015/July/Bronte%20Sportive%202015  for entry and route details.
Posted by petehorne at Saturday, July 11, 2015 No comments: Links to this post

Thanks to everyone from the condor and imps who supported a successful event.
The only problem was an accident on a straight section of tarmac road coming down from buckstones in Race 2 which I understand was caused by a rider switching causing two riders to fall. Both riders (Lee Johnson & Stephen Wilkinson) ended up with gravel rash. Lee Johnson had significant lacerations; St Johns ambulance support vehicle attended and whilst they concluded that no breakages had occurred, requested ambulance support. We hope Lee recovers soon and is able to compete again in 2015.The paradox was on the rough road and off road sections no incidents were reported. The feedback from the racers was all positive. Yes its true
Anyway to prove a point I received an Email from mike twelves ( ex Pro) winner of race 2
Thanks to you and your collegues for an excellent race today, John. A great, imaginative course and really well marshalled and organized
Also an email from Karl Smith in race 1
Hi John,
Must thank you and all the helpers for running such a fantastic event today.
You would not believe how many riders said how much they enjoyed the course and race today.

Its been a busy weekend for the Condor. Steve, Mel and I had a full and enjoyable day yesterday taking part in the Dales Grimpeur, a route which makes the Dales Etape and the Fred seem like a walk in the park. Unknown to us at the time Heptonstalls Graeme Brown and his better half, Kate also rode but had been delayed getting there due to the thick mist, a champion effort on a route many a hardened cyclist is afraid of, by a couple who are probably better known as runners.

Whilst we were following a less pressured activity our racing men were putting themselves through it in the YCF 50 on a course based on the A19 around Thirsk. Despite it not being regarded as an evening for fast times due to the windy conditions, Brian ignored the weather and set a new British Age Record for the distance recording a time of 1.57.21 which gave him 6th place overall, an incredible achievement in open age competition. One place behind Brian in the overall standings, riding his first ever 50 was 'Padiham' Chris with a time of 1.57.56, a time and position anyone would be proud of.

Chris has had a busy week. On Tuesday evening he knocked 30 secs off his PB for the course whilst winning the Rossendale Hilly 10. On Wednesday evening he was feeling so strong and managed to snap his chain, fell heavily and injured his knee. Thursday evening he rode the Rossendale Whalley/Settle 21m TT, again taking 1st place. With the 50 on Saturday evening most would have considered that to be enough for one week but to the amazement of all he was due to face the timekeeper once again, at 8 o'clock on Sunday morning down in Cheshire for his debut 100 mile TT. Defying logic he recorded a great time on the sporting course of 4hrs 15min 22secs. Results are not yet available but when he left to come home he was topping the leader board.

Most of our members have been busy today helping at the Condor Road Race. I had to leave before the traditional de-brief at Greetland Community Centre but I'm sure Grimpy will update the blog with full details.
Posted by petehorne at Sunday, July 05, 2015 No comments: Links to this post