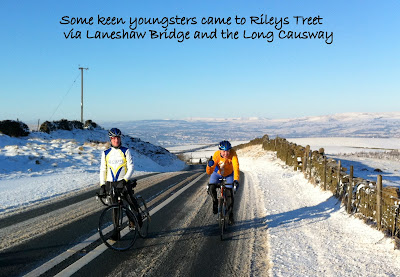 Neil says he was rather cold on Sunday but he's probably just been spending too long at home sat in front of the fire. Judging from the above photo taken by Irish John on his i-phone of Chris & Neil on the Long Causeway it was a glorious day. Shame most of us missed the joys of riding round the East Lancashire mill towns on black ice and elected to go via easier routes to the Robin Hood at Pecket Well for the long established 'Rileys Treat'. 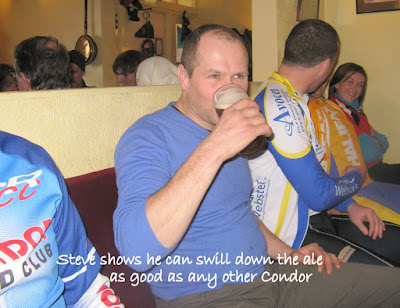 After a 10 out of 10 breakfast at Steve's wife's establishment, Towngate Tearooms, in Heptonstall we sprinted up to Pecket Well. Buses, trains and walking boots had been the preferred choice of transport for the majority of revellers with Kev Shand being the only Rochdale lad seen to have arrived on a bike. 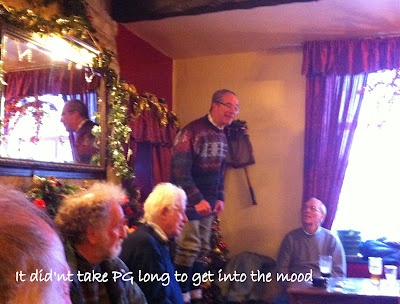 Quite a lot of Paul's had walked up from Luddenden Foot and having stopped for, as one of the Paul's put it, 'a gargle', at the Lane Ends en-route they were soon dancing on the tables and forgetting their lines (no names mentioned - see above pic.). 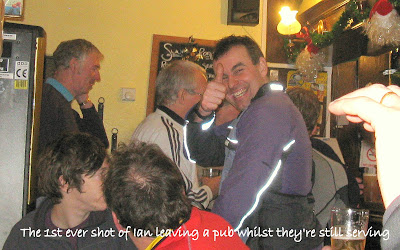 It was good to see Ian Wellock so far away from the Red Rooster - surprisingly he left early - probably to go to the Rooster.

Remember the serious stuff starts with the Kettlewell run, Sunday the 9th of January, 9am Denholmgate, 9.30 Keighley roundabout.
There's a very much less serious run on New Years Day from Brighouse, 10am outside the old VS shop for breakfast at Holmfirth and on to The Works at Sowerby Bridge via Isle of Skye and Windy Hill. If you're feeling too fragile we should be at the Works 1.30 to 2pm. There's a good chance there will be a not too serious ride on Sunday 2nd of Jan - if anyone has suggestions why not post a blog.

Posted by petehorne at Monday, December 20, 2010 No comments: Links to this post 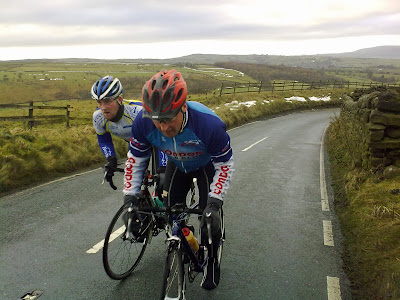 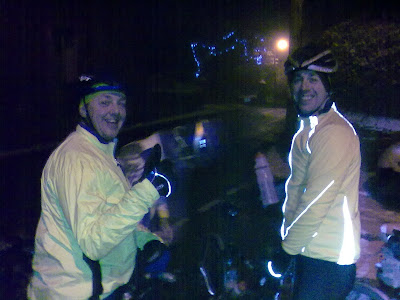 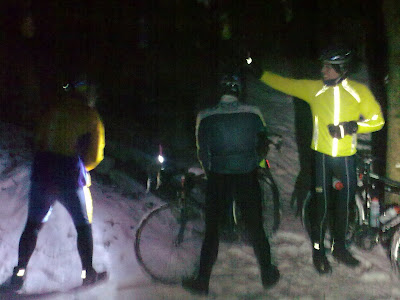 Oh dear oh dear oh dear .... I start by casting back to last week, when we were actually cycling, and Nigel remembered briefly what it was like to be in front (see above), albeit being in front means people might better see the toadstool atop one's head, which is fine provided you concentrate on its being value for money. Even Ian was giving it some welly, and though Steve had not even bothered to Barker himself before calling in on an at home party at Mr Pain's, he stuck with us through the hilly stuff at the end. The call had been made to meet at Hebden Bridge. We duly met, to find John and Chris joining an unlikely gathering of four Condor's. The flock flew low along the valley road at sedate pace, then up and over along the edge of Burnley, Padiham and into the well appointed and well-icy environs of Whalley where another Condor, in fact The Condor, menacing in his lonely perambulations of northern fells, joined up to make for five and so a full set of riding members. The Abbey coffee shop had witnessed mass industrial action, and though the picket lines had been cleared by avenging angels, the staffing remained as solitary as The Condor in his riding. There appeared to be a total of two eggs and some bacon, and some bread at the bottom of the breadbin, and nothing much else, so we divied it up in good Famous Fashion style (save Chris, who somehow managed to get his own order in first). The heating had also gone on strike, so we took back to the bikes to warm up, and ne'r did stop until passing the Silent Inn below Stanbury John and Melvin appeared to have a bi-lateral caesure causing a muscular arrest (too much pointless jousting in December) and an involuntary vocal spasm which sounded enough like 'We're stopping for a pint' for us all to join in, and have three; the fire was warm, the conversation was good, if a little frayed toward the end, when Chris began a panegyric on making the cyclops cry.

... and so we move directly on to this week, we arrive at the Robin Hood and Riley's Treat or Bent Head Do, to find the same characters ensconced, bearing witness to what may well have been a week long uninterrupted speech from Chris on the many ways of spilling seed. Ian, Nigel and son of Nigel has walked oe'r moor, Steve had walked down hill, and only John, Chris and Neil had done the big ride. El Presidento was in his kit, so could have done a turn, and id spotted Pete Horne leaving early so he could just potter on, meaning Condor was not completely unwheeled, but nevertheless we showed poorly. As the early evening drew on people were starting to loose reason. Ian came back with a pie and peas covered in coagulated pan scrapings that actually drew lingering admiration from those having to make do with turkey stock, as though they had missed out in some way. Ian seemed to agree that his plate was positively the best plate of food anyone might wish for, which seen through the fug of so many Landlord's it might possibly have been. Chris seemed to find it easier to get out of his tights by ripping them rather than unzipping (the 'Why get out of them in the first place?' didnt seem a pertinent question). John and Neil seemed intent on promising one another 'a dry one' in the lay by at the end of next years Skipton and back, so bring your cameras for that one. I was trying to justify the use of increasingly long words on the grounds it made me look sophisticated when everyone knows I was just compensating for being witless. Nigel showed a picture of son of Nigel's girlfriend to Chris which was a big mistake. Steve was being very calm actually, counting whiskey. And so it went. Until we left, those walking took to the moor, those cycling unlocked the bikes, de-iced them (see above) and took to Heights Road, and the inevitable crash just outside Midgley when Chris decided he would try and run John into the side of a house, forgetting he was neither as big nor as sober, so came off, snapped the derailleur, scarred his cheek like a war mark and grated all his kit. He was doing about 20 at the time, so bounced quite a way, he seemed to walk OK though, and judging buy the above picture Neil and John seemed quite happy with the performance. Neil and I left with Chris still sitting on the ice doing a chain fix with a paper clip under the capable supervision of John who seemed to be squeezing him with water. I hope they got back alright.
Posted by robin at Monday, December 20, 2010 2 comments: Links to this post