I said SPRING dammit. Rode home tonight into a chill north wind and a sprinkling of rain just for an extra fun topping. Still wearing gloves and full tights!

After last year's fantastic weather I can pretty much guarantee that this Sunday's "S-i-t-D" will be colder and/or wetter. Still, anyone want to join me in a steady-ish potter round? I fear that I may have to let the fast lads go pretty early on and save myself for Cock Hill on the way back.

Here (almost) is a picture of the fast-moving Condor bunch on this ride in 2005. I'm at the back - just hanging on! 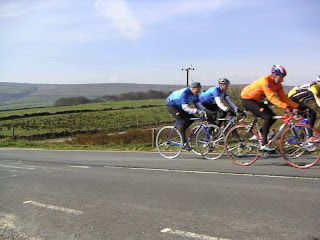 Mind you I could just ride by myself like Vicar did last year poor chap ... http://condorroadclub.blogspot.com/2007/04/spring-has-sprung.html

Ian
Posted by Ian Robinson at Tuesday, April 15, 2008 No comments: Links to this post

Pretty poor showing for the Hebden Bridge and all points West run. I was determined to ride because next weekend is a write off for me (daughter's 21st) and I was encouraged by a text from Ian on Saturday evening that suggestetd that he'd be out in the morning.

It would seem however, that the snow dusting the tops changed Ian's mind - and for that matter Robin's and Steve's - as I was the only rider sheltering in the cinema entrance when Nige rolled up en route to Lancaster to meet his wife and son.

As Nige so sagely said as we pressed on into the drizzel, you don't regret the times you ride but you do regret the times you don't (well something like that) and he was right, the further west we got the dryer it got and the dryer it got the happier we were - to the extent that by the time we entered the red rose county we were able to shed a layer and start to enjoy the day.
Posted by Richard at Tuesday, April 15, 2008 No comments: Links to this post