Tempted by an attractive looking route several Condors are intending to fly round the Mills & Hills Sportive this coming Saturday.   HQ is at Mytholmroyd Community Centre ant it costs £15 to enter (or £20 on the day), entry does include 2 feed stations and meat pies at the finish. Entries are being taken on-line at http://www.mytrievents.co.uk/sportive/mills-hills-sportive/
Its a 75 mile route which starts with a timed climb up Cragg Vale and also includes the following climbs - Ripponden Bank, Stocks Lane, Herders, Widdop, Deerplay, Sharneyford and Cross Stone - the route will be signed.  Start times are between 8 and 9.30am, a few Condors are again intending to meet at Hipperholme Crossroads at 8am to ride out, with the intention of starting about 9ish.  Note that if you were intending to ride the Hebden Bridge Star on Sunday its been cancelled. 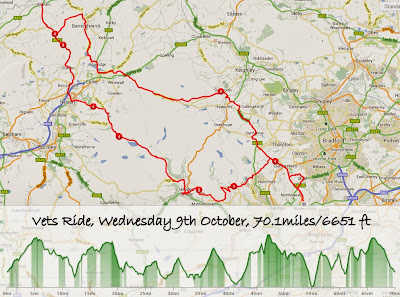 With the bulk of the Wednesday group being away on the autumn tour we were down to 8 for todays ride. With temperatures dropping and a strengthening north west wind forecast we headed over the Herders  and Fanny Greys up to the excellent cafe at Guisburn for lunch. As planned we enjoyed a strong tail wind back over to Barrowford, Nelson and Widdop. Hitting Hebden Bridge early we took a left and shocked Carl by going up through Birchcliffe, Sandy Gate, on Height Road and round Jerusalem before attacking Jowler. Despite telling us numerous times that he is poorly with a chest infection Paul Daly still managed to be first up every hill by a considerable margin with Peeps uncharacteristically struggling following his flu vaccination.
Posted by petehorne at Wednesday, October 09, 2013 No comments: