Hitler loses all of his KOMs on Strava

Melv - thanks for the blog entry. I thought there was a maximum average speed in an Audax? Did you have to wait outside the finish until it was opening time?

Meanwhile, a small group of Nige, Steve Barker & myself pottered round on mountain bikes going all the way to St Ives and back. That's St Ives near Bingley, rather than Cambridgeshire or Cornwall. The wind was pretty kind - on our backs most of the day - and it didn't rain until after we were safely home. The route is great fun with section after section of interesting riding, plus a finish up Stairs Lane just for fun.

There was no time for taking pictures but here is a fine view from a previous ride a couple of weeks back (going up Hey Head Lane climbing from the valley bottom right up to the top of Long Causeway near Duke's Cut). I bet most of that snowdrift is still there. Ian. 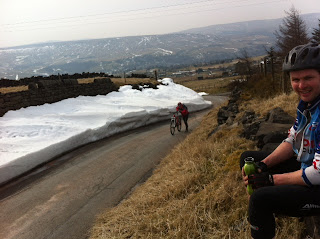 Posted by Ian Robinson at Monday, April 29, 2013 No comments: Links to this post

It was no comfort to learn that most of Yorkshire had stayed dry till later on Sunday, when we had got soaked and cold in the Red Rose County.
The rain was forecast so I chose the winter bike and many of the 47 riders had already donned waterproofs and overshoes when we left the Oddfellows. The depleted Condor presence was just Simon and myself and I was pleased to see V.S.'s  Dwarty and Martin Croft had decided this was a more rewarding day than the 75 mile Brian Robinson Ride. Paul Daly joined us at the start with the offer of helping with the considerable headwind over the Moss to Laneshaw Bridge, which almost required an out of saddle effort on the downhill.
Paul left us at Colne and on the Pendle climbs Simon was wrestling with his single free as myself, the V.S. duo and two lads from Calder Clarion pushed on to Whalley with the rain already appearing.
A re-group at the Abbey checkpoint soon fell apart as Dwarty decided that attack was the best form of defence against the worsening weather. Over the Trough it was just 4 degrees with the strong cold wind cutting through our wet gear.
The sheltered lanes through Dolphinholme and Galgate gave some respite till we were almost brought to a standstill by the fierce wind crossing the estuary to Glasson Dock. The cafe here is always a very welcome break and we re-fuelled hoping for an easier ride home. The Calder duo arrived, eat and promptly departed, as did Simon, without eating, instead choosing to claw back time on his single-free handicap.
The south westerly wind didn't let us off the hook till we turned off the A6 for the lumpy road to Longridge and it was big ring all the way as we caught and left Simon and the Calder duo. After Longridge there was no holding Dwarty and I clung onto his wheel with Martin. He did slip briefly onto the little ring for the top part of the Burnley by-pass.
Back to the Oddfellows before 4 o'clock to the welcome sight of the famous Halifax CTC post-ride spread. (With an outstanding selection of home baking Peter!).


Red rose ride was as usual well organised and despite the lacking number of flocking Condors (Melvin and Myself only) we were in for another treat.  As usual Condor RC headed the group out of control and on through the town centre and out to towards Denholme.  As soon as we hit the first climb, I steadily dropped to the back of the front group where I stayed until the climbs after Colne (kept company by a struggling Bob Johnson always nice to see, and a guy I met on PBP, Jon Rowe).  After controlling quickly at Whalley, Jon and I found ourselves at the front but it was short lived and that would be the last time I’d ride with anyone to the finish in Halifax!

Trough of Bowland was wet and a strong headwind but just about rideable on the single speed.  I controlled at the café in Glasson Dock but decided to make up time by continuing on and not taking advantage of the full breakfast delights.  Irish John, another guy from VS, Melvin and several guys from Calder were all tucking into food.  I managed to hold off the chasing group to just before Longridge when the train of VS/Mel flew past.  The heavens continued to lash it down and surprisingly I felt in good shape to Whalley humming tunes and smiling to myself…..it must have been the effects of the red bull I’d had at control in Longridge.  The final up and over to Tod finishing with the valley tail wind to Halifax, ended a wet but thoroughly enjoyable day out.

I didn’t ride anywhere near as quick as a couple of years ago but I did do it mostly on my own so I was quite pleased with how things are now starting to change round……just need to do a bit more effort and longer runs that we have planned in the calendar.

Pete Horne says -
I ate too much - I knew I would - Thats what the Fat Rascal Ride was all about.  A 7am start from Betty's in York, the group of over 30 who were doing the long ride took advantage of a helping wind to average over 20mph for the 1st 35 miles up to Bettys at Northallerton where we were given breakfast. It was then down to Bettys at Harlow Carr for the genuine thing, Fat Rascals plus tea and coffee, I later regretted not sticking to one Rascal but its difficult to resist when they're sat there winking at you.
After Harlow Carr came the hardest section, into a strengthening wind over to Fewston and Ilkley where we were forced to eat sandwiches, sausage rolls and more Fat Rascals. A tail wind then blew us back to York via a marquee at Wighill that was dispensing tea and refreshments - its a good job we had a tail wind, I was so full I had to sit upright on the bike.
There were some fast lads out and I did suffer a bit with the changes of pace but we persevered long enough for the fast lads to run out of steam and Phil, Andy an myself were the first to finish - 130 miles at 17.6 mph in windy conditions - then 4 pints of the strongest beer they had at the Shed so I'm staying in bed Monday (at least until 6.30pm when I will be at Hipperholme X roads on the mountain bike ride).
Posted by Mel at Monday, April 29, 2013 No comments: Links to this post