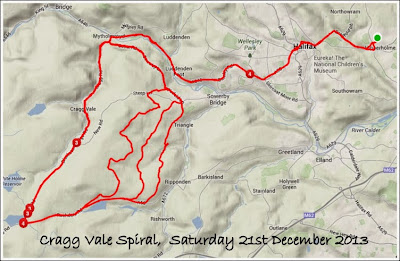 Thanks to Jonathon Emberton for todays Cragg Vale Spiral, its true to say that I would never have considered riding the route had not Jonathon organised this challenge event. When I took the dog out last night it was raining hard and blowing a gale and I was certainly in two minds as to whether to set my alarm but I did and I was glad I did.

Not a bad turn out from the Condor with Steve Thewlis, Chris Smith, Garry Traviss and Old Town Stewart joining me outside the Robin Hood at 9am together with Hoppy from the Imps and VS's Dom Turner plus an array of cyclists, young and not so young on various steeds ranging from road racing machines to mountain bikes.
On the 1st ascent, into a head wind, I was soon in oxygen depth and before the barking dogs junction had lost contact with the front runners who were being towed, inevitably, by our own Padiham Chris. Stewart was going very well for a big lad who doesn't get out much and although Hoppy had been telling me he was feeling really rough, before long they both gapped me. I looked round and was surprised to see we had already lost Garry and Steve. I dug in and re-contacted Stewart and Hoppy and we worked together picking up several remnants discarded from Moto 1. It wasn't easy, the higher up we climbed the stronger the buffeting head wind was.
At the top the leading bunch kindly turned round and came back to us so we could complete the lap together, down past the Beehive and through Mill Bank to Sowerby then back to Mytholmroyd through Boulderclough and down Scout Road. Dom told me that Chris had ridden the whole of the Cragg Vale climb at the front and confided that he had difficulties keeping on his wheel.
The next ascent followed a similar pattern although heavy rain was now added to the strong head wind. The 'tete de la course' was now down to 4, Chris once again driving the pace with Jonathon, Dom and a young lad in a Team Sky top pulling away, and myself and an a guy who lives up at Turkey Lodge working well together at 100 metres (somewhere we had lost Hoppy, Stewart and others - I'm told that Hoppy had to stop to adjust his saddle pack). Chris and the break loitered for us at the summit and we completed this 2nd lap together, through Cottonstones, past The Alma and once again up to Sowerby.
I was hoping that by the 3rd ascent Chris's speed would be tempered but I was soon disappointed, he just didn't slow at all when we hit the climb and I knew I would have to watch the same 4 pull away once again as together with Turkey Lodge we settled in to bit and bit up the longest unbroken climb in the country once again. However the mental effort of the climb was broken by observing Dom up ahead frequently losing contact, digging deep to get back on then drifting off again until he eventually failed  to get back and came back to us. I was very surprised at the summit when I looked round and he was gone. Knowing he's not one to give up easily I got down on the hooks and gave it what I could round on the top road round to Hubberton. I made a navigational error here by going through Boulderclough once again when I should have kept on the high road before dropping down to Scout Road but the now tail wind ensured I didn't lose too much time eventually finishing at the Robin Hood just minutes behind Chris, Jonathan and Team Sky.
I'm really glad I made the effort to be there and sorry I was unable to wait at the pub to greet our other finishers.

Posted by petehorne at Sunday, December 22, 2013 No comments: