The western section did as predicted and met in Hebden, including a welcome visit of two friends from the "far east". That's John & Chris of VS hailing from far distant Brighouse.
The slightly slippery lanes from Padiham brought out the comment from Nigel that "they must have run out of salt round here". And Lo!, at that very moment another Condor rode into view and said EXACTLY the same thing, this being Melvyn of course.
The poor chap in the cafe at Whalley Abbey was there by himself with no staff and, worse, no stock (no beans, and just two eggs). A bacon butty really does need an egg on top to fill a hungry cyclist. Still, it was better than nothing. Partially fortified we sallied forth to the Herders and there found ourselves stationary outside the Old Silent Inn while we regrouped. Well it was, at that point, the only thing to do to pop in for a pint ... 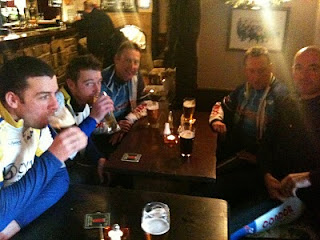 On offer was "Barm Top" from Gooseye Brewery in Keighley, as a very pleasant light ale. The VS lads stuck to familiar pleasures - Guiness & larger, respectively - but it seems to be going down well. Sadly Robin's "Old Peculiar" doesn't seem to have brought out a smile, but he could just be camera-shy?
Now after missing out on my egg earlier, the beer was just the thing to fill my legs. So with a "beer boost" I could go fine on the hill up from Stabury reservoir, and again on the old road back to Wainstalls, to finish feeling good. Its just as well we won't be found loitering in pubs again any time soon ...
Meet Hebden Bridge 09:00 for gentle ride to cafe at Whalley Abbey. So far its the western section - me, Steve Barker, Nigel and probably Robin. Others welcome!
Thanks to Pete for the recent posts - good to see so many out. And Grimpy is a hero with deep section carbon rims in the snow. A true racer.
Posted by Ian Robinson at Saturday, December 11, 2010 No comments: Links to this post