Every year I go on a cycling tour with other patent/legal types. This year we met in Wetherby and rode to Ravenscar on the coast, stayed over in a pleasant old hotel on the cliffs and then rode back the next day. It was roughly 80 miles there (including three cafe stops - we know how to live the good life) and 70 miles back or thereabouts. 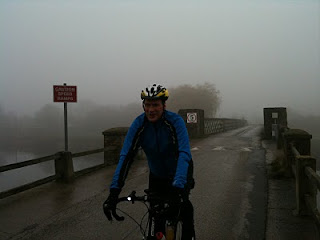 We started in our first cafe and then took in some very pleasant flat miles through Ouseburns Little and Greater, over Aldwark Toll Bridge (free for cyclists), and on to Easingwold (excellent coffe and buns). Then continued through the fog in the Vale of York to the Howardian hills, via Brandsby and Hovingham, for stop #3 at Thornton Le Dale (late lunch, in what turned out to be a bit of a transport cafe really).
Then came a real treat. Which, at least for now, is listed in my book as the best road in England. Just imagine. Freshly-laid smooth tarmac for miles. Easy gradients. Great scenery. Cars are actually charged money for using this road, which meant that we saw about three in two hours or so. A bit of north shore to play on every now and then (but I was on a loaded touring bike so only risked a quick go) . There was even a stall outside a farm near the end in Staindale selling jam and scones. So where is this nirvana? It is the Dalby Forest Drive. From Thornton Dale to Hackness and beyond. And I'll be going back there. Soon.
View Larger Map
I don't have any pictures of our luxurious accomodation. But let me just say that it would have been better if there had been hot water for a decent shower. Still, a cold rinse was enough for decency, and sitting with a pint by the open fire chatting was a reward in itself.
Next day we took in the scene from the Panorama Restaurant at breakfast. We could very nearly make out the waves below through the thick mist, so it's just as well that we didn't pay extra for sea-view rooms. Fueled up we were soon out there enjoying the soft morning air and gentle rain showers. A well-signposted bike path soon lead to a farm field. It would have been better in high summer. Maybe. 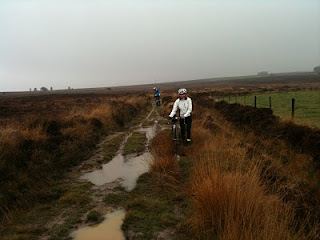 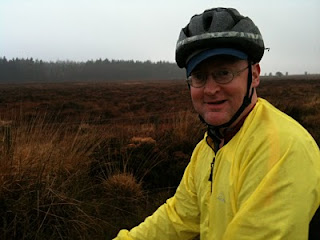 Looking for variation on our return route we headed north and inland to find some frighteningly steep 1:4 descents on wet leaves and poor surfaces. Only to find positively terrifying 1:3 assents on the other side. The sadistic road makers here even managed to take the road half way up the hillside before dropping, sickeningly, back to the valley floor to start the climb again. This is, at least for now, in my book as the worst road in England. Aftertwo hours we'd managed to struggle through Littlebeck and Sleights to reach Egton, where we could plunge down again to Egton Bridge and begin our final struggle up and over the moor to Rosedale. A fine cafe revived our spirits, and we were now within reach of easy flat roads again.
But, of course, we weren't. After hearing representations from both sides, m'learned friends decided that Rosedale Chimney Bank would be a fine pudding. Well, nearly. But the 40mph descent did take us to Hutton le Hole pretty quickly. And Patrick gets to tick another entry in his "100 Best Climbs".
Now the group had to separate and all that remained was to retrace our steps, by and large, back to our respective starting points. And to look forward to another trip next year.
Posted by Ian Robinson at Tuesday, November 23, 2010 No comments: