A few photos and a ramble 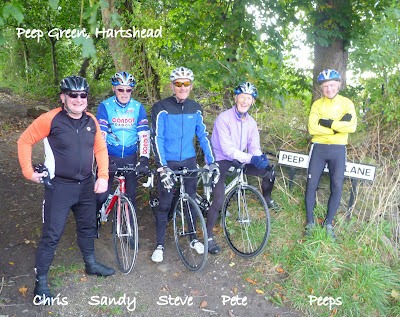 Numbers were depleted for this weeks Wednesday ride due to many being away on the Autumn De-Training Tour - although I've heard from one source that it was the toughest training he'd done all year.
The 6 of who were there decided to head south in search of the sun - a good decision as it turned out, we had a dry day whilst I have seen reports of there having been heavy rain further north. We went over Emley Moor and did a loop round Ingbirchworth Windmills and Harden Clough before taking lunch at Holmfirth. 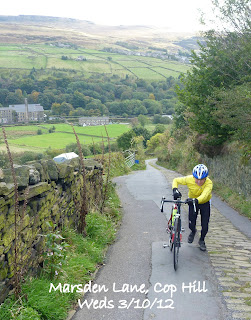 After lunch Steve, Peeps and I went searching the more remote areas of Kirklees looking for a suitable venue for this years Wednesday Club Christmas Dinner. Peeps may have had to wear out some shoe leather pursuing this quest but we did come across a sleepy little real ale pub on the border with Calderdale, The Rose & Crown at Cop Hill, who have kindly agreed to cook up the traditional Fayre on Wednesday 19th December. There's more room than last year so everyone who wants to come should be able to be accommodated.  Its 3 courses plus coffee and mince pies and costs £16.50 and according to Dave Saleem is a very good meal and good value. Let me know if you want a place reserving - I've promised to let them have final numbers early December. I'm wanting £6.50 deposit which should make collecting the balance on the day easy. 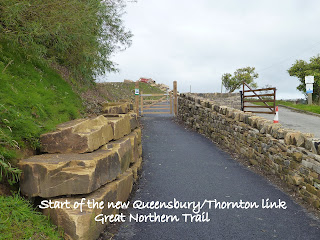 Just for those who hadn't already heard - the new section of the Great Northern Trail is now open, linking the Queensbury section to the Thornton bit. 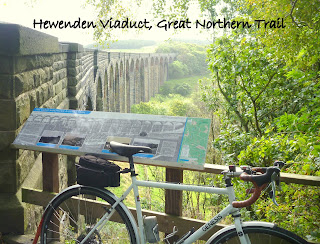 Email ThisBlogThis!Share to TwitterShare to FacebookShare to Pinterest
Well done for surviving the wait and watch at Three Peaks those that made it ... I reckon that was harder than riding it in the weather we had. At least I had some rocky distractions to take my mind off the driving rain. I have to admit to not acknowledging anyone on the course other than Jamie (the cockeeneeey up from t'south wondering what all this northern fuss was about). It was maybe all that grass and moss I had in my ears from repeated failures to bunny hop the bog streams, and Jamie was only noticed because I knew he had a packet of jelly babies on him, and I was hallucinating food at the time. He gave me a handful at Ribblehead but ever desirous of more I stopped and knicked the whole family bag off him. I was then able to dispense these both to myself up Pen Y Ghent and others equally buggered, who on being told where they came from thanked Jamie for his nearly saintly existence, which is putting a little strong, given his tendency for mild deviance, but then saints were once sinners, so this could indeed have been the watershed moment for his goodness to have come through and bathe his life entire. Meantime, I was just bathing in peaty water. The start at Gill Garth began with a large puddle into which, all around, riders were having a dip. I had backed off a bit having had need of a slug of Ventalin - the wheezy cyclist's friend - so was able to take in the carnage without too much risk of being forced in there with them. The slope up Ingleborough was as lofted as ever, one guy I saw face plant on the very steep stuff and slide down on said face, bike pinning him to the turf for at least ten yards. Cold Coats found me breathing more easily and into a fairly steady rhythm, the rain not really allowing much else, and so the ride unfolded slowly; heavy going and soggy skin found me wanting food where usually I don't, though i'd no need of drink, the gods providing that form of bounty with divine largesse. Up Whernside was just steps steps steps, followed by the tricksy decent off Blea Moor that always provides some 'header' entertainment. There was a goodly crowd at Ribblehead in spite of the rain, all hollering and rattling their bells, which was good to hear albeit distantly (ears still full). Road to Horton was a right slog in the wind, but lightened by the sight of some old boy handing out what looked like Mars Bars from his front garden. And just for some symmetry the ride ended with another whopping puddle at bottom of Pen Y Ghent, which cleaned the bottom half of the bike-body ensemble rather nicely keeping my hairy legs camera friendly for the ascent. Saw Grimpy on way down, but he was wearing some bespoke kit I think, so the recognition was not instant, is this available to all of us I wonder? Finished 89th in 4.19 which for me felt fine. Next year of course ill be there, right? Season of Mists tomorrow I think.


Posted by robin at Saturday, October 06, 2012 No comments: Links to this post