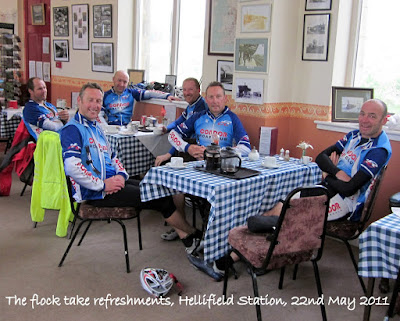 Gale force winds, hail & rain failed to deter the Condor hard men last Sunday (although it did reduce mileage somewhat). Seven made their way to Hellifield Railway Station cafe via Keighley, Broughton & Airton. On the road to Otterburn, prompted by a downpour, I made the mistake of stopping to don my rainjacket; big mistake, should have known better, the positive was that after several miles battling alone into a fierce headwind it was none other than The Condor himself who dropped back to help me reclaim the comfort of the peloton.

What a star that chap at the cafe is, coping alone he soon delivered steaming teapots and sandwiches stuffed to overflowing with sausages -just the job for hungry athletes.

We were on the road again before mid-day, into gusting, heavy showers on the road to West Marton and Earby. The cunning plan had been to follow in reverse the Spring into the Dales route over Bleara Moor and Black Lane Ends to the Herders and Oxenhope. However, group negligence allowed Robin & Mel to go to the front together and by Thornton-in Craven I had lost the necessary enthusiasm for getting hammered into the ground over that hill out of Earby so I announced that I was going to go around the hill via Foulridge to get to Laneshaw Bridge. Nigel was all for it but Mel and Robin were keen to gain altitude points. I was at the front with Mel at Earby when as expected he turned left for the high road. Ian came alongside me and we battled against head winds and very heavy rain as Ian remarked on how aptly named Foulridge is. At this point I was surprised when Robin came through to the front - he should'nt be there, he'd turned off at Earby with Mel hadn't he?. Glancing back confirmed that only Mel alone had left the safety of the bunch to tackle the high road. Once we got to Laneshaw Bridge we caught sight of Mel a few hundred yards up the Herders Climb. Robin shot off like a man possessed and soon caught him, at one point I thought Nigel was also going to chase, but he soon saw sense as we all settled into a more realistic rhythm. Richard was riding well, as he had been all day, Ian's new Dogma was effortlessly floating higher and higher, and Steve, 1st time out for many months due to being busy building a new wing onto Pecket Well Palace, was looking very strong.

We re-grouped over the top and split up at Oxenhope where Richard, Mel and myself were caught up in a torrential downpour going over the Dog & Gun climb, at least it was on our backs, if the others had the same shower it must have been hell riding into it.