Having completed a small number of 200km audax rides it was suggested I might like to consider a 300km one. Well I was more than a little apprehensive but was informed that the Wiggy 300 on 11 May 2013 is relatively flat and that we would be going very steady.

I know the code. The Audax is a cycling sport in which participants attempt to cycle long distances in a pre-defined time limit and it is non competitive. The sport originated in Italy and audax is derived from the word “Audacious”. The word means extremely bold daring and reckless – everything follows a pattern and I started thinking I should I do this. The potential certificate the Brevet d’Audax was also a consideration. However, my final decision was based upon the reassurance of the other riders that this would not be a eyeballs out ride! We would be looking at a very steady ride! Well I took this at face value

Well the weather forecast for the 11 May was not good. As the weather forecast was not good I decided I would take my winter bike.  I read up on Wiggy ride and it said much of the ride is in the sticks so make sure you take all you need for the ride! Well I think I took everything except the kitchen sink.  I think all the other riders were more than a little surprised by the weight of the seat stem pack. I had to get out of my warm bed not much after 2:30 in the morning in preparation for a 5 am start in Wigginton near York. The weather initially was dry, a little windy and the sky was blue.

We made a good start and initially the riders kept together for the first 50 plus miles. This was very enjoyable. We saw deer, rabbits, ducks etc and I must say that not only was the scenery beautiful but the pace enabled you to take it all in. Then for no apparent reason (perhaps a little hill) or more likely a need to prove one self, the pace picked up and we continued to do 20 plus miles an hour, irrespective of the terrain. Well by the time we were approaching Ripon I was starting to struggle a little and was just dropping of the back of the group – we had about 90 miles in. I eventually got to Ripon and headed for the center of the city to re-group– my first mistake. I could not find the other riders so I then decided to sit by the cathedral and have a snack. I thought should I drop out and take in a few pubs and take a leisurely ride back to Wigginton. This might have been the decision of a sane and sensible person but I am not one of those but I did give it some very serious thought. I read the instructions and made my way to the rendezvous in the park. I found the group as they were preparing to leave the café – so no hot meal or sit down. They gave me a little pep talk and made it very clear I should continue and forget about the pubs and an easy ride back to Wigginton.  I had not left Ripon when the seat stem pack holding bracket collapsed. There I was with a heavy cycle pack and no way to secure this to the bike! Well it was like the scrap heap challenge and with tie wraps and bits of leather it was made good! I was starting to think that my luck might change but then I noticed that rain was becoming more and more likely

The ride continued at a fairly fast pace and at this point I was feeling a little tired and hungry but was advised I would be able to get a drink at Richmond but there would be no opportunity to have a sit down in a café until Stokesley.  Well I dropped of the back again and thought I would do my ride. Unfortunately, this did not happen! Peter Horne wanted to ensure I completed so he generously decided to cycle with me. Well what does not kill you makes you stronger. Peter has hopefully made me stronger but it might be a few days before I see if this is the case!
When we arrived at Stokesley we had completed 150 miles and we went into an Italian restaurant and had a spaghetti Bolognese. It was fantastic! This enabled me to muster the energy for the final but harder 40 miles.
The last 40 miles went surprisingly well. I think the body might have closed down a little and got used to the pain. It was probably a simple as not long to go and the finish looked on. When we did get back to the community center  - it was heaven. I could sit down, drink tea and eat lovely cakes.
I joked with the young lady who organised the Audax.  Well she did look younger than Pete and her cakes where very nice. The lady was apparently a very keen rider and has been on TV and has completed more Audax’s than Pete. However, the best bit was she promised me aWiggy 300 Audax certificate. I will have to think were I put it – any suggestions!

Pete Horne says,
You can tell from reading the above he'll be back for more.    Although it was a bit windy we were lucky to miss the rain, although it was apparent from the state of the roads at places that we had only just missed the downpours, in fact I think that Mel, who was 20 or 30 minutes ahead of us on the last section from Stokesley did get caught in a hail storm.  As ever Mel was going well and was the strongest in the event, I was more than happy to drop back when Phil went through a bad patch although when he suddenly found his legs after about 160 miles I was beginning to have regrets. Simon, on his single free was yo-yoing, unable to pedal fast enough on the fast sections but always catching up again. Phil, Simon and I finished together (thanks for waiting for me) having averaged about 17.5mph for the 189 miles, Mel finished half an hour or so ahead but waited at the finish to greet us before heading off home to prepare for his birthday celebrations the following day.

Mel14 May 2013 10:01
Well done Phil - glad you came around & sort of enjoyed it! The weather contributed to a great day although I understand Phil prefers more 'extreme' conditions. Highlight was the spag. bol. & then a glorious ride over Chop Gate to Helmsley. The wind made it a hard run-in it but could have been a lot worse. Pete has declared 300k is his limit, however I quite fancy the 'Old 240' 400k in August !?

Wiggo-no hes not riding our event? but i found someone whose slower than me on descents or has the chimp taken over we will see tomorrow on the first mountain top finish guess he needs a rant from shane sutton - its not looking good?
Anyway reason for post anyone who wants a pdf of the race details just Email me
Cheers
Posted by John G at Monday, May 13, 2013 No comments: Links to this post


A polite reminder to those who haven't responded so far, we need everyone to support the event, latest position is:
Start sheet/programme done and we have 3 lead cars assigned, 2 judges alocated,need at least another.
Have a number of marshalls more needed? we have again the kind support of Ross Smith for signing on and with a bit of luck Richard Booth will be assisting - although in his case if he's late (travelling from teeside) another volunteer is required?
Need a volunteer to support Martin Cleminson who will be posting all the major warning signs on the course to be at Greetland Community HQ for 8.30?
I will be at the HQ from around 8.15 on saturday meanwhile you can contact me visa Email on johnginley@btinternet.com or mob 07973 328995.
Hopefully if i can do it and blogging allows i will attach both the rider list and race programme to assist everyone.
Meanwhile i would like to thank everyone for there kind support.
Finally club members riding are Damien, Melvin and young Peeps also Sean Smith from the imps.
Sorry i can't attach a pdf but i have managed to use a feature on my PC which takes a pic of screen and gives you rider list & programme notes hope they are useful? see you saturday
Cheers 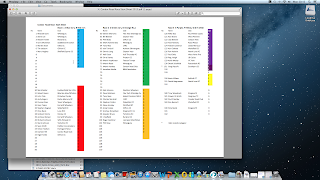 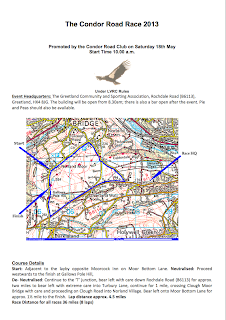 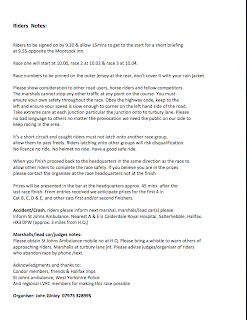