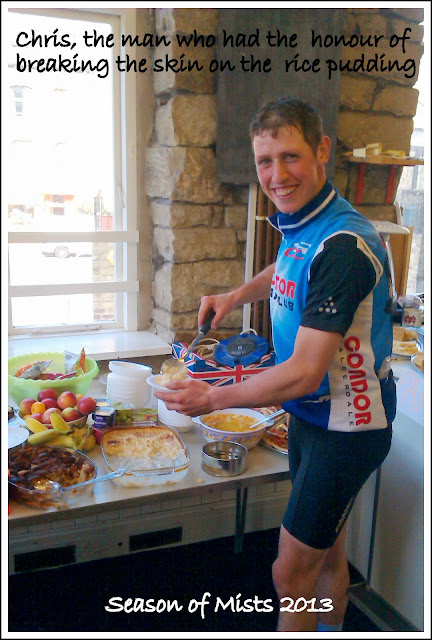 Once again CTC Calderdale have excelled themselves, a super route, magnificent weather and a terrific spread at the finish. It was good to see so many Condors stretching their wings, glancing around at the start I saw the following; Ian Robinson, Nigel Hartley, Steve Barker, Robin Holt, Chris Sylge, Graeme Brown, Pete Smith, Phil Haigh, Phil Purdy, Pete Whiteley, Stewart Harper and of course Chris (Padiham) Smith (apol's had been received from Mel Hartley and Paul Daly (chest infections), Simon Fortune (bad back), Richard Burnham (riding cycloX sportive in Lakes) Paul Priestly (grandchild minding), Paul Gower (Olwen would'nt let him out) - sorry if I've missed anyone.
At 9am Padiham Chris and I led the large peloton out of Salem Street. Once on the climb up to Heptonstall I couldn't match Chris's pace, but there again not many could. Whilst Chris, Robin, Graeme Brown and Chris Sylge flew the Condor flag in the leading group together with Condor friends such as VS's Dwarty, Dom, Martin plus young Alex who showed us old folk a clean pair of heels up through the Heptonstall cobbles.
Myself, Pete Smith, Everest Phil, Stuart and a few others formed a 2nd gruppo, teaming up with Brian who had been pottering up through Slack and the 3RT as far as Blackshaw Head. Despite a head wind over the Long Causway and on towards Burnley we made good progress regularly reeling in riders dropped from the 'tete de la course' until we eventually caught Padiham Chris who was guiding a number of riders, including Chris Sylge, round the back streets of Brierfield en route to the road to Fence.
I went to the front to have a chat with Chris but now he'd got his bearings again he was difficult to live with so I gave up trying and he went off up the road. Not surprisingly those he had been towing round the back streets were also happy to let him go, all that is except for Martin Croft who, not having ridden with Chris before, foolishly attempted to go with him - he soon learned his mistake and I doubt that he'll try that again (however there are those who never learn).
Nick o' Pendle came and went effortlessly and we caught that famous Hebden Bridge butcher and star of the YouTube sensation 'Keep it Local - the tale of a £10 note', Dave Woodhead (he insists he doesn't always fall asleep at the bar after 3 pints) see https://vimeo.com/74907859 . Dave's Colnago is moving really well having recently completed the end to end and he joined us for most of the rest of the ride as did his cycling companion, Cragg Vale's Jon Embleton. He and Martin did have the occasional foray up the road over Newton Fell but were hampered by not knowing where they were or where they were going so they finally realised their folly and settled into the peloton.
As we passed through Slaidburn there was a rush of cyclists dashing out of the cafe, it was the 7 man break who had been about to settle down to enjoy the delights on offer when they witnessed a lone rider in Condor blue on an old black aluminium steed with steel mudguards and a saddlebag pass by without showing due respect to the carbon fibred electronically geared bike porn stacked outside the cafe. There was panic among the ranks with Mark Sadler, Dwarty and others sprinting off up the hills in their vain attempt to bring our own Padiham Chris to heel.
I don't have a blow by blow account but do know that Chris got back to the finish in lone splendour. When I finished at 1.15pm Dom was protesting that Chris had somehow cheated by being self sufficient and not having to stop to re-fuel - some may think that is a rather weak argument - I couldn't possibly comment.
Posted by petehorne at Monday, October 07, 2013 No comments: