It is muddy bikes this week. And it looks like shorts & short sleeves.
For what of a better suggestion, let's meet 08:30 at my house.
The route might be a reverse of the Stanbury-Wycoller loop and hopefully we can fit in a visit to the cafe in Heptonstall.
Pete Horne also mentioned a 200k Audax starting Burnley way and going round Tan Hill see http://www.aukweb.net/cal/index.htm.
Ian
Posted by Ian Robinson at Saturday, May 30, 2009 1 comment:

Blame it on the Boogie

Sorry guys I have to own up, I sort of gave up, on Sunday, on the long drag from Airton over Scalebar to Settle.

I could blame it on my gears which were misfiring, and my injured knee which, to be fair, was giving me jip, but this really doesn't wash, so, perhaps I should blame it on the deadening effect of three hundred flat and steady miles over the previous weekend, and then, for good measure, blame my age.

On reflection, none of this will do; might just as well blame it on the boogie. Truth is, as I say, I sort of gave up; not really a good plan with Robin and Melvyn, on the front, tapping out tempo.

You'll be pleased to know I gave myself a good kicking on my solo ride from Settle back to Keighley.

Hope you all had a good day and see you next Sunday!

PS What's happened to Brian? I passed him going up Ingrow - you won't be surprised to know I was in a car, he was on a bike - at first I didn't recognise him, not a hint of Condor blue but pretty in pink - has he lost the faith?
Posted by Richard at Monday, May 25, 2009 No comments:

The twins have a plan to ride sensibly and steadily this Sunday on the quiet lanes of Lancashire away from most of the traffic. I'm hoping for an early cafe stop in Settle on the way there.
Meet Denholme at 8:30, Keighley at 9 and we should then find Nigel & Melvyn at Steeton traffic lights for 9:15 (don't ask - wait, on second thoughts, go on ask them, it'll slow them down a bit if they have to talk as well as ride). Cheers, Ian
Posted by Ian Robinson at Saturday, May 23, 2009 No comments:

Regional Road Race Championships
The Regional Board is promoting the Regional Road Race Championships on 31 May 2009 on the Denby Dale course with the race HQ at Penistone Grammar School. An additional 15 marshals are needed to assist on the day between 9am and 2.30pm. Please would you ask around your club members for volunteers. Please contact Jason Metcalfe: telephone 01484 432043 mobile 07912 221092 email Jason@hanson-cs.co.uk for further details or with offers of help. Your assistance is much
appreciated.

The Ryedale Grand Prix
Marshals and helpers are urgently needed for this event on 7 June 2009 based at Duncombe Park, Helmsley in the North Yorkshire Moors. The added bonus of volunteering to help at this event is a free entry to the Ryedale Rumble, one of the most spectacular sportives in the country, on 9 August 2009. Please contact Bob Howden: telephone 01924 379443
mobile 07739 892 056 email bobhowden@grasscrete.com

Racing has re-commenced at Roundhay Park in Leeds for the new season of racing. Following extensive drainage work, the track is at it's best for years. We offer competitive racing for kids, seniors and veterans. Under 14's ride on freewheel bikes while over 14's (including adults) ride fixed wheel. There are a variety of races throughout Monday evenings on offer plus a regional championship planned for the 13th July. The league will be in the form of a series with 9 races out of 13 to count. 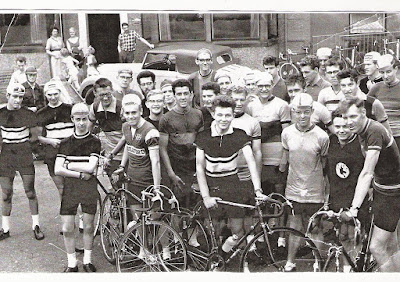 This is a photo taken at a road race at Foulridge in 1959 - can you recognise Grimpy?

Has a ride been organised for next Sunday? If not can I suggest 0830hrs Denholmgate for Silverdale or perhaps Buckden triangle with refreshments at Zarenas

You can now post to the blog by email using a top-secret email address.
Send your message to "condorroadclub.[secret]@blogger.com".
Where [secret] = the bits of your bike with hubs, spokes and rims!
Posted by Ian Robinson at Tuesday, May 05, 2009 No comments:

This year, the Condor Cross is on Saturday 31st October 2009.
John was unable to get a Sunday Date in October or November any free Dates were unavailable at Bradley Woods.
Because it’s a Saturday event we are combining the VETS & Senior races so less time on site for helpers.
Posted by Ian Robinson at Tuesday, May 05, 2009 No comments: 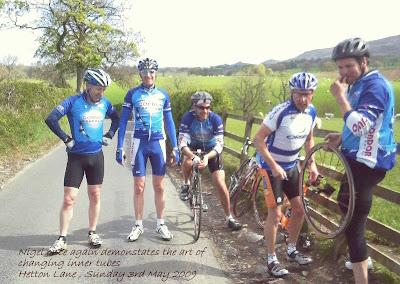 A few local events that may be of intrest to fellow Condors :- 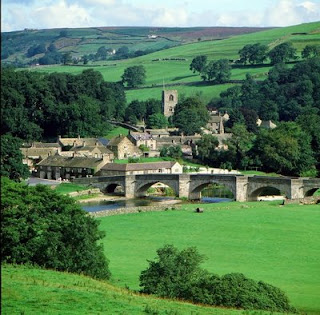 I was pleased to see Pete, Vicar and Nigel had hung on at the start - one of the advantages of saying you are going to come on a ride is that folk then kindly give a couple of minutes grace to latecomers. One day I'll make an extra effort to set off in good time. They even accepted my suggestion of going over Eastby Brow, but the return route through Thorpe and Gargrave made better use of the strong westerly breeze. The strong tailwind was a real help and the pace was sensible, so for once this flock of Condors crested a hill pretty much as one bunch. Robin had joined us in Keighley, along with Steve who is now out of hibernation and traing for the Etape du Dales in a couple of weeks. The extra loop up Greenhow was discussed but then rejected and we were in the cafe at Burnsall by 10:30. The early stop was welcomed by Vicar after a late night. Pete was gravely dissapointed not to get his customary cake (and told us so) but the boys were eager to be back on their bikes.
As a fine spring day with plenty of sunshine this was a great 60 miles and no-one finished on their knees. Well, maybe Steve did seem a tiny bit tired as he went back over Cock Hill. I did hear him say something about how the wind had changed since this morning and, gosh, he was so delighted that now there'd be a headwind going back as well...
Posted by Ian Robinson at Monday, May 04, 2009 No comments:

As a suggestion, how about meeting 08:30 at Denholme Gate this Sunday and we'll pick a route from there. Nigel & I both expect to be out. All others welcome.
Ian
Posted by Ian Robinson at Saturday, May 02, 2009 No comments: