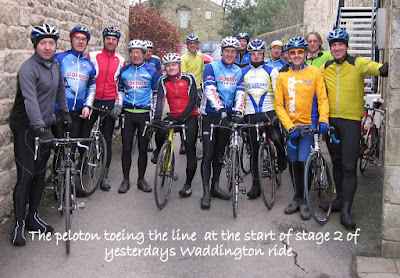 A very good turn out yesterday, several new faces in the bunch including Holme Valley champion Steve Robinson; a rather fast looking guy with a VS top on, I hadn't met him before but I think he is called Andy (apols if I've got that wrong), and a recent immigrant to Calderdale, Stuart Harper. Not having been out with us previously Stuart had been concerned about whether he was up to the pace but he looked comfortable all morning. We went the planned route to Waddington. Pete Whiteley broke his chain at Broughton so we had a welcome rest whilst he got his hands mucky - I was tempted to potter on a bit by myself at this point but Neil pointed out the error of my ways - I was cursing him half an hour or so later as I was struggling to keep on the back of the bunch up those long, straight, gradual inclines before the descent to Bolton by Bowland - why is it that every time Mel goes to the front my legs and lungs hurt - it wasn't like that 35 years ago -mind you he didn't ride club runs on Ksyrium ES's back then, that must be the reason. Due to having to be home early we said goodbye to Grimpy, Dougie, Chris Brown and VS Andy before lunch.

Once fed and watered I heard a rumour that a return journey via Downham, Pendle and the Herders was being planned, there was no way I was going to keep anywhere near the peloton over those climbs so I made plans of my own - Whalley, Padiham and Tod. Brian, Richard and Kev Brown volunteered to keep me company - things were looking good - but then Ian and the two Pete's (Whiteley & Smith) gatecrashed the party and my plans for a steady potter home were in tatters.
I hope someone blogs a report about the Pendle/Herders route home - I have heard a few snippets which may or may not be correct - one is that Mel had a go at half wheeling Steve Robinson (no surprise there then) but Steve gave as much if not more than he got. Also that our new man, Stuart, was left to fend for himself in unfamiliar surroundings somewhere on the top of the bleak pennine moorlands - in fact I have been given a ticking off by the club treasurer, Mr Gower, for throwing him to the wolves before getting £6 subs off him - hope you found your way home alright and we look forward to seeing you again.

Posted by petehorne at Monday, January 31, 2011 No comments: