We're meeting at Denholme again this Sunday (1 Feb). I don't know if it's too early in the year for Silverdale but as we're meeting a little earlier this week (9am) I guess it would be feasible. Any opinions?
Posted by Sean Smith at Thursday, January 29, 2009 No comments: Links to this post

We're setting off from Denholme Gate this week. Could I suggest Arncliffe via Kilnsey, return via Malham Cafe then home? Any other suggestions or variations?
Posted by Sean Smith at Thursday, January 15, 2009 1 comment: Links to this post

Grimpy does it again (and again)! 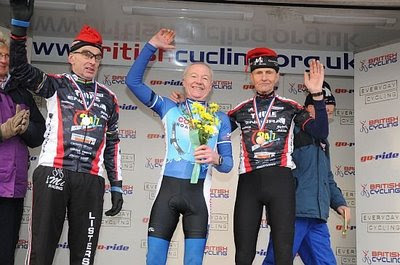 First off we have a report of John's success winning his age in the North of England Championships held at Hetton Lyons Country Park on 3 January 2009.
Then it was another victory last Saturday 10 Jan 09 at Peel Park in Bradford taking first 65+ in the National Championships. Brilliant! Gower and Brian were there for support and to cheer him on.
I wonder if we can get the UCI Cyclo-Cross World Championships 2009 live on BBC Grandstand? It is the same day as the club dinner - 31 Jan - so John may have make a difficult choice which to attend.
Posted by Ian Robinson at Tuesday, January 13, 2009 No comments: Links to this post

Slightly reduced numbers for the training ride this Sunday,with just 7 turning up in Shelf. We decided to stay to the east of the Pennines to avoid the reports of rain on the wrong side. This in the full knowledge that we'd be heading directly into the South Westerly wind on our way back, ce'st la vie! With just one representative Condor (Damian) we did wonder where the Condors were - but didn't dwell on it too long before setting out for the wastes of Bradford.

We were doing Melvin's ride of last year, through Otley over Leathley, Beckwithshaw, Bland Hill, Swanby Reservoirs and back to Otley. Damian and Neil's legs decided they were having none of the pace set by John Dohety and Chris Thompson as soon as the gradient went upwards after Leathley and took the short cut back to the cafe in Otley. Soon after the reservoirs the distance was getting to Niall, so Sean gamely stayed back with him while Martin Gargett, John and Chris pushed on into the gale force headwind.

A quick regrouping in Otley and we were all together for the push home. Inevitably, tired legs kicked in again on the grind out of Bradford and the group split, much as it had before. The rain held off long enough for us to get home dry - another good hard ride under the belt.
Posted by Sean Smith at Monday, January 12, 2009 No comments: Links to this post

The first run of the year seemed to go OK and people joined in or dropped out as they wanted. It was good to see so many out. Sean & Niall, Grimpy, Damien, Irish John, Young Johnny, Melv, Vicar, myself, and Andy (eventually, after he'd chased on all the way from Denholme to nearly Skipton - it was good extra training and I'm sure he's benefitted from the workout).

There were still five of us to enjoy the good butties at Madame Zarina's cafe and watch the 2CVs go past. On the way back we met up with Janice & Paul Hicky who were coming home from Cracoe. I think they were the last remnants of the joint club run but I was happy for a few miles at that pace.

Not wanting to overburden the roads with too many riders in one big group we then managed to split four ways. I'm not sure how, but Vicar managed to become separated from us while ingesting his Black Cherry Yoghurt Flavoured Energy Gel just before Cononley and he decided to go the "other" way through the village. So, Vicar turned left toward the main road. The rest made their way over the small climb to Crosshills and I found my car with Young Jonny pleading tiredness and taking a lift while John made his own way on through Keighley.

It was good to be sitting down all the way up Ingrow (with just my right ankle doing any work - on the accelerator). We eventually overtook Vicar and then, later, Paul Gower who declared himself "buggered" after apparently having riden by himself all day, but he was close enough now to Queensbury to refuse any offer of help.

A big thank you to the lads who rallied round and got me and my bike back to civilisation on Friday after a dumb choice of route resulted in me stacking on an ice shelf in Grizedale. I sit typing with one hand after an x-ray on saturday morning confirmed a fractured shouder.Dont think I'll make the Kettlewell run on Sunday!
Nige.
Posted by nigel at Saturday, January 03, 2009 No comments: Links to this post

It's that time of year again guys!

We've put together a list of meeting times and places for the upcoming training season, it's on the CCA website (Ian's also published the list in the Condor Beak). The hope is that a set list will ensure that even if no-one takes the initiative before the Sunday we can all be assured of a few friendly faces (and one or two wheels to sit behind) on the morning. Perhaps we could use the blog to discuss the route/destination beforehand, failing that we could decide on the day.

We've got 9.30 at Denholme Gate down for this Sunday's meet, traditionally we go up to Kettlewell on our first ride. Everyone up for that?

Unfortunately, I'll not be along myself this week as I have a cast on my left wrist. I'm hoping it'll be off by next week.

Happy new year to all.
Posted by Sean Smith at Thursday, January 01, 2009 No comments: Links to this post