Great turnout at Brighouse this morning, 11 of us; John Ginley, Brian Sunter, Damien Hill, Paul Daly, Chris Smith, Garry Traviss, Dom Turner, Steve Thewlis, Richard Burnham, Phil Purdy and myself set off up Huddersfield Road and were joined by Simon Fortune as we descended down towards Fartown. 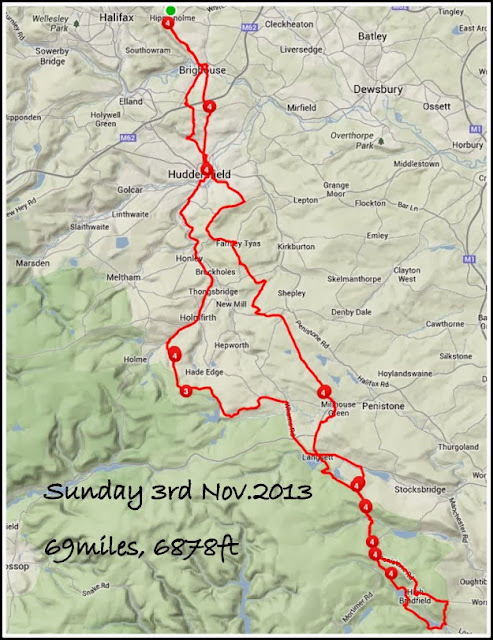 At the start I went to the front hoping to set a comfortable pace over to Huddersfield, unfortunately I was joined at the front by Chris who had had the benefit of a 30 odd mile warm up to get to Brighouse, he almost immediately began to pull away from me. I decided not to struggle to stay with him and let him go thinking that once he realised he was up the road alone he'd slacken the pace, come back and ride at a pace us pensioners could cope with. Sadly I hadn't accounted for the presence of Paul in my cunning plan, once he saw the farrier pulling away he bridged the gap leaving us with the worst possible scenario - Chris and Paul at the front together - and all this before we got as far as the Co-op Undertakers.
Once over Fixby the pace became a little more comfortable although the weather didn't follow suit with gusting winds and rain showers adding to the excitement and anticipation of the terrain to come.
When todays ride had originally been discussed we were going to follow the Tour route over Holme Moss but the thought of Woodhead Pass to The Flouch, a cycling unfriendly busy racetrack, put us off the idea. It was Grimpy who came up with the idea of turning left at Holmebridge and going up past Holmfirth Vinyard to Harden Clough and down past Winscar to Dunford Bridge. The Vinyard road is just as steep as it always was but we were lucky in that the gusting winds were behind us. We stopped to re-group at the summit but were to discover that Richard, who has been absent in recent weeks, had been lost in action -  Richard, what happened? where did you go?
The 'tete de la course' were taking no prisoners and, having foolishly stopped to take off the shades which were obscuring my vision due to the driving rain, I was struggling to re-gain contact and was relieved when Simon, Brian and Steve showed unusual common sense and stopped to don rain jackets.
At Crow Edge Brian mumbled something about being able to go out tomorrow and turned for home - and then there were 10 - we re-joined the Tour route at The Flouch and followed course past Langsett to turn right to Midhopestones. What a treat the Tour riders have in store next July, this little climb which probably doesn't even register as a climb in the Tour route book had a devastating effect on our numbers with Grimpy and Simon both throwing in the towel and taking the home-bound road, having conquered the Haute Route Alpes and the London-Edinburgh-London between them this year it was a Condor club run which broke them;  mmm, I'm not entirely convinced that this is how social season club runs should work but no one ever listens to me (or they wouldn't turn up with no mudguard flaps).
The remaining 8 continued over the Strines Road turning left on the beautifully (Tour ready) resurfaced lane to High Bradfield where (don't blame me, blame Christian Prudhomme), we turned left and up yet another challenging climb, I'm sure I heard even the normally reserved Oakworth Steve quietly swearing. At the top we abandoned 'Le Tour in Yorkshire' and dropped down a steep singletrack road to Damflask Reservoir, crossing the dam wall and going to the (Richard Burnham recommended) cafe at Low Bradfield. Not everyone was happy with the cafe but I'm not going to dwell on that now (I'd like to invite Paul Daly to submit a review of the establishment).
Once refreshed we made our way on some little used back lanes back to the Strines road and to Langsett via Upper Midhope and then over towards Penistone and to Thurstonland and Farnley Tyas via the Windmills road.  The weather was improving now and by the time we got to Castle Hill and Almondbury the roads were dry and spirits were high - they must have been too high because on Halifax Old Road out of Fartown, just so we could ride through that ford at the back of Huddersfield Golf Club we took a right up the steep single track lane to Cowcliffe Hill Road. However it proved to be a good choice as it led us to The Roundhill where we enjoyed Timothy Taylors finest ales and a cheese buffet. Happy days indeed!
Posted by petehorne at Sunday, November 03, 2013 No comments: