Despite my best efforts to confuse everyone (including myself) several Condors did make it to Airton Cafe today. We went via The Duckpond and Winterburn getting to the cafe at about 11o'clock and just beating the rush. 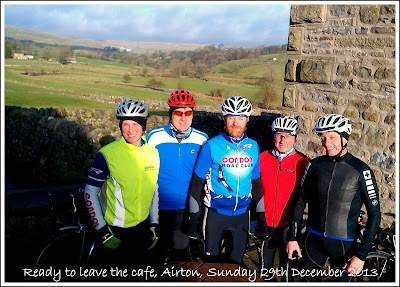 Ian was keen to take an easy route back to Halifax where we had an appointment with Neil and a barrel of beer. This easy route included the Cononley B'stard and up past Aberdeen Farm to Cold Edge Road, I was relieved he hadn't fancied a challenging route. I'd like to say that, with training not officially starting till next Sunday we rode together in a disciplined ' season of goodwill ' manner but this was not to be with Ian putting in a stinging attack on the A59, Nigel clipping off the front after Carleton, getting Damian and Chris all excited, then Damian & Chris making all-out attacks on the B'stard and again up Cold Edge. Although it's not really the 'done thing' to award KOM points for Christmas week club runs I've been asked to mention that Damian got the better of Chris on both these 'hors categorie' ascents - in fact there was only Steve Thewlis and me who rode sensibly.
It was then down to Highroad Well for  a well earned pie & peas and a pint courtesy of Neil and his missus, thanks again for your hospitality. 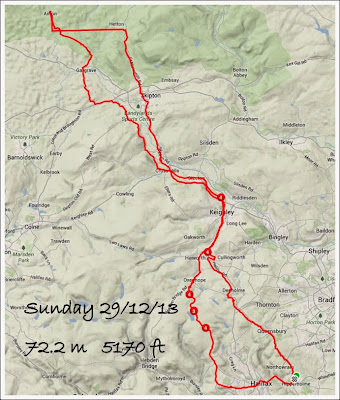 Posted by petehorne at Sunday, December 29, 2013 No comments: Links to this post