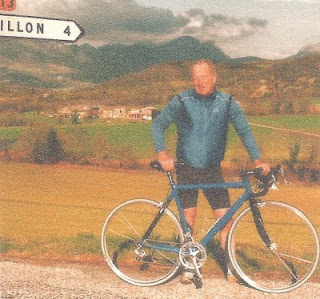 Here are some thoughts on Philip Smithies by Paul G, who attended Philip's funeral in France on Monday 8 June 2009:
We first met Philip in early 1970 when he was riding a 12 hour time trial at Wetherby in the name of Condor Road Club. We found out straight away that a very strong and determined rider had joined our circle.
Like many cyclists born in Calderdale, Philip started riding his bike in his early teens and was soon riding long tours up and down the country. I think that if you can cope with the steep hills and hairy descents round here as a teenager, then you will be a cyclist for life - which is exactly what Philip was.
Philip joined in wholeheartedly with the social, racing and touring activities of the club, winning many races and championships. Before his illness, Philip was our general secretary for many years. He was always there to encourage younger riders to be more competitive.
Not only was Philip a good cyclist, he was also a very good swimmer, played football for Southowram for many years, and a good tennis player - in fact an all round sportsman.
Philip and Paulette had found their ideal home in Southern France to spend their retirement swimming, cycling and playing tennis in the stunning countryside. Unfortunately you can never actually predit the future and, as I said at the crematorium, its with these happy memories of Philip that we wish him well on his longest cycle ride. May the sun shine on him and a tail wiind follow him everywhere.
Posted by Ian Robinson at Saturday, August 01, 2009 No comments: Links to this post