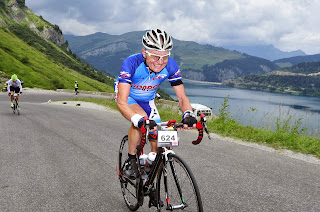 In between trading and getting ready for my first cross I thought I would relax and bore your socks off with my recollections of the haute route event. Cross- reminds me of criteriums after the first lap you are wishing for the end?  Whoops I made it 13th in O50’s a reasonable start and it says I was 1st O60 – need to go faster- back to HR.
They say it’s the toughest longest, hardest, even a race for the first 100 or so. It has over 800km timed sections plus added kilometers to the start of each timed sector. 20 major cols a few over 2500m (Col de I’seran, I.Izoard, Bonette (highest paved road in Europe) etc. For all the info just check out http://www.hauteroute.org
The sort of event Mel, Chris and Pete would relish. Although unlike Simons London/ Edinburgh ride its split in 7 days so plenty time for beer & sleep. You just have to take your time and breath in the scenery and keep ahead of the lantern rouge. Easy?

Pre- Start Stress
Major problem the organizer’s needed a 10 page questionnaire completing with a doctor’s certificate stating I was fit to ride over 2000m? The local shelf health Centre (requesting pound notes) insisted I had an examination with blood tests etc. Resulted in the doc. signing the form whilst adding the comment ‘subject to riding sensibly and not overexerting himself, I should survive---‘ .?  Surprise surprise I was accepted.  I booked the event through sports international.
The Sports international Team
All told we have 14 in the group, which included, a South African, American, and Canadian (farmer spends winter in Mexico and summer racing in Italy) all with female support an Australian (John Irvine) another farmer, quite a decent guy for an Aussie, we had lots of banter on the trip having similar styles and ability.
He been away from Oz for around 6 weeks mainly with is son who his a top young rider hoping to join a European team next year.
Rest of the crew were English and yes I can confirm the sport is the new golf, two helicopter pilots, a freelance photographer and a teacher come specialist record collector.
We are split into two teams. I’m in team 2.
On arrival in Nice its build the bike up, get it through examination and collect your kit, which included bags, haute route team clothing and lights?
Just complete in time before our get together at a local auditorium for a lecture on the event, explaining route, procedure, Mavic support etc.
The Event.
Have to be at the start line at 6.30, one end of lake Geneva (adjacent to that big hose pipe). It’s a beautiful sunrise with I’m told 600 riders ready for the first stage to MEGEVE. We are off at 7.00 in groups of around 100 riders at only 1min intervals, each with motorbike escorts. I remember riding in the same direction with Brian years ago to Evian, the first 25 km or so are neutralized, it’s then through the timing mat and up the first col then down to Morzine to climb the col de Joux Plane (often used in le tour). We arrive in Mevege via the old cambloux road well inside the time limit although I had to stop twice for cramp in my right calf, reliving it with stretches. Unfortunately that Aussie Irvine passed me whilst I’m stopped. It’s noted. Me think’s I need to change my climbing technique to lower gears and staying in the saddle. I did and amazingly didn’t get cramp again?

Stage 2  Megeve to Val d’lsere (8.00 start)
Breakfast at 6.00. I got down for 6.30----
Highlights?  Col des Saisies, Col Du Roselend, Bourg St. Maurice to Val d’ Isere.
No flat at all today you are either going up for 20km or down. The first section is fine climbing through pines to the ski station on top of Saises. On arrival we get an amazing view of Mount Blanc. Dodgy descent a major crash I get the impression some go down thinking the roads are closed? Me I’m slow, I take my time always mindful of the big drops and for some reason the height seems to effect my balance, maybe its because I’m an old? Any excuse, shit Irvine passes me like I’m stopped.
Eventually arrive at the foot to find an immediate sign directing us up Rosemont.
It’s a nice gradual climb after a feed station at midway we climb to a plateau and around a turquoise lake, then upwards to the summit.
Descend to Bourg St Maurice and on to Val d’Isere via a twisty side road upwards through pines, after a brief section on the main road we turn right eventually climbing up to the Val d’Isere reservoir, I can see that scot/aussie (Irvine) ahead and just pip him to the finish timing mat.  We are around 2 hours inside the cut off and head to our ski hotel lodge for the night. Nice pad.
At around 18.00 each evening you are invited to the days briefing one in French other English. We are lucky as our rep Dave goes and gets the low down on problems and tomorrows start time etc. Advised 7.00 am start, temperature around 4C – dam cold and early. Breakfast at 5.00. Starts about 500m away.
I arrive at 5.45 and scoff my breakfast down but unlike rest this old bugger is ready, the youngsters come down in casuals so have to go back an get changed, (like on autumn tour= ala J.K.). After eats it’s bring bags down for loading into the velocipede and ride down to the start village. We are dressed in almost winter gear including full gloves and you need it.

Today’s stage 3 takes us from Val D’Isere to Serre Chevalier, via Col De I’Iseran, Mount Cenis and Col De I’Echelle. around 164Km
When we start its still dark but as we climb the sunrises and the views on the I’seran down to Val D’Isere
are out of this world. 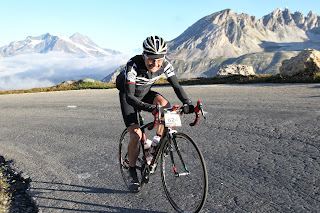 Near the top of I’Iseran with gloves, over shoes its cold (roads almost as bad as UK?)

I suspect the summit temperature was around 0C. The descent is initially dodgy, it’s so cold I pass riders freezing and stopped, rubbing body parts, me thinks they need P.G’s recipe (massage with fish & chip paper). Into the vaniose national park through beautiful scenery. Up Mont Cenis pass a lake and on the longest descent of the event (around 35km) into Italy we arrive at Suzy. What a temp change around 30C.
So its strip off and shuff everything in pockets and up my jersey. Guess I look like those images of domestiques carry many bidons?
We now have a 35km gradual climb back into France to start the last serious ascent of the col De I’Echelle.  It’s a narrow road, no traffic, steep +10% in places. I climb the steep sections in bottom gear 27 x 34. A long gradually descent follows through the world heritage town of Briancon and onto Serre Chevalier.
Bugger me Irvine’s already arrived, pleased to say he’s been back at least 15mins before me. Still I do give him 20years but we will not dwell on that, wait for the time trial?
The digs are well I wont rush to go back although the foods OK. And we have plenty time to down a few beers.
The next day’s stage is from Serre Chevalier to Pra loup.
Highlights were the Co de I’Izoard, Col de Vars and the finish up to Pra Loup ski resort.  The I.Izoard lunar landscape was different otherwise another day with 3 major climbs. We have two nights in Barcelonette at the bottom of the Pra Loup climb. After a few beers it’s in bed at around 10.00 ready for the time trial up la Bonette.
Stage 5 Time Trial up La Bonette
The format is start individually at 20 sec intervals in reverse position order (I’m in the 350 to 400 position pool) on a time trial ramp through the timing mat. 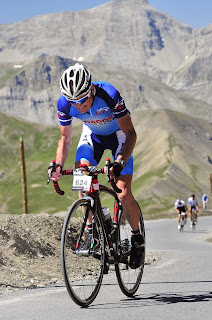 Near 14% summit had to get out of saddle?

The climbs approx. 24km long around 7% average gradient.
I set myself a target of 2 hours, J. Irvine’s around 20 places behind me saying he’s not going to kill himself?
I start slowly 20 sec’s in front his a German youngster he eventually finishes 1 min ahead of me. Checking my Garmin I show around 1hr 49mins. Irvine say’s he’s under this time? In the evening I check the times on the Internet and as I recall I finish in 288 position, ok, better still I’m 1 min ahead of Irvine. Time for some banter and beer.
Dave (sports int. rep.) informs us police have requested neutralized sections on two descents tomorrow due to terrain and road conditions.
Stage 6 Pra Loop to Auron, highlights are: Col de La Cayolle, Col De Valberg, Col de La Couillole and the climb to Auron.
The Cayolle climb is the first and days longest up a very narrow road through unspoilt moorland countryside. After the Valverg we descend through very deep gorges, around hairpins with sheer drops with limited safety barriers plus the road surface is abysmal. No wonder it’s neutralized although most descents were to me anyway. Before the final climb into Auron we have a long very gradual ascent, a group passes me and I get sucked along, with around 20Km to go I have a front wheel puncture.  I can’t find the cause, no flint/cut in tyre? Eventually I insert new tube and I’m away again. I arrive in Auron and head for the end of stage meal which todays in a sports hall. Scoff it down sort myself in another ski type chalet hotel for the shower, evening meal and beer.
Dave advises us we start the final stage at 7.00 again so its breakfast at 5.00. Seemingly we have to make Nice for around 12.00 to avoid a storm and the Col De St Martin climb will be eliminated to ensure we get back to Nice early.
Final Stage: The first 50 km are under police and marshall’s motorbike escort. With a gradual decent most of the way we are moving well. Eventually we hit the timing mat to start riding proper which leads into the Col De Vence climb. The gradient isn’t severe but it goes on for about 20km when to my surprise we hit the summit we have finished the final timed section of the event.
We descend down to a small town whose main square is taken over by the haute route organization. We collect our medals and parifanalure.
Eventually we are on the main coast road to nice were we go through another finish area at the end of the Promenade des Anglais in bright sunshine no sign of the promised storm.
How did the old bugger do?
My overall time for the 7 stages: 34 hours 50mins 47secs, position I think was 344 about 12 hrs. behind the ex pro winner. The organization stated that a French man was the oldest finisher (70 years old) maybe I was?
I think i finished 8th in the O60’s section. But I managed to get round without getting into the red at what might best be described at a reasonable club run pace. His it the toughest multi -stage sportive?  I doubt it but I enjoyed the experience, ride, digs and the beer at each stage arrive.
Now if my ramblings have created a desire but you want something tougher then enter one of next years cent col challengers (they do 50,000m climbing and 200km per day, is it over 10days), check them out on the rapha web site, you might need financial support?  – this should keep Peter happy.
Cheers old buggy JG

Posted by John G at Monday, November 25, 2013 No comments: Links to this post