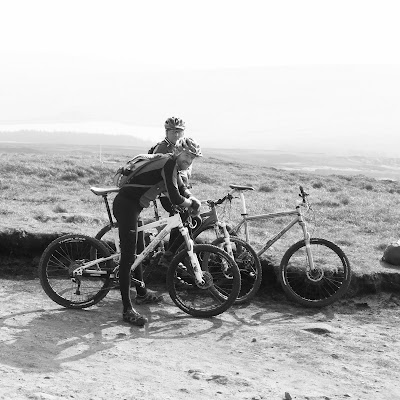 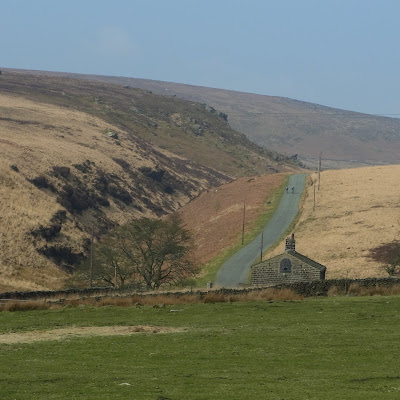 Whilst the traditionalist, stiff backs were venting themselves hard on yet another ride through Keighley and into the Dales, the Condor Off-Road Club (Luddenden Valley Section) took to the rich tracery of dry trails round 'ere abouts Hebden Bridge way, weaving in and out of this and that: sheep, hippies, ramblers, sheep, gates, sheep.

First insight of the day went to Nigel who observed how, when riding dry trails, the stones appeared looser, nay they became errant, dangerous libertarians, freesayers, Levellers, who without notice to their betters would simply jump up from the ground and irritate the steady, patrician, well-appointed rider from atop his hiearchy, with neither by-your-leave nor tugged forelock. So it is not only sticks that the cautious cyclist must watch for, but stones as well. We hastened to some tarmac round Widdop (as in pic) for respite.

Second insight to Ian, who noted how a mental image (in this case the bacon and egg barm held on promise at Heptonstall) can grow without conscious control, first in content (in this case to include sausage), then in size (to become really quite large, perhaps preluded by some cake), until finally becoming the only object of concern to a knackered mind (when riding up to Mays at the end of a long long stretch the barm had become to all intents and purposes a direct equivalent to the entire world).

Last insight is mine, commenting that the less you think the better you ride ... don't aim, don't steer, don't look at obstacles ... it was mentioned that if thoughtlessness was a qualification for riding well I should be just fine

So we went on, all of us that little bit more intelligent ... or less, maybe
Posted by robin at Wednesday, March 30, 2011 No comments: Links to this post