Sorry Robin I was trying to add this Fay Godwin photo to the end of your report but it refuses to go anywhere but here - I prefer your photo anyway. 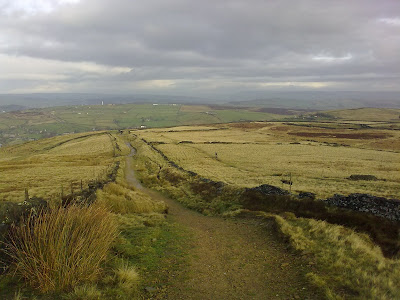 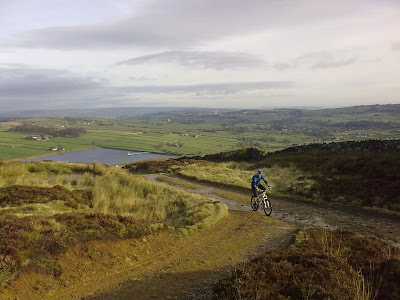 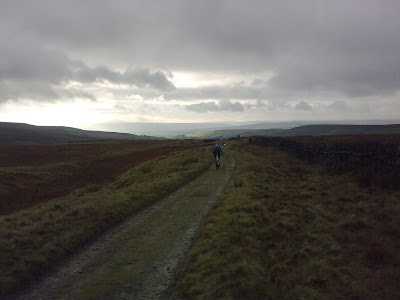 Thrown underneath a hastening notation of staved clouds being pushed along by of the brisk pace of an east wind, we - that is condor off road club - took ourselves off over to Ogden - the never ending wall (for the waller) had had a little more completed, and as if in a kind of comical echo of this effort, the decaying farmstead just beyond had also born witness to some building work, though here the job - paving - might well have scored a little lower were some aspirant Saturday night tv gameshow judges to come passing by with their numerical paddles and acid hyperbole: 9 for the wall, 0 for the paving me thinks. Ogden cobbles were very wet, but not as wet as the rest of the ride, during which we spent much time talking about warm socks, overshoes, plastic bags, dry shoes, hooves, anything in fact that we could use in the stead of what we actually had. Our feet excepting, the ensuing ride was exacting in the best possible sense, one of wheel sucking technicality that had us on always on the edge, or in my case over the edge and onto my head-arse (not sure which hit first), twice. Obviously I was inhabiting the limits of possibility, warning others of the risks through a staged occupation of the possible hazards en route, thereby preventing greater harm to my companion. Others may have misread this noble act as bad riding, but such is the life of the unsung and noble. My reward is my constancy.

The last shot looking toward Heptonstall is from way above The Stairs, a bad camera phone homage to Ms Godwin, whose 'Land' series is showing currently at the National Photography and Media Museum down Bradford way.
Posted by robin at Sunday, November 14, 2010 No comments: Links to this post