Not many of us out on Easter Sunday, Big Phil, Paul Daly, Oakworth Steve and myself were joined by VS's Irish John and Dougie.  Because of frozen meltwater on some back roads we decided not to go over the Tarn road and Darnbrook and instead towed about 20 or so Milnes guy's up through Cracoe before we turned off to go to Burnsall Cafe via Linton. We were at the cafe by 10.30 which was good because it was soon bursting at the seams.
Our return journey took us at a far too fast a pace through Appletreewick, Cavendish and Ilkley down to Otley. Then up the Chevin, down through Esholt to Shipley and Saltaire from where we went up the ramp past the golf course and down to Sandy Lane, Egypt and Keelham, the VS boys ripping my legs off. 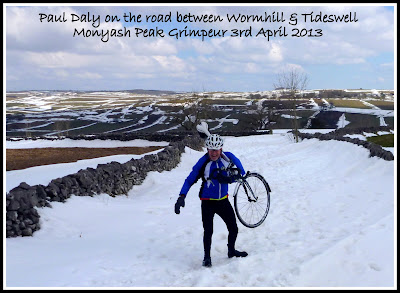 Despite my legs not having recovered from Sundays ride Paul and I rode the Monyash Peak Grimpeur from Marple on Wednesday. There were 4 sections similar to what you see in the above photo including the renowned Goyt Valley. Paul and I were the only completers from the 40 or so entries, many having elected to join Peeps, Paul H and Everard on the alternative 'Icecream Wensdae' 100k event in the Cheshire Lanes.

Its the Ronde van Calderdale this Sunday, thankfully most of the snow has now gone. We have several riders, Mel, Phil, Damian, Adrian Lord and myself plus Paul Daly, Sean, Chris Thompson and plenty other familiar faces - entries on the day are being accepted. 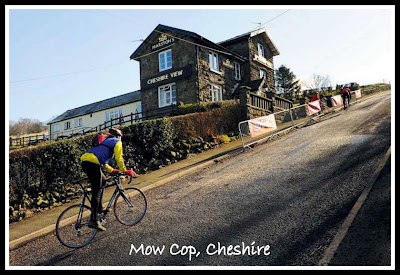 I'm fancying riding the Macclesfield Monster Sportive on Saturday the 14th, it looks like an interesting route in and out of Cheshire, Derbyshire and Saffordshire with many well known climbs such as Flash, Axe Edge and Cat n' Fiddle plus Mow Cop, a climb with a big reputation but one I've never done before but often heard about.