Better Late Than Never?
I'm sure all you ever present bloggers (e.g.Peter). i (Grimpy) only performs a blog every blue  moon.
Having just posted the Race race stuff i thought what the hell i will do a quick one from Louisville. Well i will even try to insert some pics. Here goes! Well it started that way an hour ago? 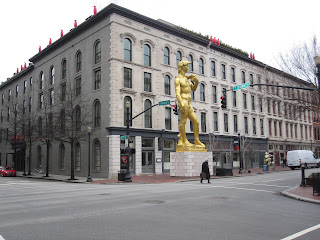 Cool spot,last years art work was a large chevy. Great place to stay local sandwich shop says theres a 21C in London? Anyway if your ever in Louisville go to the 21c loo. The urinal as a waterfall with eyes watching you? This is were the Belgium team had there dinner one night, tried to crash but no chance.

Arrived Saturday and as last year knackered weather fine around 32F (don’t do C in USA). Sunday got bike together and road out to the course. Course conditions were superb, firm no rain reminded me of Sutton Park (used to be the Nat champs venue in Birmingham). Shown around by a local 55 year old star who advised me to look out for a Tom Sailor who was the American top dog in O70’s, whilst managing a lap in 8 min’s. We were even able to climb a grassy bank with an elevation of around 20%. All would change, we were allowed back on the course to train on Tuesday but after overnight rain, conditions had deteriated, normal slipping and sliding and the grass bank was well like pete’s peel park shot unrideable. But with the right lines I managed a lap in 10mins. Often you get guys who say why does it turn you on all that muck and mud? For me it’s like getting into a zen zone, the skill and concentration required well dare I say it’s likes a drug. Trouble is all the technique goes out of the window with fatigue and poor form. You are aware you have to keep on the top of an off camber slope, you also need to look at the exit of a corner to get around smoothly and to continue turning the pedals instead of braking into a corner to acquire grip but do you? When you are in the zone and have the form it does, believe me all come together. Well we can dream, guess you need to ask Wiggo or Brian when they are time trialing or Nibali decending what zone there in? Back to the trip, as an aside I stay again in the 21C museum Hotel, not just an hotel but a mini art centre (see comments above). The Kentucky people both at the hotel and indeed anyone I met were kind considerate and interested in you- I never heard – have a nice day- honest?  Obama must have trained them?

By Wednesday the weather was balmy, it got to 70F and after an overnight storm which blew the course apart besides depositing the marque down the venue, races started 2 hours late. The course was now water logged but because of the depth of water the mud seemed to wash clear?
Riding back down River Road a Belgium (Bert Welliens ex world champ) fly’s passed me tooked in behind a scooter guess doing at least 40 miles per hour, he would finish fourth in the men’s elite race on Saturday.
I return to access prospects for my race tomorrow. The weather was nose diving with the forecast freezing (32F) for early morning? So it’s back from shorts to full winter gear. Then remembered never signed in when I collected my number, back to headquarters to enquire told no problem you are digitally signed in? I now I’m 70 but hopefully not sienial, I just gave in guess its like all this internet stuff just tick it to say you agree otherwise you hit the stop sign. Then I open my big mouth having a number three (2 age groups were in the same race) are we a different colour? No we are going to give out new numbers tomorrow morning -when- from about 8.00 a.m. Me thinks great there’s 3 numbers to fit 12 pins etc all you need my chimp won’t be happy?
The Big day
Up early 6.30, breakfast and ride out dam it, it’s still dark and freezing but at least no snow, why do us old gets race this early? Arrive at champs park at 8.00. Unlike last year when Phil Roach and his son were present, there was no support except Anne (Vic Barnett’s wife) who would be looking after Vic, so I needed to sort out a spare bike from Sram, organise and leave it with a young lady mechanic, promising to return. Back to start line to enquire about numbers? Nobody as a clue, so into marque where surprised to find cyclo op turbo’s available for warm up. Start warming up next to an American I recognise from last year’s trip he was on the podium in 65+ age group and he’s now in our group so I say’ guess you are favourite?’  Replies, no there are two other american’s who beat me in my last event. Still I note his warm up seems much more serious than me he’s even removing top layers and sweating?
I keep stopping to see if numbers have arrived but no sign. So with 15 mins to go I decide I had better pin my original numbers on? The chimps in charge and I make a right arse of it? Just has everybodies going to the start grid I manage to get my numbers on, by this time I’m cold. Guess what numbers arrive with commissiare’s explaining we will have to change your numbers- great! Me thinks I could more easily have controlled the chimp had I put my numbers on last night. The 65+ age group are gridded first followed by us who are all having new numbers pinned on as we move to our start grid line. Finally I am pinned up and the 65+ start, we follow 30 secs. later.
The start is on a new hard core section which continues just beyond the finishing line, you then hit the grass well its really mud or a better description GLUE. I slow down but am surprised to find I’m at the front but its so dam painful. The best analogy I can think off is when you are on your turbo with too high a gear, its like pedalling with the brakes on. I’m now with no 41 who passes me and we alternate positions until we hit the pits when the winner passes us at a fair rate. I know what I have to do but my bodies struggling its not going into oxygen debt, it’s just lack of power/strength? I leave no 41 but I’m making no headway on the leader. Through the back side of the pits over the planks and up the hillside. Jesus the bikes got heavy, onto the incline off camber, down a tricky decent and back up the slope for the crazy decent to the finishing line. I pass the finish push on but can’t engage gear?
If you have ridden your mountain bike in the snow you will have had this problem the blocks full and the chain just spins around. In this case the mud/glue which as pick up which is frozen and compacted between the sprockets. Eventually by staying in the same gear position I engage and can move forward again no 41 catches me again but I manage to lose him but i keep getting no drive. Sod it the technique is simple keep in mid gear and don't change otherwise it wont engage.

Last lap everything seems to have seized up so i go into the pits can't find the spare bike but get a similar size SRAM bike, a bit high but at least it moves freely. Look behind and its a big gap to the next rider so its just dig in and finish.

Bike (white one) ready for wash 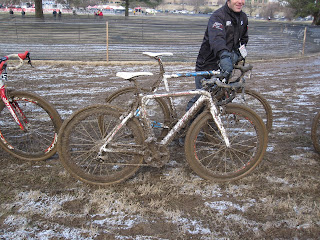 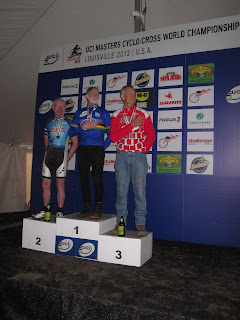 Podium - I'm so dam clean because presentations were a few hours later and my skin suit was only clean gear i had. Note how the americans stand to their anthem?
Posted by John G at Monday, April 01, 2013